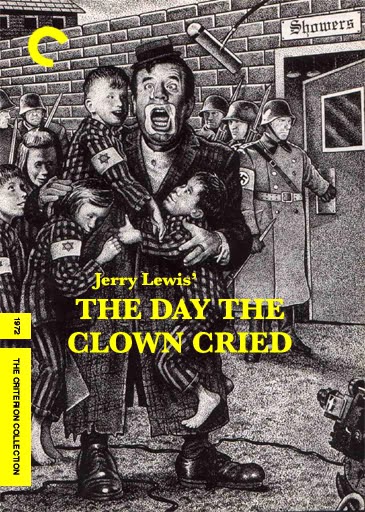 Can you make a movie about clowns and the Holocaust?  How about three of them?

One of the oddest aspects of the 20th century was the production of Holocaust Clown Movies.  They are at least three that I know of, one that went on to become a box office success.  The third was pulled from release and every copy destroyed as it was an embarrassment to its writer, actor, and director, Jerry Lewis.

At first, the Holocaust would seem like an odd topic for a clown movie. But not only has such a movie been made, but has become an actual genre.

Most people will remember the movie Life is Beautiful, which was written by, directed by, and starred Italian comedian Roberto Benigni.  In that movie, Benigni acted the clown in order to alleviate the fears of his young son as the Nazis systematically exterminated Jews in Italy.  To try to protect his son, he tried to convince him that it was all some sort of joke or act going on.

Sounds like an appalling theme for a movie, but it was handled deftly and tastefully and became a major box-office and critical success, as well as winning a number of awards.

Hollywood has a long history of copying films and genres. One studio comes out with a movie called Tornado and another will copy it with a movie called Twister - or maybe the other way around.    So shortly after Life is Beautiful won several Academy Awards, Robin Williams was drafted into a very similar Hollywood production called Jakob the Liar.  Not only did this film attempt to ride the coattails of Life is Beautiful, but itself was a remake of an earlier film (bringing the number of Holocaust Clown movies to at least four - five if you count Adam Resurrected starring Jeff Goldblum and Willem Dafoe).

Again, we have a clown-like character who lies to deceive other people to assuage their fears about the coming Holocaust.  Although set in Poland and not Italy, the plots are very similar in nature.  This movie was not as successful, even though it was very similar to the earlier Life is Beautiful.   Maybe imitation isn't the sincerest form of flattery.

The original Holocaust Clown movie, was even more poorly received.  Jerry Lewis decided to star, direct, and ultimately produce a movie known as The Day the Clown Cried, which has taken on legendary status. Lewis has tried to bury the movie, although some outtakes are available on the internet. The few people who have seen the movie have decried it not only as horribly done but wildly insensitive to Holocaust victims.

While Life is Beautiful and Jakob the Liar have clown-like characters, they are not actual clowns in clown makeup.  And maybe that's where Jerry Lewis went too far, juxtaposing an actual clown into the Holocaust, which provided a jarring disconnect.

Perhaps we'll never know exactly how bad The Day the Clown Cried was, as it seems that Lewis has successfully been able to suppress it.  Apparently it wasn't even well-received in France, where Lewis is revered.

Although Life is Beautiful saw box office success and was critically well received, I doubt there will be many more movies in the Holocaust Clown genre.  As Jerry Lewis' experience has shown, it's a difficult fine line to walk when addressing such serious subject matter with humor.