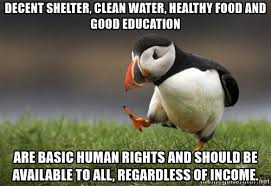 Putting up a meme or making a conclusory statement that you are entitled to certain things doesn't make it true.  Sorry!

People on the Left elected Donald Trump.  How?  By being radical leftists and scaring the crap out of the rest of America.  Every time some "anarchist" leaves his parents' basement, puts on a balaclava and tosses a Molotov cocktail at a McDonald's (but never a Taco Bell!) to protest something or another, the far-Right gains three new supporters.   America doesn't want to go commie, and the Democratic party has sadly been hijacked by a far-left agenda.

(Of course, conspiracy theorists would wonder whether these masked terrorists were not, in fact, College Republicans, bent on a false-flag operation.   But we don't truck in conspiracy theories here!).

Some of these folks on the far-Left post messages and memes that claim that that food, clothing, shelter and even health care are "basic human rights" that should be available to anyone, regardless of whether they work or make a "profit" for "big business."   This would come as a sharp surprise to our founding fathers, to be sure - and to a whole lot of other people.

The revolution that started this country was started by the middle-class and landed gentry.  Their beef with England wasn't free food, free houses, free healthcare, but merely the right to keep the fruits of their labors, and if taxed, have a say in how those taxes are collected and spent.   And yes, they were first-class hypocrites, too, owning slaves (who toiled but never gained).  They also kept those who didn't own land or have wealth out of the political system.

When our Constitution was written and adopted, it was quickly amended to include a "bill of rights" and while those first ten amendments set forth a lot of "rights" for individuals, free food, free houses, and free healthcare are not among them.   Indeed, "free stuff" isn't anywhere in our Constitution.

Indeed, the thinking of that era was that people should have the right to lead their lives in as unfettered a manner as possible.   In The Rights of Man, Thomas Paine argued that government's sole purpose is safeguarding the individual and his/her inherent, inalienable rights.  Nothing in there about "free shit for everyone!"

Somewhere along the line, a younger generation decided that "basic human rights" included the right to not have to work for a living and to have all your needs handed to you by the government.   This is, to say the least, a perversion of our heritage and what are commonly believed to be "human rights."

Our founding fathers envisioned clearly a society where you had the right to starve to death or die of exposure if you didn't take care of yourself.  And indeed, in the early part of our republic, it was quite possible to do both of these things, through poor luck, circumstance, or lack of effort.   Laws were passed to try to help those who fell down the economic ladder, and over time, these have evolved into a number of government agencies and programs that provide a host of services and "entitlements" to people.   But basic rights?   Um, no, these are laws, enshrined in the United States Code, not in the U.S. Constitution.   Congress, if it desires, could cancel these entitlements or adjust them at whim.

And in fact, it has done so, changing traditional open-ended "welfare" to something called "TANF" where the "T" stands for "Temporary" - you can only collect modern "Assistance" (the "A") for five years in your lifetime.  After that, you are on your own.  Hardly a "right" is it?

The "NF" stands for "Needy Families" and thus there is a "needs test" on welfare these days - you have to show you are looking for work or unable to work.  You can't just show up and say, "gimmie money" under the present system.   And perhaps this is why the far-Left is proposing asinine things like "guaranteed minimum income" in order to subvert existing need-based welfare schemes.  Even food stamps - one program receiving a lot of criticism these days, has a work requirement.

While some folks have argued that access to health care is a human right, not everyone agrees that all healthcare should be free.    Some countries have tried making it free, but the problem with free health care is that eventually, someone has to decide how much you get for free, as there is only so much to go around.  And perhaps this is a fairer system than determining who gets the best health care based on income, but even in countries with "nationalized" health care, the very rich can still go to private doctors or indeed, fly to other countries (often the United States!) for better care.

I am not sure how this "we all get free shit" thing started, but it seems to have taken hold in the minds of many people, mostly folks who smoke a lot of pot and would rather not work for a living, methinks.  While no one wants to see people starve to death or live on the streets, even the most simple-minded person can see that an "everything is free" model of society simply would break down rather quickly, as people decide that working really isn't all its cracked up to be, if you can just stay home and get free stuff.

There has to be some incentive - both carrot and stick - to get people out of bed in the morning and off to work.  No one likes having the wolves at the door, but the threat of poverty and job loss seems to be one instinctive thing that programs our brains to work.  Idleness often leads to depression, which is another reason why "free stuff" is a bad social model.   People will find things to do, often anti-social things, if you tell them they don't have to work for a living.

This is where the Leftists chime in with "Well, surveys show that people work for reasons other than money!" which is wrong on two counts.   First, we don't rule our country based on surveys, except one, called voting - something else the Left forgot about in the last election, what with their hissy-fit protest votes for Jill Stein.  Second, such surveys are suspect - yes, people will say this, but they really work for a paycheck - we all do!  While most people who work do get non-monetary satisfaction from it, it is the paycheck that keeps them coming back.  You can't eat "job satisfaction" nor should the few who enjoy working have to subsidize the many who'd rather not.

And yes, we do have homeless people in this country, but not because we are a heartless society with no safety net.  There are huge safety nets out there, but there are people with severe mental health and drug problems who chose a life of begging (and extensive public assistance) over that of working.  As the shoeless beggar story illustrated, you can get a good gig going out of being the "shoeless beggar" while commuting to "work" from your apartment and receiving food stamps and other forms of government assistance.   Think about this before you hand over cash to some guy with a cardboard sign.

What with food stamps and cheap food, we have the fattest poor people in the world.   Funny how that works, ain't it?  Meanwhile in Socialist and Communist countries where people have a right to government-priced food (which they still have to pay for), they literally are starving.   Breadlines are common in Communist countries (and Comrade Sanders says this is a good thing!) but in the land of opportunity, we throw away bread after a number of days as it has "expired."   Do we want to go to the Venezuela model of economics, when it has been shown to be a miserable failure?  Sure, you can prop up individual countries on oil revenues - for a while at least.  Once the oil money goes away, well, what then?

When you tell people they will get stuff for free without working, they tend not to work.  On the other hand, when you tell people they can make as much as they want to - and that they have to if they want to get ahead, they tend to work their asses off.    So in America we have abundance not in spite of capitalism, but because of it.   In Communist countries, they have shortages not because of capitalism but because of a lack of it.   Every Communist country that reverts to a capitalist system ends up booming economically - and China is the prime example.

Is our Capitalistic system fair?  Of course not - no system is perfect.  And that is one reason why we are not a true capitalist system - we have a quasi-socialist society with a plethora of government programs and safety nets in place, as well as a progressive tax system.   In fact, the largest single payout the government makes is to fellow citizens already.

Well, maybe it is not so much people on the Left as it is Russian troll farms.   We know now what we've always suspected (but actually knew, really) that all governments try to affect public opinion in foreign countries or even foment revolution.   We did it, though the CIA.  The Russians did it, through the KGB.   Today, the Russians have entire operations online posting messages on everything from Facebook, to Twitter, to Reddit, to YouTube.

Some of these posts are toxic troll-postings that start wild conspiracy theories.   Others are more subtle - encouraging far-out political views among naive college students.   Where did you think the idea that the college cafeteria serving tacos was practicing "cultural appropriation" came from?   The idea is insane on its face.  Under that view, the only thing a cafeteria could serve is white bread, lest they offend some  "culture" by making anything else.

In short, this is an attempt, I believe, to divide us from within and also weaken us.   If they can get a substantial portion (or even a vocal minority) of people to squander a decade or so of their lives believing in "free shit" they can create chaos and division.   And I say a decade or so of their lives, as most young people fall for this nonsense in their youth and then sober up and realize the ridiculousness of it all, not too much later in life.   It happened to the hippies, it will happen to this latest generation of "anarchists" or whatever they call themselves.

No, a society cannot survive based on handing out free stuff to everyone.   And maybe that isn't fair, but it is the only workable solution.   We do hand out a lot of free stuff already, based on need, not based on your ability to breath and have a pulse.   We have foodstamps for free food.  We have public housing and section-8 housing for free places to live.  We have Obamacare and Medicare for free health care.   But the freeness of these things is based on a demonstrated need - your lack of income, lack of job, and/or lack of ability to work.

Young people in the prime of their lives, with the ability to work, don't need free shit.  Sorry, but that's the long and short of it, and generations of people had to deal with this, put down the bong, and find a job.