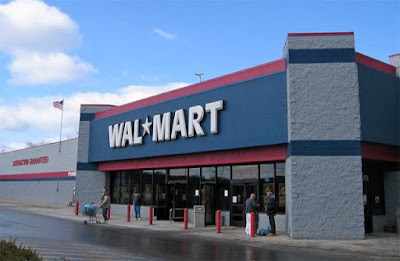 The advantage WalMart has over Amazon is that there is a WalMart in every town.  This could make a big difference in terms of customer service.


I have ordered a lot of things on Amazon lately.  A new water heater for my camper.   A set of tires for my truck.   Hundreds if not thousands of dollars worth of things over the last year or so, that cost far less on Amazon than at the local stores.  They are good bargains, and for the most part, the process is painless.

There have been glitches.  I ordered something online once and received a toilet instead.  The item arrived the next day, but I was curious as to why they shipped me a toilet.  I called and told them and they told me to keep the toilet.  But it was the base only, with no tank, so I had to use for it.  I sold it at a garage sale for $5.

There are chinks in the armor - and no that is not racist anymore than the word niggardly is.   Grow up.

Yesterday I received an order - actually two orders.  I had ordered some LED bulbs to replace incandescents, as they old-style bulbs get hot and also burn out over time.  LEDs save energy, if you can get ones that don't look like florescents.  A week later, I ordered some drip irrigation items.  Amazon waited a week to fill both orders, combined them, added some LED bulbs I do not recall ordering, and forgot to include an RCA video cable I ordered for a portable DVD player I have in the camper.

More chinks in the armor.  My order sat for seven days and then they combined it with my second order, put stuff in I didn't order and forgot stuff I did.   On their online "help" section there is no "help" other than to call them and tell your life story to someone who can't help you, get transferred to India and then tell your life story again, and then have a return authorization made and then manually re-order the missing cable with a promise that the shipping charge will be refunded.  We'll see how that works out!  I am guessing the shipping charge won't be refunded and Amazon will rely on the wear you down technique to get me to eat shit and grin about it.

More chinks in the armor.

But as I noted in an earlier posting, WalMart is hot on their heels and has a website just like Amazon's but with the option of direct shipping to the store - with an associated discount.   WalMart is thriving while Sears and other retailers are failing because WalMart has a grocery store and thus there is a compelling reason to visit this "brick and mortar" store on a weekly basis.  Some folks make an outing of it - Dad gets new tires, Mom has her hair done, the kids get new glasses, they all sign up for Obamacare, get their taxes done, eat lunch at McDonald's and buy new clothes for school, as well as load up on groceries and that new big-screen TV Dad wanted (as well as a new shotgun).

Who says the mall is dead?  It was just renamed "WalMart" and doesn't have a fountain.

I bought the truck tires from Amazon because I felt they had a higher trust factor.  After two messed-up orders, the trust factor is eroding.   Combining two separate orders smacks of cost-cutting, and since Amazon isn't making much money, I suspect that is the reason behind the orders being combined.

Now, with shipping to store and the associated discount, I think I would have ordered the tires from Wal-Mart, if the discount had been offered, as the retail prices were identical down to the penny.  It would have been less hassle, too, not having to schlep the tires to the store from home.

But there is another window of opportunity here for Walmart - customer service.   When my order was shipped wrong, the only recourse was to call Amazon and be transferred to a telephone operator in India.  Walmart has stores in every State and nearly every County.   It might be a selling point to offer customer returns at the store rather than have customers have to schlep things to the UPS hub with return labels and all that nonsense.

Just an idea, Walmart.  I'm a shareholder here, and would like to see you kick a little Amazon butt!


UPDATE:   Ordering online is based on TRUST, and one thing WalMart doesn't try to do to me is trick me into joining Walmart Prime as they don't have such a thing.   Amazon is always trying to trick me into joining "Amazon Prime" by saying it is "free shipping" and when I say no, they say, "you are sure you don't want free shipping?"   But the deal is, you can get free shipping without Amazon Prime, so they are lying a bit here.

And what did I say about entering into any business transaction based on a lie, no matter how trivial it is?  The relationship can only go downhill from there.

Amazon, I think, I will keep at arm's length from now on.   They've shown their colors with their Prime promotions, and I should have taken that as a sign.  That and the toilet.
Newer Post Older Post Home