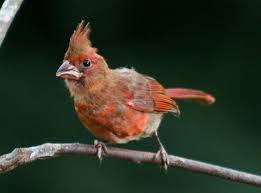 
We have a number of bird feeders and a bird house in the magnolia tree in front of the porch, and in the morning it is interesting to watch their behaviors.  Breeding season is about over and many of the birds are proud to have new families to show off.   The Carolina Chickadees raised a clutch of eggs in the bird house in about two weeks, weaned them in another two, and then tossed them out of the bird house and told them to get a life.

Cardinals are another story.

A juvenile cardinal may take a year or so to "grow up" and live on his own.   Given their longer lifespan, this is not surprising.   And it is interesting to watch Dad Cardinal, in all his resplendent red glory, trying to show junior the fine points of flying, landing on feeders, and feeding himself.  The juvenile cardinal chirps incessantly, saying, "Daddy!  Feed Me!" while wiggling his wings in a pathetic display.  The Dad Cardinal gets some seeds and then feeds the juvenile, putting the shucked seeds into his son's mouth.

We can tell it is a male as it is grey and has a black beak.   What is interesting is that the juvenile is nearly as large as Dad, and is clearly capable of flying and even landing on the feeder.   But when he lands on the large platform feeder, he absentmindedly pecks at the seeds and then chirps and flutters and waits for Dad to feed him.

It is an interesting pattern of animal behavior, one that is likely present in a number of species, as we are all cut from the same cloth of complex chemicals.   Baby birds as well as baby anything else (even crocodiles) look "cute" to us, with their odd proportions, large eyes, big heads and whatnot.  It is instinct, bred into us since before we were humans, to want to protect and cuddle and feed the young.  The species that ate its young or did not take care of its young does not survive to reproduce.

Of course, it is a delicate dance, this raising of young birds.   The Chickadees had several babies, so I guess they gave them the basics on flying and feeding and said, "good luck" - figuring that a number would probably be eaten by predators or fail to figure it out within the first week or so.  The Chickadees rely on safety in numbers as an approach to survival.   The Cardinals, on the other hand, seem to have fewer kids, and in fact, Dad appears to be rearing only one that we can see.   So maybe they have more invested in that one kid.

Interesting thought.   When you have 12 children (which was not unusual in the Catholic town I grew up in) you expect that maybe you will lose one or two to accidents or illness.   In the not-too-distant past, nearly every family lost a child or two to childhood illnesses - that was the norm in the 1800's and early 1900's before antibiotics and immunizations.   Oh, right, they cause autism.  Silly me.

I grew up in a family of four children, and my older siblings, when they were the only two kids, received the hot spotlight of parental attention and suffered in the glare of its intensity.   Their every move was questioned and counseled.   They were told what to do, what to wear, what to study, what sports to play.   It wasn't that my parents were dictators, but that they had a tenuous grasp on the middle-class as it was (not much has changed in 70 years!) and wanted to make sure their kids succeeded in life.

By the time my brother and I came along, they were less concerned about our future success and spent less time trying to micro-manage our lives.   As I recounted before, my eldest brother, who was something of a sensitive artist type with a physique better suited to ballet than football, was forced by my Dad to go out for the sport, even as he warmed the bench most of the time.   My next eldest brother was coerced into playing "Pop" Warner football, which he didn't like, so he quit - and my Dad berated him for weeks over that.   When I was of that age (and I am built like a linebacker), my Dad merely suggested I try out for it, and I soundly told him, "no way, Dad!" and he quickly backed down.  The urge to "parent" had been pretty well beaten out of him by his repeated failures at the game.

But perhaps this pattern illustrates why today we hear stories (and they are anecdotal stories, which are often suspect) about "helicopter parents" who "hover" over their children, convinced that even the slightest mistake in their lives will lead to a bleak future.   If the kids are not accepted at the right pre-school some of these modern parents have a meltdown.  After all, how can you get into Harvard if you didn't go to the right Montessori school?   Like I said, these are anecdotal stories, but maybe there is a nugget of truth to them.

And maybe the reason for this is that folks are having smaller families or at least folks in the middle and upper classes are.   Your typical middle-class family today is only two kids, maybe three, and as a result, like my older siblings, the parents spend more time "grooming" their kids for life, just as the Dad Cardinal spends an inordinate amount of time invested in his one spastic son (who frankly, I think is autistic).  He has a lot riding on this one outcome - the survival of his genome.

Other families, with larger numbers of children, just don't have the time and energy to spend on grooming all of the kids in the same manner.   And with four, six, eight, or more children, you can pretty much expect that some will do well, some will do OK, and maybe one or two will end up dead or in jail - you play the odds, like our Chickadee friends do.

I am sure there is more to it than that, of course.  If you have five or six kids, you can't afford the time, money, and space to have a "bounce-back" kid living in the basement until he is 35 - flapping his wings and chirping for Dad to vomit some pizza down his gullet.  You have other things to do - like raise a whole flock of other children.   So, you boot them out of the nest and let them figure it out.  If they fly, great, if not, well, the possum and raccoons will have a midnight snack.

There does eventually reach a point, however, where even Dad Cardinal has had enough.   Mom has a new clutch of eggs to incubate and Junior isn't helping matters any.  It may seem cruel, but eventually he dive-bombs his own son and chases him away from the nest - forcing him to live in the cold, cruel world and figure things out on his own.   But hey, there is a girl Cardinal in the tree next door.... maybe they can build a nest of their own!
Newer Post Older Post Home