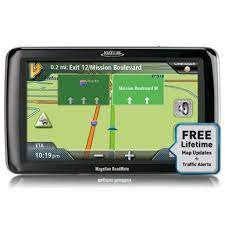 Since most modern electronics have a lifespan of only a few years, you can offer "lifetime" updates bundled into the purchase price, rather than charge subscription fees.


I have a very old Magellan GPS in the truck.  It is a Magellan 9212T-LM with a 7" screen, which was large for the time.  As I recall, it was $149 at Wal-Mart.  Of course, no one uses standalone GPS units anymore, not since the smart phone incorporated this technology.   Why bother using a standalone GPS or even one built-in to the car, if you have one on your phone?

What was interesting to me was that when I bought the unit, one thing that attracted me to it was it had "free lifetime map updates!" on the box (as well as free traffic alerts).  And recently, I updated the unit (for the first time since 2017) which was a bit of a PITA.  They have some new sort of software called "Smart GPS Echo" which required me to update Firefox, but now Firefox no longer supports Java, which is a problem, because the USPTO still uses Java.  And of course, "Smart GPS Echo" didn't work until I had a "chat" with a customer service rep, who unlocked my account or something.  Anyway, two hours later, I have updated maps.  I updated the UVO software and maps in the hamster at the same time - this was more seamless, but a four hour affair to download and format the memory chip.

(The free traffic alerts are handy, and not something I would pay extra for.   However, they don't seem to really point out very accurately where traffic jams are, depending on where you are in the country.  And yes, I wrote a Patent on this technology back in the early 1990's).

But it got me thinking, I might be one of the few people who have one of these GPS units and is still using it (although it still is apparently for sale).  Most went in the trash long ago (and this one might go there soon - dashboard temperatures seem to have driven it mad, and it may be getting flaky.  It locks up on occasion, which is why I wanted to update the software).   So the "lifetime" free map updates are not forever, but rather for only a few years - the life of the product, not your life.

As a merchant, you have two choices, you can charge per update in a subscription model, which Magellan also does for other units, or you can offer "free lifetime updates" and increase the sales price slightly.  In both cases, you likely collect the same amount of money from the customer, particularly considering the future value (FV) of money.  $20 collected today at the sale of the unit is probably worth more than the potential for $10 every other year for a few years.

Charging $10 or $20 for an update is probably more hassle than it is worth, and it would actually discourage people from updating very often.   Note that the "free" updates are limited to one or two a year, I recall.  So it is not as if a user would update daily and drown their server or something.

However, this raises some interesting questions.   First, how long is "lifetime" anyway?  We've already seen how Microsoft and other companies abandon older software and hardware after a certain time period - often to prompt people to "upgrade" (read: spend money) on the latest and greatest.   Over time, most of these Magellan GPS units will be thrown away when they break down or just become woefully obsolete.   When you are down to a dozen customers left, is it worthwhile to provide support and free upgrades?

Or maybe the next "upgrade" ends up bricking the device - problem solved.  Um, gee, where have I heard of that happening before?  Oh, right, Apple.  Or perhaps there is something hidden in the ToS that limits their liability for "lifetime" updates to X number of years or whatever.  I probably will never find out, as the unit will likely die before I do.

"Lifetime" is one of those words like "Free" that marketers like to use to snare us, and usually there are limits to what "Lifetime" comprises.   Marketers also know that "Lifetime" warranties are rarely cashed in, as most people sell equipment within a few years, particularly after repairs.

When I was a kid, Midas Muffler used to have "lifetime" guarantees on their mufflers - as did a number of other stores.   Back then, exhaust systems were made of mild steel and rusted out within 2-3 years of a new-car purchase, particularly in salt country.   People born since 1980 simply never experienced this, and even oldsters today conveniently forget it.   When catalytic converters were introduced, the carmakers were required by law to warranty emissions equipment for 5 years or 50,000 miles - for the part up to the catalytic converter.   Suddenly, exhaust systems were aluminized or made of stainless steel, and at least up to the catalytic converter never rusted out.

Today, entire exhaust systems are made of stainless or galvanized or aluminized steel and last the life of the car, which is why I say that putting an aftermarket exhaust on your car is a stupid waste of money - you are tearing out perfectly good parts and replacing them with parts that are not made as well, will not fit as well, and will not provide much in the way of increased performance.  They are just louder and gaudier and make the car harder to sell later on.

But anyway, once again, I digress.  The point is, I read a study somewhere that said that the average car owner back then (in the 1960's) would sell their car within a year or two of putting in a new exhaust.  That would be at the five-year mark, when the car had about 60,000 miles on it and was pretty much worn out.  Cars back then were junk by 80,000 miles, which is why the odometers back then only went up to 99,999 miles.   All this nonsense about "the good old days" when cars were made better, is bullshit.  Your typical 5-year-old Chevy, Ford, or Dodge back then would be on its second exhaust system, maybe even third, its second battery, second set of tires, and maybe even radiator or alternator.  Warranties were only 12 months and 12,000 miles.   And such a car would have a number of dents, scratches, and rust, particularly if in salt country.

So most folks traded-in at that point, and they never collected on the "lifetime warranty" on their battery or muffler.  And even if they did, well, some limitations applied.   Battery warranties are often pro-rated by the number of months the battery is rated for (back then, particularly, batteries were sold as 24, 36, 48, and 60 month models).   Mufflers might be "guaranteed for life" but installation, clamps, hangers, and connecting pipes were not included in the guarantee.  You'd spend nearly as much cashing in on your "free" muffler as you spent on it to begin with.

If you Google "Lifetime Warranty Scam" you do get a lot of interesting hits.  And a lot of companies are offering these on everything from tools to cars.  One local car dealer offers "free lifetime warranty" and "free lifetime oil changes" - the latter being a $1999 line item added to the price of the car.  The odd thing, of course, is that oftentimes the dealers offer these things on leased cars.   "Lifetime" in this case, means 24 to 36 months.

And of course, the ultimate problem with any warranty, particularly overpriced 3rd party warranties, is that the company goes out of business and your warranty is worthless.

"Free Lifetime" this or that simply isn't free, it is factored into the purchase price, or simply isn't possible to collect on.   And it won't last a lifetime, either, but only as long as the product is functional in many cases, which for typical electronic toys is on the order of 5-10 years, max.   And even if you beat the electronic grim reaper, there is probably some other "out" that the manufacturer has to get out from under the onerous chore of providing support for a product whose user base can be counted on one hand.
"Lifetime" is probably another one of those words like "Free" - it simply Isn't.   And when you see it mentioned, like the term "Peace of Mind", keep one hand on your wallet, as someone is about to rob you.
UPDATE:  We have since sold the truck, and right before we sold it, the Magellan died.  So the "lifetime updates" lasted about seven years or so - the lifetime of the apparatus.   How convenient for them.   Even more convenient for Ford, they want $250 for an "update" to the database for our built-in navigation system.   Of course, now that everyone is using their phone for navigation, why bother?
Newer Post Older Post Home