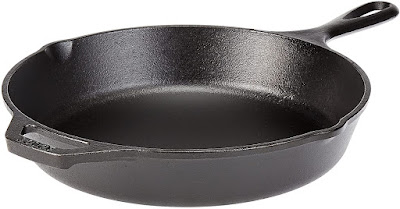 Sometimes the old-timey cheap stuff is the best.

I wrote before about pots and pans.  When Mark was working at Williams-Sonoma, he came home with some "Calphlon" pans which were basically consumer-grade versions of the aluminum restaurant pans that they used to use.  They worked OK, but everything stuck to them, so I never saw the point to them.  They certainly looked cool hanging from the $500 pot rack in the kitchen, though!   I think now that perhaps that was the point - they were featured on all those home shows.  It was a status thing.

Years later, we bought a set of Tfal pans at the wholesale club to use in the camper and the condo.  They were cheap, durable, nothing stuck to them, and they worked well.  They didn't last more than a few years - particularly the frying pan - as the teflon would wear off and, being aluminum, they would warp over time, like Calphlon did.   But for the price of one Calphlon pan, you could buy a whole set of Tfal pans.

In response to that posting, a reader wrote to remind me of the virtues of cast iron. And recently, it seems cast iron is achieving cult status amongst the younger set - there are websites, blogsites, and discussion groups devoted to cast iron cookery.

It's not like we didn't already own cast-iron cookery.  But we used it only for certain things, such as making Maine "egg pancake" or roasting wild Georgia shrimps over a bed of rock salt.  The idea of cast-iron for everyday use was beyond us.

Maybe that was because of the mysteries surrounding cast iron and the cult-like following it had.  I had a bad experience in college when I washed my roommate's cast-iron frying pan.  "My grandmother brought that from the old country!" he shouted.  "It took a century for it to be seasoned like this!  It will never be the same!"

Of course, he was wrong.  And "seasoning" is one of those great mysteries of cast-iron cookery that is really no mystery at all.  Over time - a very short period of time - the oil and grease absorb into the surface of the iron and make a no-stick surface.  Just oil it and heat it up again and wipe it clean and you're back in business.  Sadly, a lot of people want to make a big deal about this in discussion groups, which probably serves to chase off more people from cast iron than it attracts.  And maybe that is the point - after all, you can't have plebes and newbies using the almighty cast-iron cookery, right?  Close the door behind you!  Only hipsters allowed in!

But it is cheap.  Walmart carries a whole line of Lodge cast iron - in the camping section, not the home section, for some reason.  Cast iron is only for camping - that is the message they are sending, I guess.

On this trip, though, we have embraced the cast iron fry pan fully.  Our Tfal pan finally bit the dust.  It  was warped (aluminum, again) and the teflon coating was starting to wear off (in your food - nice!).  So we dusted off the cast-iron "spider" (frying pan) we carried with us, put a little olive oil on it, heated it up and wiped it out and have been using it for a month now.  We've forgotten how simple and easy it is to use a cast-iron pan and how inexpensive they are as well.  Some times the old things are the best.

It is just sad that for 30 years or so, we chased the false gods of Calphlon and Teflon.

The cast iron frying pan has other uses as well.  It makes an ideal murder weapon, as Cicely Tyson illustrated (as "Sipsey") in Fried Green Tomatoes. 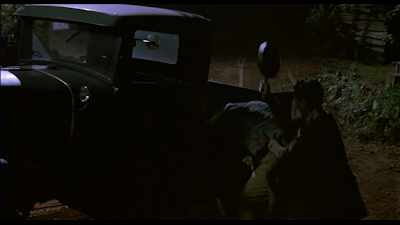 It's not just for frying green tomatoes!  You can kill Klansmen with it!