The Eagle and the Osprey 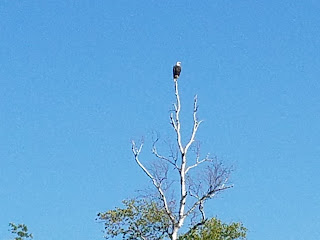 An Eagle on lake Winnie, looking for a meal to steal.  Truly the symbol of America!

On a boat tour on Lake Kabetogama, the guide was gushing every time we saw an American Bald  Eagle.  "The noble symbol of our nation!" she said, nearly saluting every Eagle we saw.  I had to suppress a laugh.

A few years ago, we went kayaking in Maine with Mark's brother.  It was fun, and as we were pulling our kayaks out of the water, we were treated to an aerial dogfight that went on for at least a half-hour.  Seems an Osprey had caught a fish.  That itself was amusing enough, watching the Osprey adjust his talons on the fish's back so that the fish was in the direction of travel.  A perpendicular fish presented a lot of aerodynamic drag!

I was musing that Mr. Fish was probably enjoying the view.  "Look at me!  I'm flying! Wheee! Look at all the people down below!  Oh, wait, this isn't good is it?"  Poor Mr. Fish.

But we were not the only ones to take notice.  A Bald Eagle - the great and noble symbol of America - decided that this was an easy free lunch.  What transpired next was a dogfight right out of World War I.  The Eagle had the wingspread and the power and could climb up high and dive down at a high speed on the Osprey, trying to get him to drop his fish.

But the Osprey was more nimble and could turn inside of the Eagle.  The Eagle overshot and would stall in flight, having turned too quickly.  Even with his fish "drop tank" the Osprey could outmaneuver the Eagle.   But could he keep this up forever?  Eventually, they would both become exhausted and maybe the Osprey - with babies to feed - would drop the fish and move on with life.

Neither side wanted to give up.  They went at it again and again, climbing, diving, wheeling, turning.  A half-hour at least, until both were worn down and eventually the Eagle gave up and flew away, humiliated by a mere Osprey!

I later learned, from researching online and from talking to others, that this is not abnormal behavior by Eagles.  They are birds of prey and opportunists - doing anything to get an advantage or just stay alive.  They will hunt, or steal food from even other Eagles, and of course, Ospreys, who they view with disdain (my take, anyway).  They will even eat roadkill, just like a vulture.

And it struck me, what a great symbol for our country!  No wonder Benjamin Franklin suggested (perhaps in jest) that the wild turkey be our nation's symbol.  The Eagle is a jerk.

As a national symbol, it is somewhat odd.  Bald Eagles are rapors - birds of prey that eat other animals.  Yet on our national seal is a Bald Eagle, "spread eagled" and clutching 13 arrows in one claw, and an olive branch in the other.  Yet, in real life, a Bald Eagle is not likely to be offering an olive branch to anyone.  In fact, he will sit his lazy fat ass on a perch for hours, waiting for some other chump to catch something, and then intimidate them into giving it up.

An Osprey catches a fish, and is about to eat it, when an Eagle lands nearby.

Eagle: Hey there, what's ya got?

Eagle:  Nice fish, be a shame if something happened to it, if you know what I mean!

Osprey: No, I don't know what you mean.

Eagle:  Well, the forest is a dangerous place.  Things can happen.  Birds can get hurt.  But I can help you out.

Eagle:  Protection.  For every five fish you catch, you give me one.  I look out for you and make sure no one tries to steal your fish.

Osprey:  But isn't that what you're doing?

Eagle:  Look, you catch five fish - that's a lot.  More than enough to feed yourself and your family.  What's one lousy fish in return for security?  Which would you rather do, catch one extra fish for me, and be secure, or have to fight off every Eagle and Raptor in the forest? It's an offer you can't refuse.

Osprey:  And if I refuse?

Eagle:  I know where your nest is.  Nice eggs ya go there.  Shame if something happened to them.  I know a raccoon who can climb trees.  That information is of value to him.

You get the idea - the Eagle is the mafioso of the bird world.  We think it is noble and kind, but it is self-serving like most of the animal kingdom is - and has to be, to survive.  Stealing food is just a way of getting along.  So they do it.

And by doing so, makes them the perfect symbol of our Capitalist country.   Say, nice banana republic you got there.  Shame if something happened to it.....I can help you out...