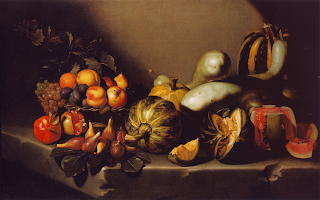 It's food - not a decoration!

After 35 years living together, some things have changed, and others haven't.  You learn to live with life's little annoyances, particularly when you realize you cause so many more for your partner.

I have learned, for example, to assume that the cap on anything is not tightened down, even the toothpaste (which for some reason, is left open sometimes).  I have tried to take a stand on this, particularly after one incident where I grabbed a bottle of mouthwash, the loose cap flew off and I was drenched in Lavoris from head to toe.  But like battles between husbands and wives over leaving the seat up, it is a war that is never won, at best you can negotiate a cease-fire.

But the decorative fruit thing is one hill I am willing to die on.  My Mother was into this as well, and I fought her and won.  She would buy fresh fruit and arrange it in a bowl in the kitchen and act like it would last forever, when in reality, fruit at room temperature has a lifespan of days.  And with two teenage boys around, it rarely lasted that long.

"Don't eat that!" she'd say, "that's for decoration!  I like the look of a bowl of fruit!"  I tried to explain to her that the fruit would just end up rotting away in a day or two - you might as well eat it.  Why waste food?  I guess she thought the kitchen should look like a Renaissance still life painting or something.

My grandmother had the right idea.  In her apartment in Redbank, she had a bowl of plastic fruit. It was very realistic-look and the grapes in particular were soft and you could squeeze them, which I did, which resulted in being yelled at again.   But at least her plastic fruit lasted years and years, not merely days, and wasn't a waste of food and thus money.

So imagine my frustration when I found Mark doing the same thing.  He would buy fruit, arrange it in a wooden bowl, and when I took a bite out of an apple, he would say, "I was saving that!"   I would reply, "for what?" and he'd say, "for later!"

But late never came and the only time I was "allowed" to eat the bananas was when they got soft and nasty or when the apple had a brown spot on it.  Not only that, rotting fruit bowls attract tiny little fruit-flies.  It is disgusting.

You want display fruit?  Get plastic.  But then again, ask yourself why you are taking up valuable counter space with a bowl of fruit, which really should be in the refrigerator (except the bananas) if you want them to last more than a day or two.

Thirty-five years and we still have this dispute.  Not really an argument, but a low-level passive-aggressive battle. He buys the fruit, says he is saving it for "special" but cannot elaborate on a particular event this fruit is saved for (a pie, a dessert, or whatever).  So I eat it.  While it's fresh, while it's tasty, and while it's still good.

The problem with fruit is that you don't know how long it has been sitting on the shelf in the grocery store.  We bought some plums a while ago and they were firm and tart - the way I like them.  So we bought more and they were kind of soft, watery, and sickly-sweet.  Pass.   Same grocery store, same packaging, same source, but just a week too late in the season, I guess.

Fresh fruit, like fresh vegetables is a use-it-or-lose-it kind of proposition.  Yes, some things stay fresh a long time in the fridge, but eventually there is an end game to all fresh produce.

Would you arrange a tasteful display of different kinds of steaks on a plate and leave it on your kitchen counter for a week?  Of course not.   Why do it with fruit?  Same deal, different foodstuff.