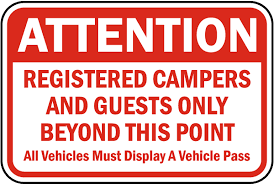 If you feel like cruising through a campground to see what's going on, just don't.

I was reading online reviews of a campground in Provincetown (for next year?) and there were a number of one-star reviews from people who never even camped there.  One said they "accidentally" drove through the campground as there were "no signs" (there is a huge one, out front, and a guard shack as well!).  Another claimed they were "just checking it out" for future reference.  They were upset that the management asked them to leave and weren't very nice about it.  Funny thing, that!

Now granted, I have been to that campground back when it was family-owned and run and they only accepted cash (hello IRS?) and yea, the people running it were a bit antsy.  But it is under new management now and they accept credit cards.  They still don't appreciate people driving through the campground out of curiosity.  Like anyone else in the hospitality business, they don't appreciate people who make life difficult for the other guests or for management.   Again, what a funny thing, eh?

We see these sort of people, all the time in all sorts of campgrounds and frankly, it is creepy as fuck.  People drive through the campground, slowing down at each site to "check it out" as to who is camping where and in what kind of rig.  It is annoying as all get out, particularly when people do it late at night.  At one municipal park we stayed at on the Mississippi (in Missouri) it seemed that every citizen in town had to cruise through the campground, in cars, trucks, ATVs and golf carts (allowed on the road in that town).  One fellow drove through the place several times, apparently to show off his new straight-pipe exhaust system.  We were going to stay for three days - we left the next day.

Why is this creepy? Well, it is on a number of levels. Imagine you live in a suburban or rural neighborhood and people went "cruising" down your street at all hours of the day and night and even drove up your driveway "just to see what's going on."  You'd be pissed.  You're trying to get to sleep in what you thought was a peaceful suburban or rural environment and some idiot's headlights are blaring into your bedroom or the same said jerk is doing a zero-radius turn on your freshly paved driveway.

It is the same thing, camping. You go out to the wilderness to experience wilderness, or at least something other than urban living.  An endless stream of curiosity-seekers wasn't on your menu.  And what's more, we aren't creatures in a zoo to be gawked and stared at - anymore than anyone else is.  Some days, I am tempted to follow these idiots into town, park in front of their house and just sit there for an hour, staring at their front door.  No doubt, they would call the Police and rightfully so.

Nearly every single campground in the nation has a sign up front saying, "registered campers only" which translated into plain English (in case you didn't get it) means, gethefuckouttahere!

Now of course, you may argue that you might want to stay at said same campground and want to see what it's like.  And in most cases, you can visit a campground and ask for a tour or ask if you can just look around.  Most campground owners, hosts, or rangers, will accommodate this.  But that is the exception to the rule.  99% of these creepy campground cruisers are not potential customers but rather people from area just "checking things out."

Which brings us to this: One reason some of these folks are "checking things out" is that they are looking for stuff to steal.  Sometimes they steal entire RVs, particularly trailers.  They grind off the serial numbers and register it as a "homebuilt" trailer (popular in Georgia) or use it as a hunting camp and never bother to register it.   But thieves also look for loose gear, boats, outboard motors, bicycles and anything else not nailed down.  Crimes of opportunity.

It doesn't happen often.  Many RVers are also gun owners and if you go nosing around someone's campsite or trying to open doors or compartments, you might end up getting shot.

Like I said, it is pretty rare. But creepy people cruising the campground tend to make the campers feel less secure and vulnerable. We were at a county park in Kansas once and it was in the middle of nowhere.  It seemed like a nice place to stay for the night, but then the local teens started "cruising" the place, playing music loudly, throwing beer cans (and bottles) around and generally making a nuisance of themselves.  Maybe they were harmless kids just having fun.  Maybe not.  We didn't stick around to find out - we left.

Now granted, if you live on a public street, particularly in a city, you get traffic all the time.  People drive by on their way from Point A to Point B.  But if you are suburban Mom at home during the day, and you saw some guy slowly cruising down the street, slowing at each house and examining them in detail, you would likely get creeped out, if not in fact call the cops (or post something alarming on Facebook).  I wouldn't blame you - it is odd behavior in my book.  So why would people do this at campgrounds?

Mark's Dad used to do this, and maybe 50 years ago, people didn't see it as creepy.  He would drive the family station wagon (Rambler) through the local campground to "see what's going on!"  Oddly enough, they were RVers - at least renting RVs on several occasions.  I guess he didn't see the connection between his behavior and that of others creepy-cruising when he was camped out.

It seems like a harmless enough thing to do, but it is weird and unsettling, so just don't do it, OK?  Respect the privacy of the campers - they have so little as it is.  They are not an exhibit at a museum or a zoo.  They are not a freak show for your enjoyment.

Just say NO to cruising the campground!   That is, unless you are camping there.  And even then....