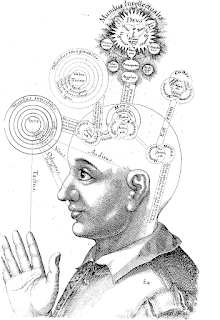 Is our consciousness a continual thing, or do we exist as discrete beings at discrete times?

I look back on my life and think about the different people I was at different times of my life.  I say different people as they appear to me to be other people.  Yes, I have memories of things that happened at various times of my life (and like anyone who has a soul, remember all the cringe-worthy events more than the happy times).  But how I thought and what was going through my head, I have no memory of, so to speak, or at least it is not a very strong memory.  I sort of have to piece together my motivations and thought processes based on my historical actions.  It is like a reconstruction, not an actual memory.

I owe a lot to 30-year-old me who went to law school and within a decade stared his own law practice and invested in Real Estate.   I also owe a lot to Mr. See for prodding me in some right directions.  But as I noted in an earlier posting, we often at the time see "Uncle Tomorrow" as a different person than ourselves, and "Nephew Yesterday" seems, to me, to be an utter stranger.   At least he looked out for his dear Uncle.

It got me to thinking - always a dangerous pastime - about whether we were, in fact, the same person.  I noted before that our brains are highly complex neural networks that are constantly reprogramming themselves based on learned experiences.  So yes, from a strictly technical point of view, no human being is the same person, over time, as new experiences change the weighting on the nodes of the human brain, creating a new and somewhat different human brain.

We see this a lot with head injury victims.  Major damage occurs to the brain and the person's personality is changed.  It is sort of the theory behind the lobotomy.  A friend of mine, for example, nearly had an aneurysm in his brain - he had a giant bloated blood vessel that was ready to burst.  They operated on his brain and saved his life.  The same thing killed his Father many years earlier.  What was interesting is that his friends told us that he was a changed person after the operation.  "He wouldn't have liked you before," they told me.  Apparently he was a huge bigot and homophobe before the operation, but afterwords was very mild and acted somewhat confused sometimes.

But it needn't be a brain injury.  A brain injury certainly re-arranges the neural network, but the network can also be altered by experiences.  People talk about friends coming back from the war or some other traumatic PTSD experience and say, "He was a changed man - like a different person!" and in a sense, I think that might be true.  The experiences were so dramatic and extreme that they reset many nodes at once in the brain with new weighting values - creating a new brain in the process.  It could takes years to un-learn that.  Decades, in fact.

But on a more mundane level, I think the same is true for everyone, just not as dramatic.  And the older you get, the further you move away from the neural network that was your brain at age 18.  The experiences of the decades pile on, and they become the new norm, and what you thought or said in high school becomes a dusty memory - if you can remember it at all.  Of course, as I noted before, some folks never leave high school, but spend a lifetime obsessing about their childhood.  They live in the same small town, see the same people, and plan the 30th reunion.  In a way, they are constantly reinforcing the learning of that one era in their lives, and thus do not move on.  And maybe that isn't such a bad thing, either.  Others, move on.

I recounted before that my Dad, before he died, confessed that his brain was starting to unwind.  He said he started having memories from his youth - like motion pictures in his head, down to the last detail.  Perhaps these were old memories tied up somewhere in the brain and as the brain started to shut down, these neurons shot their load - "Hey, this is going in the dumpster - you want to see it one last time?"  Maybe that's what was going on.  Maybe his neural network was regressing - into a second childhood, as they often call it, as oldsters regress further and further until they are babbling and shitting themselves in a diaper like a 150lb baby.

I look back at certain periods - decades, let's say - of my life and they each seem like different people to me.  The first decade is pretty simple, once you get that potty-training thing under your belt and learn how to read.  Life is easy and you can say "Let's be friends!" and you have a new friend.

But then puberty comes along and the teenage years are the worst in my opinion.  A body raging out of control on hormones for starters.  But the worst part is moving on from being a student and a child to a worker and an adult.   I managed that last part OK, but so many others fail at it - it is the age when mental illnesses manifest themselves.

I don't remember much about my early 20's, other than like most young men, I lusted after material goods, much to my detriment.  At about age 25, they say, the brain starts to take a set - it finishes its growth and maturity sets in.  That's the age I gave up drinking and drugs, finished my Engineering degree and started law school.

Within a decade, I had my own law practice and several investment properties.  It was quite a lot of heavy lifting and for the life of me, I don't know who that guy is.   I mean, I'm glad he did all that work, but today, I can't really recall that person - it seems like another person's life, not me.  Have I changed that much in the interim, or is something else going on?

What is sort of scary to me is that I feel the same sort of thing coming on - the years going by and the brain getting a little rustier.  I am glad I retired when I did - I wouldn't want to be one of those old attorneys doddering around, a malpractice suit waiting to happen.  We have a lawyer like that down the street from us.  He is helping the homeless with their legal problems pro bono, but the paying clients wanting their wills rewritten are finding he isn't returning their calls.  And yes, he is the one who messed up the deed to our house - putting down the wrong lot number.   There reaches a point where you need to pack it in - before your name is printed in the State Lawyer Reporter as a disciplinary case.

So I packed it in.  Patent Law is a tricky business - it requires you know the technology and the law, and both are changing constantly and your education becomes obsolete rather quickly.  Once I stopped practicing it was like dropping a heavy stone and watching it sink into the lake.  It was gone forever, but in a way, I wasn't sad to see it go - it was also quite a burden.  Today, I could not go back to my old job because so much has changed in the practice in the last five years.   I am functionally unemployable.

The me of today is a different person than the me of 20 years ago, 30 years ago, and certainly 40 years ago.  I am much more relaxed than before, and that is in part because I am financially secure (or so I like to think) and also have no time-crunch agenda.  Things get done when they get done.  I am not in a hurry to complete any task, not in a hurry to drive anywhere, not in a hurry to run out the clock.  The me of 30 years ago was a much more wound-up individual.  I used to get speeding tickets like mad, as I was in a rush all the time and thought that doing 5-10 mph over the limit was "normal" and who is this old fuck ahead of me doing the speed limit?

Like I said, I think this is a normal process for most human beings.  And it may explain why some folks stay in their hometowns, marry their childhood sweetheart, and go bowling every Thursday with the same friends they had in high school.   They don't want to change their brain - they want everything to stay the same.  These are the folks who tend to vote "conservative" and see the world as spinning out of control due to change.

And I guess that is comforting, because change in your life can be confusing and cause disassociation.  Perhaps this is not something that many people are comfortable with.

So I think this is a normal stage in life I am going through.  Well, that or incipient dementia...