Why FIRE is stupid! 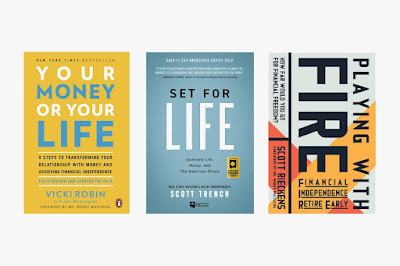 Fads are not a way to invest or manage your money.

A reader writes asking why I made snarky comments about the "FIRE" movement.  And in a nutshell, it answers the question itself - it is a movement, not a rational way of financial planning.  It is akin to these real estate schemes - and they are schemes - such as "BRRR."

And again, some would say, "Well Bob, didn't you Buy, Rehab, Rent and Re-fiance your properties? And the answer is, well, yes of course, but with two caveats.  Important caveats.   First, I refinanced the properties not to take out cash to spend (and call it "income" as those scam artists do!) but to take advantage of lower rates and if I took out cash it was to buy another property.  Second, I did this on my own, without paying some online yahoo for a "BRRR investment kit! Everything you need to know to make money in Real Estate!"

You want to make real money in real estate?  Sell investment kits.  No risk, no worries, no effort.  But that market is saturated, quite frankly.

FIRE falls along similar lines.  Yes, I became financially independent and retired early.  But no, I didn't buy a "FIRE kit" or a FIRE book, or attend a FIRE seminar, or waste all my life online on FIRE discussion groups.

The problem I have with things like FIRE is they take a good thing, slap a trendy name on it, and then take it too far.   You can't sell a financial independence and early retirement plan to a 20-something if you tell them to save 10-15% of their money in a 401(k) or IRA and that, if they work for 30-40 years, they may be able to retire "early" in their 50's.  That just doesn't sound so appealing.

So instead, they say, "Save 70% of your $100,000 salary and retire by age 40 - maybe age 30!" and they promise this on the basis that you can live on an absurdly small amount of money.  One "Financial Kung-Fu" advocate claimed you could live on $7000 a year in retirement.  Well, I am retired and it is damn hard to live on $36,000 a year, what with inflation and all.  Living on less than 1/4 that amount?  Even the homeless have an income greater than that!

What is worse is that these schemes and kits and books set people up to fail.  The schmuck who spends $49.95 or whatever to sign up for this sort of nonsense, can't make it work, because like an MLM scheme, it wasn't designed to work.   The victim then believes (and the key word is "believes") that they somehow failed because they weren't good enough at flipping houses or cars or BRRRing or FIREing or MLMing or whatever, and they slide furhter into depression - which is what sent them to these hucksters in the first place.

I noted before that belief s evil, and that is how these hucksters work.  They get people to believe in something, rather than use logic.  Once they are bought into the idea, they will hand over their money.  It is how cults and churches work (I am being redundant) and how MLM schemes and Nigerian scams work.

If you go on these sort of discussion groups, you see it all the time - people raving and ranting about how great it is to believe in these things - and this includes "crypto" and "stonks" as well. They feel part of a community and exclude contrary opinions that don't mesh with the group-think.  Like I said, it's a cult.  Our political parties are the same way, particularly one of them.

Are all these books, such as the ones shown above, scams?  Perhaps not.  Perhaps some of them teach prudent savings, cutting back on unnecessary expenses, and teach how to retire early on a smaller but reasonable income.  I have no truck with that, but when you attach a trendy name to what was, in earlier years, just ordinary thinking, it becomes wrong.

I noted before how a friend of my Dad's went to Saudi Arabia back in the 1950's as a petroleum engineer for ARAMCO and made quite a bit of money (and had no place to spend it, as he lived in company housing with his family).  So he banked it - almost all of it.  And when he came back to the States, years later, he was able to "retire" in his late 40's.   He did all that without having to buy a book on "how-to" or attend a seminar or spend countless hours in a discussion group replying to bot, shill, and troll postings.

(I have a young friend who is doing the same thing, with different results.  He flies to war-torn areas of the world (mostly in Africa) to work on oil rigs.  He gets paid a hefty six-figure salary (plus expenses) to do this.  He is saving none of it.   Unlike my Dad's friend, he is assuming that he can do this work, indefinitely, and always have this big income.  It ain't so - they chuck you out before age 50.)

You don't need a "system" when the "system" can be summed up in two words:  Common Sense.

That's it, in a nutshell.   You can blow all your dough on a new leased Acura, or you can invest.  Every car you buy or lease is another year (or two) you have to work before you can retire.  It is pretty simple when you look at it that way.

And you don't have to spend a penny to realize this!