All the Kids are Streamin' These Days.... 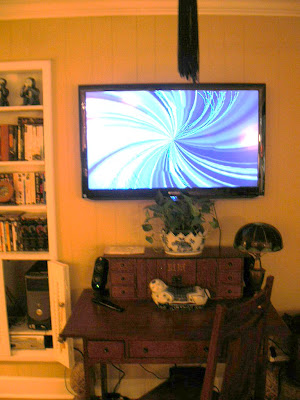 An old computer and a cheap flat-screen TV, and you can stream video for less than 1/10th the cost of Cable TV!

I don't consider myself particularly high-tech.  I don't own a smart phone or a hybrid car.  I don't "vape" (or smoke for that matter).   I tend to flog equipment until the manufacturer no longer makes parts for it.  I am pretty square, middle-class, and middle-aged.

But one thing I have embraced is cutting the cable to Cable TV and streaming video online instead.  We have been doing this for the better part of a decade now, and it basically rocks for three reasons:

1.  It costs little or nothing.

2.  There are no advertisements.

3.   You get to decide what to watch, rather than "what's on" at any given time.

I built my first cheap media computer a few years ago in New York.  I have one in Georgia now, just an old laptop and a cheap 42" television from the wholesale club.   Plug in some old computer speakers with a subwoofer, and Wa-La (as we say in Georgia), you've got a Netflix streaming machine!

Or YouTube, or the Daily Show, or The Simpsons, or South Park or whatever.   For some reason, most media companies post their shows online, and thanks to AdBlock Plus, you can watch them without commercial interruption.

At least for the time being.  It is still the wild West in the streaming world, and things will change - and not for the better - shortly.  Our corporate overlords will not give away content for free forever, nor let us plebes escape being pummeled with ads for new SUVs or sports drinks ("it's got electrolytes!").

But streaming video is the wave of the future, and it is scaring the crap out of the Broadcasting industry.

You see, Broadcasting was an invention, and it was largely invented by one man, David Sarnoff.   When radio first came out, they called it "wireless" as in short for "wireless telegraph".   Instead of running wires from town to town, you could send dots and dashes over the air.

And while you could not tap into Western Union's lines, an individual could buy a radio set and listen in to the Morse code from "All the Ships at Sea" and even tap out a few notes of your own.   A man named Edward Howard Armstrong figured out how to send voice over the air, and people were shocked when they tuned in to listen to dots and dashes and heard music instead.

But it took Sarnoff to see that this newfangled Radio thing could be much more than a point-to-point wireless telephone or telegraph.   He came up with the idea of Broad-casting - having one huge powerful transmitter, sending radio signals to thousands, nay millions of "listeners" who could not broadcast back.  The idea of the radio "receiver" was born.

And radio, as I noted before, begat the great dictators of the 1930's.  And television didn't fare much better.   With radio and television, loud voices (backed by big money) can broad-cast to the masses who  can't talk back.

The Internet changed this, of course.  Now we can talk back - at least for a time, until they silence us again.   We have a brief heady period of freedom, before it all turns into Twitter and Facebook and canned responses to broad-casted messages.

But getting back to streaming.   With cable television or over-the-air television, you have to sit down and decide "what is on" and what you want to watch.   Yes, the DVR was a big advance, allowing you to record shows and play them back later (fast-forwarding through the ads).   But it still relied on you choosing a show to watch at a certain time - or after it was "aired" and on your DVR.

The idea of just saying, "Gosh, I want to watch THIS and watch it NOW" had not yet materialized.  That is, until now.

With streaming video on the Internet, you can decide what will be on, and when.   Yes, today, it is still at a primitive stage - like the people in the 1920's with battery-powered sets, listening to dots and dashes through earphones.   We have somewhat limited choices.  Resolution is somewhat crude (unless you are willing to pay a lot).   And while it is free or very cheap right now, prices are starting to edge up.   And a lot of leaders in the business (such as Netflix) could end up on the trash dump of history (first to market is often last in the marketplace!).

People fail to appreciate what an invention Broad-casting was - and is - but its era may be rapidly drawing to a close.

Radio is dying, as young people stream music through their smart phones.   They can either select music, or have an algorithm select music for them (such as Pandora).   No longer are we all listening to the same "station" or channel anymore.
In 10 years, broadcasting as we know it may be dead.   Instead of seeing "what's on" you will decide what to watch, and when you want to watch it.   You don't have to make an appointment with your television anymore.

What is interesting to me is that a lot of young folks are catching on to this - but many more are still watching cable TV like their grandparents did.  They may stream this or that on their smart phone, but when it comes to television, they are decidedly "old school" and suckle on the almighty cable nightly.

There may be some reasons for this.   Sports and current events are hard to stream online right now.  If you want to watch the ball drop on New Year's eve, you have to tune to network television (you aren't missing anything, of course, by not seeing this).  But many die-hard fans want to watch their sports teams, and at least for the time being, streaming sports videos is not widely done (that I am aware of).

And it will be interesting to see how this affects streaming and the cash-flow of this lucrative business.   Teams may be able to stream their games directly to fans, for a fee, or through a paid advertisement media.   It could spell a breakup for the stranglehold the networks currently have on sports.

But long-term, I think we'll see broad-casting wither away and streaming come on stronger and stronger.   What is funny to me, is that it seems like 2015 is the first year a lot of people are just starting to figure this out.