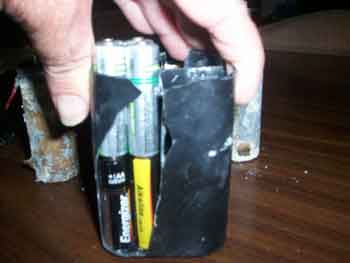 Everyone wants a shortcut to success or a "secret" to easy living.  There aren't any.  If you want to know where all you money is going, look in the mirror.


Some folks read my blog and expect to find hints on how to recycle pocket lint, to save money.  They like postings like "how to fix your garage door opener" and stuff like that.   But they dislike - intensely - any posting which says, "Stop feeling the victim, take control of your own life, and stop blaming others for your circumstances!"

Even if you are a "victim of circumstance" (saddled with medical bills, for example) you may not be as much of a victim as you think you are.  A lot of the pile of shit you got into in life is largely a result of your own actions (or inactions) and not that of others.

But first, let me take a moment to let you know how much I despise the term "hack".   Hacking computers is a time-worn tradition, to be sure.  We did it back in the 1970's with primitive dial-up systems (and yes, back then, administrators set their password to "password").  But the term has become over used and overwrought.

And folks are making fun of it as well - and luring people into hunting snipes as a result.  For example, the old gag of "did you know that inside a 6 volt lantern battery is like 100 AA batteries wired together?"  Well, no, there isn't.  But it illustrates how people can be really gullible.

But life hacks - do they really exist?   Well, for the most part, no.  Sure, you can use a dustpan to fill a bucket of water from your sink.  Oh, wait, you don't have that kind of dustpan with an open handle.  Whoops!  Life hacks don't always work - if they ever do!

And yea, a rubber band across a paint can could, I suppose, be handy for cleaning a paintbrush of excess paint.  Or maybe just a pain-in-the-ass when you are trying to paint.   Some of these sort of things fall under the "Hints from Heloise" kinds of deals - neat ideas that sound really cool, but you forget about them ten minutes later, so why bother?

And you know, every time I have tried to get a key on (or off) a keyring, a staple remover just wasn't handy.  Hell, in 10 years, staple removers won't exist, along with staplers and paper.

We all want life hacks to exist.  We all want to believe in the "one trick to the tiny belly" or the "one tip to making money in the stock market!"

There has to be a tip or a trick or an in-the-know clue that gets you to the head of the line at Space Mountain at Disney, or the buffet on the cruise ship.  Right?  Because that is what life is all about - getting that insider knowledge to beating the system!

Those chumps who choose to consume less and save more - hell, they're just beating their head against the wall, right?

And I guess that is why I don't think "life hacks" exist, in reality.  Sure, there is some obscure tip to opening a stuck jar lid that may come in handy some day.   Chances are, you won't remember it as you struggle with those pickles.

But on a larger scale, I think the concept of "life hacks" is a dangerous one - the idea that there are shortcuts to life, and that if you only had the "insider information" you would come out ahead.

In fact, it is this myth that marketers use to sell us crap.

For example, I mentioned cruise ships.  I have friends who love to go on cruises - dozens of them over their lifespan.   And they regale me with the "secret insider tips and knowledge" that allow them to score an extra half-a-shot of liquor in their sugary-sweet blender drink at the Tiki Bar, or to get three places ahead in line at the all-you-can-eat buffet.

Is that what going on a cruise is all about?  Living in a cattle car and then congratulating yourself on getting three additional grains of feed as a "gold member"?

Or is that just falling for the trap they have laid?  And it is a trap - not too much different than "freemium" gaming.

The credit card companies are in on this gig as well.  I don't know how many people e-mail me telling me I am full of shit for not latching onto "reward bonus miles points rebates" on a 20% interest rate credit card (with a penalty rate of 30%!).   To them, I am "missing the point" as the "name of the game" is to score a 2% rebate on every purchase and come out ahead!

Name of the game - an interesting phrase.  As it is gaming - and game theory - at play here (or at work).   They distract you with their little giveaways, while entrapping you in a high interest rate card that someday - someday soon - will entrap you in a mire of credit card debt, much as mastodons were entrapped in the tar pits at La Brea.

Similarly, the gold bugs and stock pickers tell me I am missing the point.  There is a "life hack" to beating the stock market - secret insider information that people "in the know" (just a few hundred million of us) can use to beat the odds!   Buying and holding?  That's for idiots!  Day-trading is the secret to success!

Sadly, this "life hacker" mentality pervades our society today, and it is just an extension of an older con game that has been played through the centuries.  The name of the con?  The idea you can get something for nothing and that there are shortcuts to success and that hard work and saving is for chumps.

"Life Hacks" are just an extension of this age-old con.   Don't fall for it.   Life cannot be hacked.