How Democrats Exploit the Poor 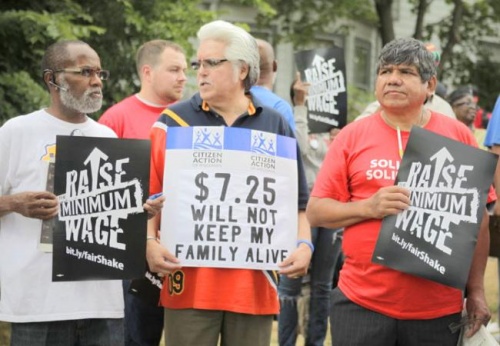 The GOP promises to preserve "moral values".  The Democrats promise you "more money".  Either way, you are being manipulated.

"And sadly, I can guarantee you that the folks profiled in this story likely voted Republican, because of "family values" or religious values issues or because "Obama is a Muslim" or whatnot.   It is a perfect little con, if you think about it - you get your own victims to vote for the government that exploits them.  And until these folks wise up, well, should we really feel sorry for them?   I wonder sometimes, particularly when it is folks like this, living in trailer parks, who would be the first to stuff me in the oven, if they had the chance."

And that is largely true.   The GOP uses "social issues" to get very poor white people to vote Republican, even though their main party planks (cutting taxes for the rich) really don't help the poor very much.

And yes, I have had poor rednecks tell me that "thanks to Bush" their taxes were lowered, or that they won't have to pay a "death tax" in order to leave their trailer to their kids.   When you try to point out that their marginal rates stayed the same, or that there is a $5 Million exemption to the Gifts and Estates tax, their eyes glaze over.   They have no idea what a marginal rate is, and they don't understand the Gifts and Estates tax, either.  All they know is Obama raised their taxes!

Which of course, is not true.  Actually, under Obama, our Social Security taxes were temporarily lowered, which in retrospect, was probably not a very good idea, with so many people reaching retirement age all at once.

So the GOP uses these social issues - abortion, the war on Christmas, gay marriage, Obama is a Muslim, terrorists are going to attack your trailer park, etc.-  to get people at the very bottom of the totem pole to vote for politicians who help those at the top.

Do Democrats do the same thing?  You bet.  Everyone exploits the poor!  It is a fun game!  Join in!

The poor the Democrats exploit, of course, is a different demographic.   The GOP goes after the white rural poor, and plays them against more ethnic urban poor, in a classic game of divide and conquer.   The Democrats go after the more ethnic urban poor, and often use racism as bait to get them to vote Democratic.   The implied promise is, of course, that if you vote Democratic, all of the disadvantages you have in life, based on race, will be eliminated.   And this promise has been made, in one form or another since the mid-1960's, when the Democratic party switched from the party of the Klan and Southern racism, to the party of Northern liberalism (and the GOP went from the Northern party of freeing the slaves to the Southern party of racism).

The ways in which Democrats exploit the poor, however, are a little more subtle.   Under the rubric of "protecting the poor" they often take actions which in fact, make their lives more miserable.   During the riots of 1968, much of the retail district serving the inner city poor was destroyed in Washington, DC, leaving only a few very high-cost small businesses (convenience stores and the like) insuring that the very poor in the city would pay the highest costs for goods and services.

When Wal-Mart proposed putting stores in the DC area, many "Community Activists" and locally elected officials opposed the plan.   Their argument was that Wal-Mart didn't pay workers enough money, and that the low-wage jobs weren't enough to "support a family of four" on (which as we know, is guaranteed in the Constitution).   Of course, the fact that many of these locally elected officials were funded by the same small businessmen who were exploiting their constituents, was of no consequence.

The good news is, that was a long time ago, and Washington DC now has three Wal-Marts, so poor people can get the same low prices as rich folks in the suburbs.  This may sound like a trivial thing to the suburbanite who spends his paycheck at Whole Foods, but when you are poor, every nickel counts.

Similarly, the promise, or the implied promise that many Democrats make to the poor, is that if you vote for them, your share of government swag will go up.  More welfare, more food stamps, more Obamaphones, and whatnot.   Of course, the bulk of this swag does go to white folks in the rural trailer parks, but let's not let that get in the way of a good narrative.


And of course, as some would note, giving away "free" government money to people might help them in the short-term, but hurt them in the long-term.   When people start to expect to be supported by the government, the incentive to work hard and save diminishes.   And these types of wage subsidies end up being subsidies to low-wager payers.   Wal-Mart makes more from social welfare programs than the recipients do.

But one area where the Democrats have a clear lead is what I call the "Stuffin in the Oven" issue.   Yes, we are all well aware of how brutal human nature can be, as was exhibited many times during the last century, and indeed, in this one.   People, it seems, just love to kill other people simply because they believe in a different religion, are of a different race, or are from a different place.   And it goes without saying that folks love to kill people who have sexual practices different than their own.   Indeed, today, in many parts of the world, rape is condoned, but adultery is a crime punishable by death.  People are crazy.

Of the two parties (and in the United States, there are only two, so get over it) the Republicans come out way behind on this issue.   The GOP courts the votes of the intolerant, the bigoted, the racist, and the homophobic.   Go to any white supremacy rally and ask how they vote - nary a Democrat in the bunch.   Of course, the GOP claims that they are revolted by such opinions, but nevertheless they send the code words in the media that stoke such desires.    You don't need a secret decoder ring to understand that when the GOP talks about "Welfare queens" they are talking about black people.

So for me, it comes down to a simple choice.    Would I want to live in a Socialist nightmare where the government runs everything and we are all on the dole?   Or would I rather be lynched in some Libertarian nightmare where everyone has guns, there are no laws, and racism and bigotry are the order of the day?    Which would you choose?  Life or Death?

It is a pretty simple litmus test.   One side hates, the other does not.   Both manipulate their "base" demographic to get elected.   But as to which is more evil, well, that is not hard to figure out.  And so long as the GOP continues down this path of intolerance, well, they are not going to get my vote - and that of many others.