Why Do So Many Defend Criminals and Terrorists? 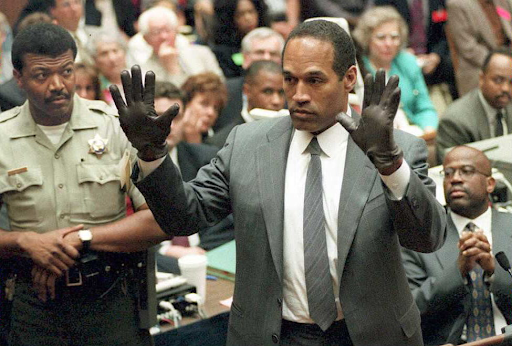 
A funny thing you see on the Internet and in real life is how so many people are quick to rush to judgement in favor of criminals and terrorists.  The picture above is from the O.J. trial.   When that nonsense was going on, I ran into a lot of otherwise rational people who spent hours watching the trial on "Court TV" or some other godforsaken cable channel.  After watching all of this, they said to me, "Well, you know, he could be innocent!"

Of course, since then, we've learned that OJ has a bit of an anger management problem and is in jail for other violent crimes.  The idea that a former football player could commit murder seems, well, a lot less far-fetched than it did back in the 1990's.

But it is funny, people tend to take the side of criminals these days - or terrorists - willing to give them the benefit of the doubt, while discounting mountains of evidence to the contrary.  According to some folks, everyone in jail is innocent and was just railroaded.   And of course, the Police are just bad guys - that goes without saying, right?  Wrong.

If a terrorist is jailed, and he raises allegations of abuse, a lot of folks are quick to believe him, without any corroborating evidence.  No one stops to think, "Gee, maybe as a terrorist, he has a vested interest in getting us to distrust our own Police!"

Why do people think like this?  I think there are a number of factors going on:

1.  People are afraid of the police because they feel guilty about something.   You speed on the way to work, and you run a stop sign.  You break the law every day.   And you get caught for this, of course, and the cop giving you the ticket is the "bad guy" - right?   So you tend to think the Police are evil and that anyone caught doing something bad is probably innocent, because you were caught doing something bad, and of course, you are not guilty of anything, right?

Right.   Wrong.   It takes maturity to see that when you speed, you are breaking the law, and if you get pulled over and are given a ticket, it is not the fault of the cop, but your own fault.   You have to man up to these things and assume responsibility for them.   Americans, even though they love to be macho and belligerent, are really like small children.  Nothing is their fault, right?

2.  People feel guilty about having so much.  One problem for a lot of Americans, particularly educated ones, is that they make a lot of money at jobs that really aren't all that important.   There is a disconnect between how much they earn and what they actually do.   And they really don't know anything - how their car works, or how the world works.   And they realize their standard of living, compared to the rest of the world, is obscene.  So they feel guilty about their apparent wealth and tend to root for the underdog.   Deep down inside, they think that maybe the Taliban is right and we Americans are a bunch of bad guys who need to be taken down a notch.   Some folks call this "Limousine Liberalism".

3.  People like to posit themselves as victims.   While we have it easy in America - easier than most everywhere else in the world.   So they feel guilty (see #2) about it.  So open way of dealing with this is to say that we live in a "Police State" and that we incarcerate too many people, or whatnot.

4.  We root for the underdog.   General Patton once said that Americans love a winner and will not tolerate a loser.   General Patton never met a Cubs fan.  We tend to root for the disadvantaged, the underdog.  The guy who makes it from the bottom to the top, in spite of adversity.   So when we hear about a criminal "wrongly convicted" we are more than willing to throw out all the evidence and testimony in court, in favor of some wild theories put forth by an attorney.

5. We are fascinated by criminals.  The success of The Sopranos and every Martin Scorsese movie ever made is testament to America's fascination with criminals and criminality.   Let's face it, at one point or another, you fantasized about being like Tony Soprano and just not taking shit from anyone, right?   That would be sweet, well, at least for a little while.   Psychologists even say that many people who want to be Police officers tend to identify with criminals - but for various ethical reasons can't go that route.  Catching criminals is the next best thing!

For whatever reason, though, it seems that a large part of the population is willing to engage skepticism whenever a criminal is arrested or convicted.  For some folks, it is a knee-jerk reaction.  Someone gets busted, and they just assume it was a set-up.  For many parents, this is the default mode, when their kids get into trouble.

Is there any harm in this?  Well, yea, there is.  Glorifying criminals and criminality only encourages that sort of thing.   We have already lost an entire generation of young black men to the allure of being a "gangsta" or whatever..  And sadly, many suburban white teens fall into this trap as well.  Being a criminal is a dead-end career.  And criminals - large and small - erode the very substrate of our civilization.

Before you expend a lot of emotional energy defending drug users or shoplifters, think about the last time someone broke into your car, or someone swiped your stuff.   Think about why you have to lock up your bicycle, even when you are just running into the store for a few minutes.   Are these people really worth your time and effort?