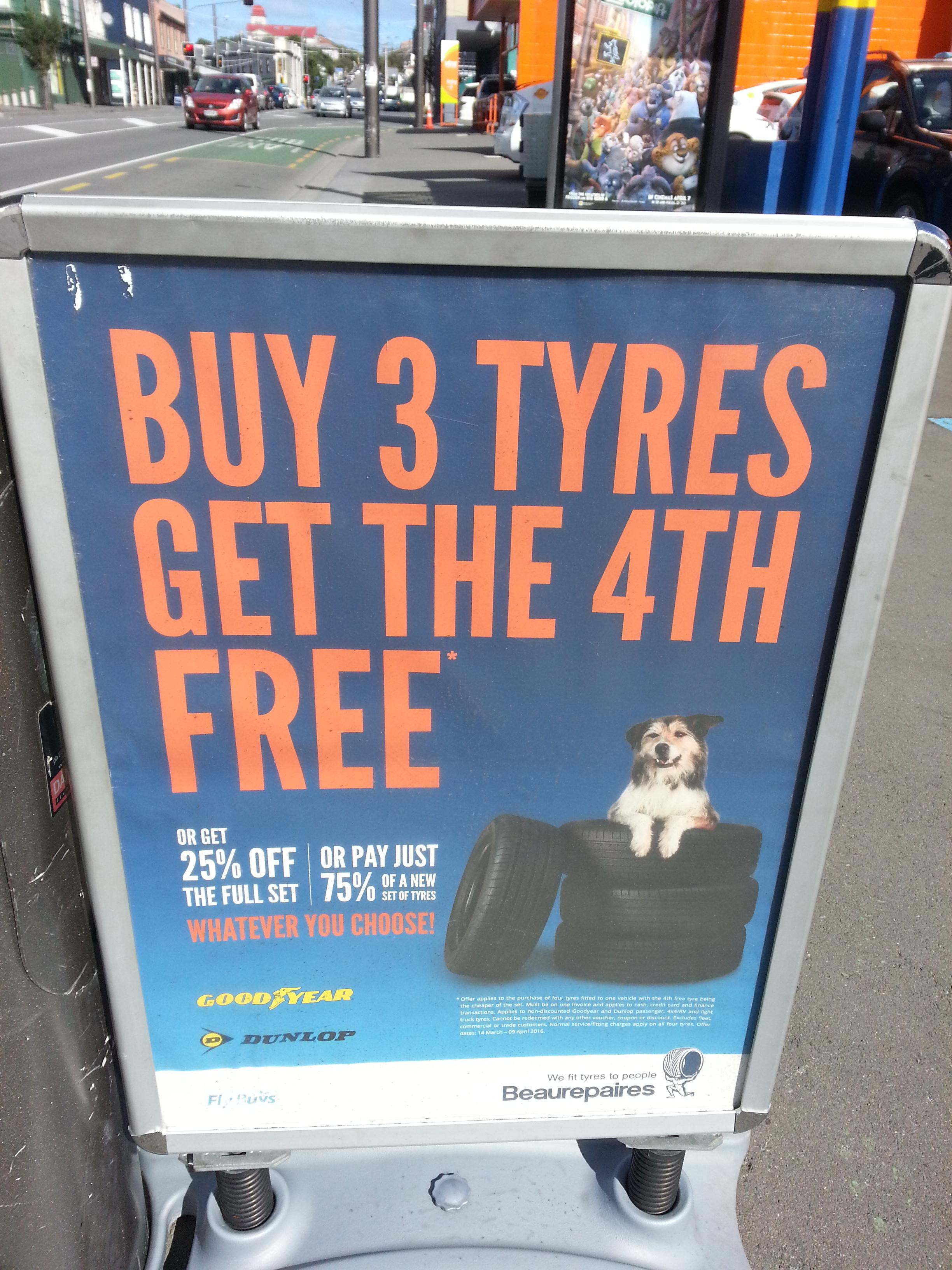 This promotion at first glance, makes no sense. The three "choices" are all the same - or are they?

A tire promotion offers you a "choice" of three options:

Now, mathematically, all three of these "choices" mean the same thing - that the price of the tires is 3/4 of the "retail" price.   Realistically, it means nothing at all.  Since no one ever pays retail prices, all you are getting is a set of tires at market price.  There is no real discount.  And likely, you'd get a better price ordering the tires online and having them mounted at Wal-Mart.

But Psychologically?  These are three different "deals" here, designed to attract three separate shoppers.   They do this because most people don't understand fractions and percentages, and people respond (Pavlovian) to different stimuli:

1. One person will bite on "buy 3 get one FREE!" because they like the word "FREE" and think they are really getting something-for-nothing.   They don't like the other two offers, because those are merely discounts or price adjustments without a "Freebie" involved.

2.  Another person will bite on "25% OFF!" because they are getting a discount (likely a couponer type of person) and they distrust the idea that anything is "FREE" or that they think the free item is of inferior quality.  The third option - paying is not attractive to them.

3.  Yet another person will bite on the "pay 75%" bit - although this is the smallest of the three groups because it has the word "pay" in it, and not "FREE" or "OFF".   He likes the idea of the lower price but dislikes the coupon-type idea of "25% off" or the gimmick of "FREE" things.

Yes, each of these three  groups of people would realize the offers are equivalent, if they stopped to think about it.  And if they really thought about it, and compared prices with other stores, they'd realize that this is just a promotional come-on and there is no real "discount" or "savings" involved.   Well, at least some of them would think that.

But people are funny.   There is a story that sales of a 1/3 pound hamburger were languishing at the local hamburger parlor.   Meanwhile sales of the 1/4 pound burger were thriving.  When surveyed, a substantial number of people thought that 1/4 was greater than 1/3, because four is greater than three.  Probably many more failed to own up to this, but subliminally thought the same thing - at least on first impression.

So, while this promotion may seem idiotic, the real idiots are not the marketing people who came up with it, but you and me - the consumers who bite on this nonsense.