How the Internet Really Works - Money 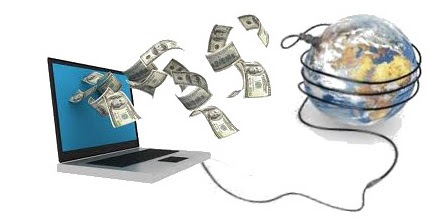 There is a reason we have the "dot com" extension.   "Com" is short for "commercial".

In the mail today, this missive:

My name is Yasmin and I work at **** Digital, a UK digital agency. We are working with the ****** Times on their Features Documentary series, a new brand of video storytelling films from a global perspective. We would love to collaborate with you on a blog post, if you are interested?

*___ ___ __ ___ _______ ______* video looks at China’s economy and labour force and investigates how one of the world’s most powerful and populous country’s has reached a critical new chapter in its history. What we were hoping for is if you could create awareness for the documentary by linking to the website and embedding the video in your post as well as providing context for the video by including an anecdote that makes its sharing relevant. Please find below the video, embed code and link to the website.

The deadline is 6th April 2016 and we have £75 to compensate you for your time and effort in creating the post (transferred to your PayPal within 15 business days after publishing).

I have blanked out the name of the video, the company, and the newspaper.   Not because it might be a bad video, but I don't want the appearance that I took 75 pounds to shill for some newspaper.   75 pounds?  Are they kidding?  My average posting gets about 375 readers within the first month or so.  Maybe some go as high as 600.   They are paying a lot for each click!

And that is one problem with pay-per-click marketing.   You really don't know what you are paying for.   And some folks have signed open-ended marketing agreements, not realizing that paying a few cents per click can add up to a lot of money when the ad is paired to a click-bait title.   You get a bill at the end of he month for a sizable sum, and yet none of those clicks amounted to any increase in business.

But the point is, what you see on the Internet today is not spontaneous content.  It is scripted content.   When things go "viral" they go viral by design.  Once in a while some Bubba puts up a cute video of their cat.  But most of the time, it is planned.  And in recent years, marketing teams have come up with videos that were intended to go viral - some rather offensive, such as the exploding VW commercial.

An offensive ad is still an ad - and one you are more likely to watch.   By making an "unauthorized" video, marketers can get free advertising exposure while the product maker can plausibly deny they are behind it.  VW is not the first - nor the last - to have such videos "leaked".
The great thing is, if he video is deemed offensive (which is what makes it go viral in the first place), the company then claims it was a "test video" made by a marketing company and they had nothing to do with it - they wash their hands clean like Pontius Pilate (who I understand owns a string of exercise gyms.  Or was that Adronicus Zumba?  I get the two confused).

The "offensive unofficial advertisement" seems to strike with regularity.   Ford claims that people were fired at an Indian Ad Agency due to an offensive ad showing depicting former Italian Prime Minister Silvio Berlusconi with three bound women and another depicting Paris Hilton kidnapping the Kardashian sisters.   Offensive?  Yes.  Free publicity?  Well, sure.  It was headlines for a slow news week and generated buzz about the product.  As they say in Hollywood, There is no such thing as bad publicity.

Some might be actual mistakes, such as this Coca-Cola Commercial.  But others are clearly quite intentional such as this Chrysler commercial.   And I am not the first to notice this trend - Business Week calls the unintentional offensive video "a new genre" of advertising.

Nothing happens on the Internet by accident.   We are spammed every day, and our demographic data is harvested to determine what impulses we will respond to.   Legions of Psychologists and Marketers (being redundant here) use carefully crafted models to generate "clickbait" article titles.   The 10 best this, the 20 worst that, what you won't believe, and so on.

Now, to be sure, advertising has always been with us.  But today, it can be very subtle and under-the-radar.   For example, in the "comments" section of the Chrysler ad is a comment from a "user" who says, "oooh that hemi! Thats what they all say YEAAAA!! I love my 300C!"  which is of course, how we all talk normally, in terms of products we buy.    Odds are, even the comment section is half paid-for comments uploaded by paid commenters.  And yes, they exist.  It is an actual job.

The Internet allows us to be seduced by apparent word-of-mouth.  Discussion groups are spammed with regularity.  And it is hard to tell a genuine product endorsement from a fake one.   I went to a campground the other day and it was miserable.   I went on TripAdvisor, and noticed a lot of other people were complaining about it as well.   But what was odd was that there were about six five-star reviews, all posted in the same week, from different users who all had one - and only one - review on TripAdvisor, ever.  And all lived within a 25 mile radius of the campground.  What are the odds?  And who camps next door to where they live?

And what seals the deal is the content.  The negative reviews mention the unpotable water, sewage backing up in the restrooms, long waits for food, rude service, and so forth.  They are from different people with other reviews on Trip Advisor.  The positive reviews?  Very short, vague, and with lots of exclamation points!  "We had so much fun!" one reviewer writes, "everything was great and we would go again!"   Very, very odd.

Blogs, of course, are no exception, and everyone hopes to "strike it rich" by writing a popular blog and making a penny per click.  But the vast majority of bloggers don't make a lot of money from the ads.   At about 128,000 page views per month, I certainly couldn't make a living blogging, based on Google and AdSense's arcane calculations.  So I haven't bothered with it.   Also, it seemed kind of obscene to blog about how bad PayDay loans are, and then end up with an ad for one on the same page - and make money in the deal.

Others have less qualms, and some have even cut to the chase and just copied all of my material into a new blog and tacked ads onto it.    At first I was pissed, and tried to have them taken down.   But in order to do so, Google requires you file a separate request for each page copied.  That's a lot of requests, and the spammers could just upload the material again and again.    The copied pages are formatted weirdly (cut and paste) and often are just fragments of posts, hoping to snatch internet searchers.  I doubt they make much money from it, but by copying hundreds or thousands of blogs (using a bot) they might pull in some dough.

If you are advertising on AdSense, you might want to think about how much you are spending and whether it is effective.   There are a lot of garbage content blogs like that, which are little more than Search Engine Optimization (SEO) keyword lists, with ads tacked in the sidebar.

And who responds to Internet ads in this day and age anyway?   Most of us have AdBlock Plus, and even if we saw the ads, we know not to click on them, as they are likely to be shitty bargains.

And, as you can see from the letter above, there are some folks who will pay (or at least promise to pay) for embedded content - which probably violates Google's TOS.   Embedded content is the ultimate product placement - subliminally advertising something while making it seem like a casual endorsement.

It is a brave new world, it seems.   Everyone is out to hustle for a buck, and everything you see has some hidden meaning or hidden agenda behind it - or worse, just may have such an agenda, and you have no way of knowing.

Who can you trust?  What can you believe in?   Can you even believe your own thoughts?    A lot of what we think are original ideas are often just things that we - along with millions of other people - see every day on the Internet or on television or in the paper or whatever.   When I write a blog entry, it might be motivated by something I saw on the Internet or heard on the radio or read in the paper.  Usually, these things don't occur randomly - someone somewhere decided to place them there.   So while I think I am having an original witty thought, likely it is just an idea that millions of other people are also having - having been exposed to the same data.

And that is kind of a depressing thought.  Are we all sheep?  Even (especially) the folks who watch the conspiracy theory YouTube videos?

Questioning everything does get tiresome over time, too.   But I guess skepticism is your only defense.  You can't really accept anything at face value without thinking of the motivations of (and identity of) the speaker or writer and their possible financial connections and obligations to the subject matter.