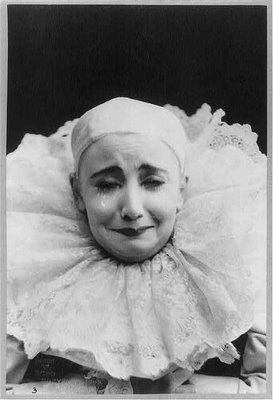 Being positive and being delusional are not the same thing.  In fact, most delusional people are very negative and have an overly pessimistic view of life.

In online forums these days, you read the same things over and over again:  Life sucks, the system is unfair, the economy is in the toilet, things are going to hell in a handbasket, no one can 'make it' anymore in modern America - and so forth.

If you put something online about how shitty things are, it will be "liked" and upvoted or whatever to the top of the page.   If you post something to the effect that things aren't nearly as bad as they seem, not only will it be downvoted to oblivion, you will be personally attacked.

Well, a few things.   First of all, the Internet, like Television, is a source of depression.   If you spend all day watching television, you will feel lethargic and tired, and feel bad about yourself for not getting any work done.  In addition, the television loves to push ideas about how awful things are, because people like to watch things that tell them they are put-upon and taken advantage of.  After all, they should be rich as Donald Trump - but for those Wall Street fat cats!   The fact they watch so much television and don't work has nothing to do with their situation, right?

Same for the Internet.  You spend all day online goofing off and you never get any work done, and you lose your job and it has to be someone else's fault.  The Internet is an evil time-waster of the first order.   And like with television, the people who put up articles online know that you will "click" on "ain't it awful" news but will shy away from "Hey, things are pretty good!" stories.

And this is nothing new.  During the Clinton era, the economy was booming.   And a lot of people, including myself, made a lot of money.  But to hear most folks tell it, things were all gloom-and-doom.    Even during good times, people claim things are not going well.

Take today, for example.   If you look at our economy in the abstract, you might note a few positive things:

2.  Inflation is at historic lows.

3.  The stock market, while stagnating in recent months, has just completed one of the longest bull runs in its history.

4.  Except in select markets, housing has largely stabilized.  Mortgage rates remain at all time lows.

5.  U.S. Industries are doing better than ever - the car business has recovered and all three "American" car companies are reporting record profits.

6.  The U.S. is rising the ranks of manufacturing output and is now second only to China - and is slated to pass China by 2020.

You say these things to people and you get a blank stare as a result.  "But the Obama economy has put America in the toilet!" they say, "We need to elect [Bernie]/[Trump] to [equalize income]/[make America great again!]!"

People like to feel sorry for themselves even as they live in the richest country in the world.   They want to feel put-upon, even though they own a television, a car, an air conditioner, a new smart phone, and are 20-30 pounds overweight.   In terms of world wealth, they are hardly poor.   But to hear them tell it, "but for" some actions of others, they would be really rich.

So what about the really rich?  How did they get to where they are?   Well, they didn't do it by feeling sorry for themselves or shouting down success of others.  In fact, a study shows that one common trait among "rich" folks is that they don't hang around with sad sacks of shit.

No one ever whined their way to wealth.   You can sit around and argue about how unfair things are or how Obama's transgender bathrooms are ruining America, or you can take charge of your own life, go to work, make money, spend it wisely (and invest it even more wisely) and become wealthy.   Being a sad sack means being poor.

And hanging around with sad sacks means being poor as well.   One thing I harp on in this blog is mental attitude.  If you hang around with people who are downers all the time, you will not succeed.  They will try to pull you down to their level.   They will be jealous - seething with jealousy - over any success you have.   They are best to be avoided.

This means, often, that you have to walk away from burdensome people in your life.   Dealing with a mentally ill girlfriend or family member is going to make you mentally ill.  Hanging out with "buddies" who just want to get drunk all the time or do drugs isn't going to pay off your Student loans.  Negative attitudes are like a virus - they spread.  And the more time you spend with people who are infected, the more likely you are to fall down the rabbit hole of depression and acquired helplessness.

I mentioned before in this article, some blogs by people who did amazing things like take three jobs to pay off their mortgage in five years, or a guy who started his own company by working 80 hours a week.   These things are less amazing than you think - they just require hard work, which really isn't that hard.

While I worked as many as three jobs while going to night school, I never felt "put upon" by all that work.  Delivering Pizzas at night or working the box line at UPS was work, but what else would I be doing with my time?  Watching television, listening to records, hanging out with friends, getting drunk or doing drugs.   Working, as it turned out, was more fun and enjoyable, as at the end of the night, I had something to show for what I had done, rather than just a bloated logey feeling from watching too much television.

Walk away from negativism and from negative people.   People want to sell you the idea that you are put-upon and that your life sucks and there is nothing you can do about it.  "Be one of us!" they say, "Just eat lotuses all day long and wallow in your own crapulence.

You can, however, take control of your life and stop being passive.  It does take effort, and it does take a certain mindset.   And not hanging out with negative people is one way to achieve that mindset.   You can't save the world, or save other people from their own folly.  You are not obligated to be friends with everyone, even family members, if they are toxic to your well-being.  Taking care of yourself is not only a personal obligation, but an obligation to society.
Newer Post Older Post Home