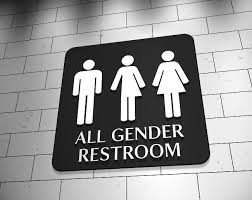 What is behind this transgender restroom bruhaha?  Politics - as usual.


Many folks are confused by what is going on in North Carolina.  Why are companies threatening to move elsewhere just because they won't let a guy in a dress use the Ladies room?   It makes no sense!

And if that was the real issue I would agree with you.   But the GOP has done a very neat job of tying three laws together into one, and then making sure the debate is only about one part of this three-part law.

North Carolina passed a "religious freedom" bill just as Mississippi recently did.  What is disturbing about these bills is that they allow any business owner to discriminate against anyone if they feel that serving them conflicts with their religious beliefs.   That is the first part of the bill.   The second part allows government employees to deny service to anyone if it conflicts with their religious beliefs.

These two parts of the Mississippi and North Carolina laws are part of the "Cake Wars" and "Gay Marriage" wars.   Apparently, to some people, the act of writing "Good Luck Sam and Bill!" in cake frosting is going to send you to Hell.   And a funny thing, we recently had a birthday party here for four people who were turning 50, 60, 70, and 80.   And the cake place gave me a funny look about having four men's names on the cake until I explained it.   You see, you have to explain things these days, just in case.

But getting back to these laws, they seem innocuous enough, until some yahoo decides that "his religion" prohibits him from serving Gay people at all.   So you are driving through rural Mississippi and are down to your last gallon of gas.  You go to buy gas in the next small town and they see your "Human Equality" bumper sticker and say, "We don't serve your type here!".   You can't get cell service, so you can't call a tow truck.   And they won't let you use the phone.   You can't eat in the cafe.  You can't stay in the motel.   All you can do is sleep in your car until someone rescues you or they decide to drag you out and beat you to death.

OK, maybe that is an extreme scenario.   But when you tell people - through the law - that it is OK to single out certain groups of people for abuse, well, people start to abuse.  We are seeing this right now in Russia, and of course, the Police refuse to investigate.

The pendulum of hate is swinging back to 1983 and pretty soon, "Gay Bashing" will be back in vogue again (as it was during the Reagan era).  In fact if you Google it, it seems to be already happening.

So what does this have to do with restrooms?  Well, the North Carolina law tacked on another provision - about bathrooms.  And the GOP has made sure that this is the only talking point to be raised in any discussion in order to make any discussion about the law seem ridiculous.   Men should go to the Men's room and Ladies to the Ladies' room, right?   These Liberals are being downright unreasonable!

If you can control the language of the debate, you win the debate.   So even seasoned journalists fall into this trap (particularly NPR) and never investigate the other parts of this law that are really what people are objecting to.

Republican politicians are obsessed with restrooms - that is where they are usually arrested for soliciting undercover police officers.   Well, they are, with regularity.

But that comment brings up a number of issues with regard to restroom design, and maybe this discussion is useful in updating the architecture of the modern restroom.

Back in the 1980's, Republican politicians were in fact being arrested in public restrooms for soliciting sex from undercover police officers.   Back then in the closeted era, many public restrooms along public highways, in college libraries, department stores, and other areas were notorious "cruising" areas for closeted men - often married men.   There was even a little book - Dameron's Guide - that had a listing of which places to go to (it has since morphed into a travel guide).  And it was pretty out of control, too.

Since then, the highway departments have bulldozed most of the old seedy restrooms and reduced them significantly in number.  In Florida, for example, they would tear down four rest stops and replace them with one mega-travel center.   These were less costly to maintain, easier to police, and could offer travel information and tourist destination guides.   By that time, of course, men were no longer using restrooms for sex, as being gay was less stigmatized and there were other outlets.  Today, young gay men (and closeted married ones!) use "apps" on their cell phone like Grindr to find their sexual mates.

So it is possible to change restroom architecture in response to changing conditions.  And those changes were for the better.

A second problem with restroom is gender inequality.   If you go to a concert or ball game or whatever, there is always a line at the ladies' room (a long, long line!) and no line at the men's room.   Men can use urinals and don't need to "sit down" to pee.   I was at a concert once (classical) and a group of men took pity on the line of women waiting to go and closed off the men's room and let the ladies use it until the two lines were equal in length again.   That's how bad it gets.

Some restaurants and bars (and grocery stores like Trader Joe's) solve this issue by having "one-holer" restrooms (a toilet and a sink, maybe a urinal, in a single room with a lockable door).  These are gender-neutral restrooms and provide privacy and security.   Moreover, they don't discriminate based on gender.  The line for the restroom is THE line, not separate lines for men and women.

Then there is the issue with children.   If you are a Mom shopping with your young son, or a Dad shopping with your young daughter, you have a dilemma.   Do you let them go into the restroom alone?  Or do you take them into "your" gender restroom to do their business?   Dear Abby usually has a letter or two every other year on this topic - at what age is it inappropriate for Mom to bring her little boy into the Ladies room?   It gets awkward.

Again, architecture to the rescue.   In some rest areas they have "family" restrooms which are handicapped accessible, have changing tables and are basically just a private room with a toilet and a sink.  These are, in effect the "one-holers" I mentioned above.

So why do we still have separate "gang" restrooms today?   This goes back in time to earlier years when the cost of plumbing and construction was much higher.   When I was in High School, we had "gang showers" - large tiled rooms with dozens of faucets.   It was cheaper to build, I guess, but there was no privacy and a lot of towel-snapping going on (plus leering gym teachers).   Today, most modern high schools have separate stall showers, as do most health clubs and other athletic venues.

Similarly, the "gang" restroom with its row of stalls was probably cheaper to build that a series of separate restroom "one holers" that can accommodate one at a time.

The single-occupant restroom, however, does have a lot of advantages to offer:

1.  It is gender neutral in that women don't have to wait in separate lines.

2.  If there is a maintenance issue, you can close one of a number of such restrooms with little or no impact.  If you close the men's room or the ladies' room, you have to get porta-potties for one gender to use until repairs are effected.

3.   For families with small children, the single-occupant restroom is a godsend.

4.   All of them can be made handicapped accessible, so the handicapped don't have to wait for "the" stall or be stigmatized.

Oh, and it solves this whole "men in a dress" using the ladies' room thing.

Of course, retrofitting existing structures from two gang-style restrooms to a plurality of single-occupant restrooms might not be practical and could be costly.   But in a lot of new construction, that is exactly what architects are turning to.   And quite frankly, most people prefer their own personal restroom to using some gang-restroom with multiple people farting and shitting and pissing together, with nothing separating them but some flimsy metal divider.

But again, realistically, that is an architectural solution that will only work going forward, and it would be more costly than conventional "gang" restrooms.

So what about these "Transgender" people using the wrong restrooms?   Well, despite their high profile in the news, the number of transgender people in the country is very, very small.   Many of them you would not recognize as transgender (ask Eddie Murphy!) so you would never notice them in the "wrong" restroom.   In fact, a transgendered man (appearing as a woman) would make quite a scene in the men's room, and probably be assaulted.

And sadly, this is where it is all headed.   After this law was passed, there have been a number of episodes where men have followed women into the restroom to challenge their gender.   A law designed to keep "men out of the ladies room" has resulted in so-called restroom vigilantes to start invading the ladies' room as the gender police.  And one overzealous security guard actually assaulted a Transgender woman in Washington DC - apparently believing that North Carolina's law was enforceable there!

One man even assaulted a parent for bringing their child into the restroom!   I guess kids will just have to pee on the floor of the Wal-Mart from now on...

Is there a threat of transgender people molesting women and children in restrooms?   One conservative site claims this is so - citing five examples of such incidents (one in Canada - does that count?).   But the funny thing is, since this law came out, there have been at least as many examples of men harassing or assaulting women and questioning their gender - sometimes even following them into the ladies' room.

But again, it is all a distraction.   The real reason people are upset about the North Carolina law is not the restroom part of it.   If a transgender man can "pass" as female, no one is going to notice if they use the ladies' room, law or no law.   What is disturbing is the other parts of the law which basically codify discrimination in favor of "religious liberty" - as if running a business and serving the public was a religious calling.

I must, however, enter one caveat:   There have been some isolated incidents where some Lesbians (and it appears to be mostly Lesbians at this point) have gone out of their way to find a Christian bakery or flower shop and then make some big stinking issue about their refusal to bake a wedding cake, cater a wedding, or make flowers for the wedding.   Yes, if you serve the public, you have to serve the public.

But on the other hand, going out of your way to tweak people isn't right either.   They put those Jesus fish on their business signs for a reason - so you can avoid narrow-minded people and take your business elsewhere.    Seriously, though - folks who make their religion part of their business plan are often very crappy business people and should just be avoided.  You will get lousy service and crappy prices just because they are not very smart people.

When "praying" is your business model, you are sure to go bankrupt.   Jesus doesn't handle accounts receivable, you do.  The folks who cloak themselves in religion are usually using it to cloak their incompetence.  To me the Jesus Fish on a business sign is like a one-star rating on Yelp!   Just avoid.