The Reality of Trump 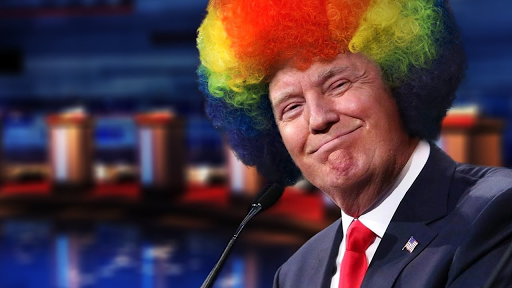 So far, about 3.5% of Americans have cast ballots for Donald Trump.   Does this mean he is popular with a majority of Americans?

I few months back I opined - like so many others - that Donald Trump would burn out.   You can't just keep insulting group after group of people - Mexicans, Muslims, Blacks, Women, Liberals, Democrats, whatever, and still get elected.   Combined, all the people he has insulted make up the vast majority of folks in the USA.

But I forgot about our primary system and how it distorts the will of the people.   We have 50 States (and some odd territories and holdings, like the District of Columbia) and each one seems to have its own method of chosing a party nominee.   Some States have open primaries, some States have closed ones.  In open primary States, anyone can vote on either party ticket, so the voting tends to be more centralist.  In closed primary States, only registered party members (a minority of voters from both parties) may vote in primaries.  In those States, a small number of people can vote, and not surprisingly, they tend to go for more extreme candidates (More Right for Republicans, more Left for Democrats).

Caucus States - which oddly enough Trump has not done well in - are also skewed, in that you don't just vote, but have to sit around and argue with your neighbors over which candidate should win, and if a candidate doesn't get enough votes, they balloting can continue for hours.  Again, these tend to favor the true believers, as the middle-of-the-road people really don't care enough to get involved.

The other side of the picture is the media.   The media loves a good "Story" as it can sell toothpaste and SUVs while you watch.   And a story with a lot of heat and no light is what people will tune in to see.   Reality television has taught us that what Americans really want to watch is people bickering and fighting.

The chopper show, for example, started out as a documentary about building motorcycles.  It quickly devolved into petty arguments and throwing wrenches - as did the hot rod show.    Most people are bored with discussions about compression ratios and carburetors.  If you want to watch that sort of thing, watch Jay Leno's Garage.   What they want is conflict and shouting and name calling.

I was recently trying to watch Gordon Ramesy's Kitchen Nightmares as there was some controversy about a restaurant in Arizona that went belly-up when the owner tried to shout down people on Trip Adviser and Yelp with insults.   I was disappointed in the show because it was not about food or how to run a restaurant.   In each installment, he goes to the restaurant and then insults the food ("This is garbage!").    He doesn't critique the food, as a real food critic would (perhaps saying why they felt the food was bad and how it could be improved).   Instead, in reality show tradition, he just insults the food by making vague and general comments (conclusory statements)  that it is "rancid" or "garbage" or "tasteless".   The show then goes downhill from there, with insults of the chef and owners and then carefully staged arguments and pot-throwing.   Worse yet, in the middle of the dinner rush he stands up and inspires all the diners to complain about their food as well.   This man is not a chef, he is a fraud.

But that is what American's like, apparently - superficial crap and playground fist-fights.  All show and no go.   And our news is no different.   So when the Donald insults someone, the news media laps it up, and people who were raised on reality television and think this is normal behavior lap it up.   "Way to go Donald!  You show them!"   The childish insult and come-back has replaced real thought or discussion of policy.

This brain trust is seen as "winning" a debate with Ted Cruz, when in fact they come across as petulant children.

The reality is, of course, that America has not "spoken" with regard to Donald Trump anymore than it has with regard to Bernie Sanders.   Tiny minorities of people have voted in the primaries - according to some sources, as few as 3.5% of the population has actually cast a vote for Trump, and by the end of the primary season, he will be nominated based on the opinions of about 6% of the people.  More people have voted against Trump (for other candidates) so far than for.

(Hillary's case is the opposite.  Despite the wild claims of Bernie Sanders and his supporters, he has not won the popular vote and the election is not being "stolen" from him by superdelegates.  Hillary has won more elected (pledged) delegate than Sanders, period.)

Trump won not because he was popular, but because there really was no other candidate.   Fielding 16 candidates for the nomination turned into a nightmare.   Few, if any of them were Presidential material.  If you combine the support for all those other candidates, the votes outnumber those for Trump.

Of course, this is all good news for the Democrats.   Republicans are running away from Trump, particularly Congressmen up for re-election in moderate States.   The Democrats are looking to reclaim the Senate and perhaps a few seats in the house as well.   And in all the national polls, Hillary trumps Trump, by double-digits in some instances.

But there is another odd aspect of American politics - the electoral college.  You need 270 electoral votes to win the White House, and so far, it looks like Hillary has a lock on 217 of those.   She needs only a few "swing States" to win, whereas Trump would have to win every single swing State to gain the White House.

And then there are my friends in Northern Virginia.   Virginia is a swing State and it went for Bush twice and Obama twice.   The counties/cities of Fairfax, Arlington, Alexandria, and Richmond tend to vote blue and outpopulate the rest of the State.   I have friends there who voted for Bush - twice.   But when McCain chose Sarah Palin as his running mate, they switched to Obama.   I was kind of shocked by this, but then it made sense.  These were college-educated professional people, and the likes of Sarah Palin with her blue-collar "down to earth" ignorant view of the world was repugnant to them.   I am not sure they will be thrilled with the likes of Trump, either.

And the middle-of-the-road voter is who you have to win - the independents and the moderate Republicans and moderate Democrats.   And I don't see Trump doing that.

The other problem is the economy.   Trump supporters say they want to "Make America Great Again!" and that we need a "great leader" to "lead us out of this mess we are in!"

But what mess are we in?   Low inflation, 4.5% mortgages, 5% unemployment, a bull market, record profits - if this is a "mess" then lets get messier.   Our economy is doing far better than it was in 2009 and far better than back in 1980 when inflation was 10% as was unemployment and mortgages were 14% or more.   It pays to put things in perspective.

People tend to vote less for radical change when things are going well.   Obama took office under the mantle of "Change" because the economy was indeed in ruins.   Barring a stock market crash this year, it is doubtful the economy will be a motivator for change in this election cycle.

Of course, it helps that Hillary has more money to spend that Trump, has a better "on the ground" organization in place, and has support among business people and even more traditional Republican stalwarts.   Hillary really only needs to keep her mouth shut and just let "The Donald" keep opening his.   Eventually, even Fox News people get tired of the Sarah Palins of the world.  Eventually.

The brain trust in the video above is typical of the Trump supporter - young, white, and male, with a sense of entitlement.   These are likely not college-educated people.   They have little or no memory of past economic downturns.  Ronald Reagan is an historical figure to them.   They were probably still in high school or college when the economy tanked almost eight years ago.    They are also the demographic least likely to vote, too.

But of course, it is hard to predict these things.   I was wrong thinking that Trump would drop out early on.   Polls today are notoriously inaccurate, as they use landline phone calls as a means of gauging opinion (and there are so many con-artist "survey" calls out there, few people answer surveys anymore).