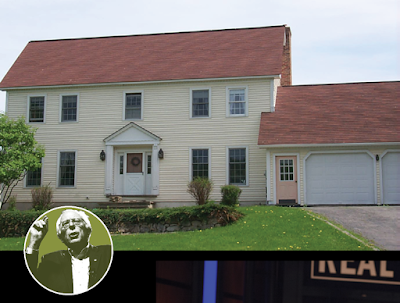 In my last posting I was analyzing Bernie's finances, which is hard to do based on a single year of tax returns.  Funny thing, but this guy who wants to make our government more transparent is very opaque when it comes to his own income - most other candidates have released two, three, four or more years of tax returns (in the case of Hillary, nearly all of them!).  What is Bernie hiding?

Property tax records and deeds are a matter of public record, of course, and you can find this data online.  Finding his house address online so I could spelunk the database was kind of hard.   But after some sleuthing, I was able to find his home address and tax records.   The Bill Maher site had a photo of Bernie's house, and this site, had a map with the house which gave a street but no address.   Fortunately there is a "fantasy football" company on the same street, which gives an address number, and from that, we can find the range of house numbers.

Zillow provides a list of home prices on the street, but when I click on Bernie's house, they offer no opinion as to its value (they have no trouble doing this with my house!).

The assessors office lists the property under the name of "not available" - obviously the secret service has been at work - good job boys!  It took repeated attempts at a number of sites to find his property tax data, but I was able to find it.  But I am not interested in knocking on his door (God forbid, he would physically attack me as an evil 1%'er even though his income is about 5 times mine).


When I try to find the value of his home on Zillow, it says "address not found" for every house on the street.

Trulia, however, lists the house as being worth $146,000 which means when Bernie paid $405,000 he paid over double what the house is worth today.

One thing that is puzzling is that his property taxes are shown as $7,889.12 while he claims over $14,000 in property taxes on his tax return.   It appears he has a rental property, but the property taxes for that should be shown on a Schedule C, not as personal property tax deductions.  I found out later he has a condo in DC, which probably accounts for the balance of the property taxes.   He certainly lives in some high-tax areas, to be sure.  Nice thing about Socialist States, they do tax you to death. But Bernie is angry at Bankers and not at himself, of course.

It may be that my data is all wrong and I have the wrong house or wrong address (UPDATE:  The deed records seem to indicate otherwise, however).   But I think the "not available" moniker on the listing is an indication it is the right house, because if you search on the last name "Sanders" nothing comes up, and he clearly lives in Burlington and the photo of the house is the same as the one shown on television.

A search of the deed records of Burlington, Vermont is interesting - it turns up a number of records in the name of him and his wife.  It appears they own or have owned a number of properties in Burlington through the 1980s and 1990's.  The current house was bought in 2009 as the tax records indicate.  He also appears to own a rental property in Burlington.   Old Socialist Bernie is also an evil landlord exploiting the working class!  Well, he does seem to take in $4500 a year on the property, about what I make on mine, in a good year.   So maybe we're both evil, or not.

The weird thing is they show a "discharge" of a mortgage on their current house in 2013 to MERS which is a loan servicer.  Since he is claiming $22,000 in mortgage interest in 2014, I can only assume he refinanced his house and that may explain how he paid off the $25,000 to $65,000 in credit card debt reported by other sources. If this is true, this is not a very astute thing to do.  What is even more troubling is that he is reporting $22,000 in mortgage interest.

I am trying to use my mortgage interest calculator but I cannot get it up that high, even if I assume the total debt is $400,000 at 5%.  Is he using sub-prime lending?  Or is he lumping his rental property payments in with his home payments (which is improper, rental income property interest should be reported on Schedule C, which is what I do!). It leaves me with more questions than answers. Of course, I did a little more research and it appears that Bernie also owns a Condo in DC which is also mortgaged for $50,000 to $100,000.

What is interesting about Sanders' disclosures is that they are so skimpy in details.  One year of tax returns, and a financial form which includes only ranges we can estimate from.   Even assuming he has a $100,000 mortgage on the DC condo, the $22,000 in interest is still hard to fathom.   This guy is mortgaged to the hilt.

But I think I found out why Bernie is angry.  He over-paid for a house that is strangling him with tax bills and interest payments, and since he is "upside-down" on the house, he is house poor, even with a six-figure income. And this has to be someone else's fault, right?   Those nasty bankers!  Loaning him all that money!  He'll fix them!

UPDATE Check out this article about the Burlington College Real Estate Deal.

The Sanders' are not very astute about Real Estate!

UPDATE: The college is now closed, a victim of the crushing debt imposed by Mrs. Sanders, as well as the problems I have noted before about small liberal arts colleges.