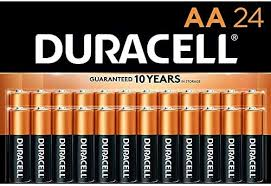 So many things are powered by batteries these days, and paying for them gets kind of old.


I recently ran out of AA batteries.  Those and AAA batteries are the staples of small home appliances these days.  Remote controls use them, my mouse uses them, small LED flashlights use them.   But they are in other applications as well, from the ridiculous to the sublime.   Sprinkler timers use 4-6 AA batteries.  The Swiffer (TM) floor mop uses four to spray some sort of liquid (a simple hand pump just won't do!).  Even a lighted vanity mirror given by a friend runs on four AA batteries.

Sadly, the number of home electronics requiring batteries has increased over time.   I remember when I was a kid, getting a motorific car set for Christmas, with no batteries.  My parents rummaged through the "kitchen drawer" for some and found a pair of half-dead Ever-readys for the little car.   Within a few hours, they were dead, of course, and my parents said, "already?  But I just gave you some!  Why can you play with the car without the batteries?"  - as if that would be any fun.   Our generation was raised on "batteries sold separately."

And they were sold separately not to be cheap but because batteries leaked a lot back then and they could quickly ruin toys and electronics with their brown ooze.   They didn't last long, either.   Enter the Alkaline battery, which promised to last longer and leak less.  And today, the "coppertop" Duracell is still my favorite battery.

But what is a good price on batteries?   Am I getting ripped off?   Often, I will buy a package at the supermarket or the big-box lumberteria without thinking of the price.  Bad Move.  There is a reason they put these by the checkout as an impulse buy.

Now again, simply not using batteries is the obvious way to save on them.   Use a wired mouse.  Get out of your chair to change channels.  Buy things with wall-pack transformers.    But not consuming at all, as I recently noted, isn't worth exploring as it simply isn't very hard to analyze.  Net cost: ZERO.  Done.

Another alternative is rechargeable batteries and maybe one I should look into.  They are not cheap, but they can be recharged.  My only experience with them is the old NiCad versions back in the 1990s, which didn't last very long or work very well.   I presume Lithium Ion types might be available today - and maybe they will supplant the old Alkaline in short order.  (I checked, they are available, but not rechargeable, and cost $2 apiece but supposedly last for years)

But getting back to batteries, what is a good price to pay for batteries?  I never analyzed this to see if I was getting ripped off or not.   Taking the Duracell AA battery as an example, let's shop around and come up with some benchmark pricing.

On Amazon.com, these batteries sell from anywhere from 32 cents (for a package of 100) to nearly 50 cents apiece.  Amazon "Basics" batteries are 27 cents apiece in a package of 48.   Frankly given the number of these things I go through, buying 50 or 100 isn't a major investment.

Wal-Mart is no big bargain, with the batteries all going for over 50 cents each, although they have some sort of store brand for 16 cents each.  Off brands of course are cheaper, but may not last as long, so it is comparing apples to oranges.

So after a little research, it seems that 35 to 50 cents is about what I should expect to pay, with anything over 50 cents basically a rip-off.

Funny thing, though.  56 years on this planet, and I never knew the price of batteries until now.

Now about those 9V batteries....
NOTE:  Thanks to readers for links to rechargable batteries which are available on Amazon.

I will have to look into these as they might be cheaper overall, but also more environmentally friendly (no more throwing away batteries).

The main point of the posing was, though, that I had no idea what a "good" price on a battery was.  I could tell you a decent price on a car, a set of tires, a car battery, a dozen eggs or a case of beer.   But batteries were always one of those things I just bought and never checked the price which was insane, as some simple searching online shows that the price varies from 17 cents to over 60 cents.   That is quite a spread.

I think it is a good idea before going out to purchase anything to have a good idea of what the market price is for that commodity.   Knowing what one battery cost, one beer cost, one egg cost, is useful (and easy to remember) as retailers package things in odd lots (intentionally, of course) to obscure the overall price.
UPDATE:  I have been buying 2800 mAh rechargable batteries on eBay and they seem to work great!  Not only are they rechargeable, but they don't leak goo all over my electronics like a certain brand.