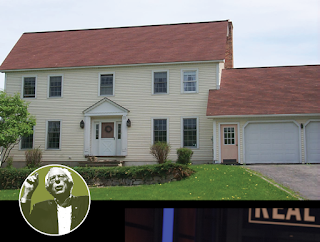 Sanders paid over $400,000 for this ugly vinyl-sided shitbox colonial - and still owes a pile of money on it, even though he is old enough to be retired!  With no savings in the bank, if he ever loses re-election to the Senate, he could be foreclosed upon! (if he didn't have such a cushy pension).


Why is Bernie so angry?   He's angry because he has failed at life.   Yes, he has been elected to the Senate as a Socialist from Vermont - insuring that he has little or no influence on Congress.   And he's running for President of the United States, but isn't winning.   Ralph Nader ran - a number of times.  He's a loser, too.

Why do I say that Bernie is a failure?  Look at his tax return from 2014.  (why he has not released 2013 or 2015 is not clear, I suspect they might not be pretty).  He made close to $200,000 a year with his salary in the Senate and his wife's business income.  That's some serious bucks and clearly makes him 1%'er material - if he had bothered to save any of it.   Sadly, he reports only a few dollars in interest and dividend income, which means he has little if any after-tax savings (he has a Senate Pension, however, and could have an IRA which is not reported).

But what is really sad is that the shitbox house shown above has a tax bill of over $14,000 a year.  That's about $1200 a month or more than most people pay in rent.   On top of that, he's paying close to $23,000 a year in mortgage interest at a time in his life when he should have his house paid-for, or at least be looking at the last few years of a mortgage (when the interest payments wind down to nothing).

And it is not that he hasn't had the opportunity to save money.   Instead of buying a two-story four-bedroom house for two people, he could have downsized to something more appropriate, easy to care for, and less costly - and banked the difference.

And he's made a six-figure salary for a number of years - well over a decade - and yet still has a mortgage and no after-tax savings to speak of.

In other words, he is fiscally irresponsible.

His wife is an interesting person as well. While President of Burlington College, she expanded the campus by a factor of four - and nearly drove the college into bankruptcy.  I am not sure what she is doing today, but they are showing about $5000 a year income from her "business" whatever that is.  Perhaps these are book royalties or something.

The Sanders' are a profile of everything that has gone wrong with the middle-class in America.

1.  They made good money - six figures - but managed to squander most of it.

2.  They bought a huge ugly "look at me!" house and are spending a ton of money on taxes and mortgage interest - chasing deductions the good old American way!

3.  They have (or had) a ton of credit card debt because of the paycheck-to-paycheck spending mentality.

4.  They want to blame Wall Street or the Banks for their woes, when it was their own actions who got them there.

And you might add a special 5th circumstance, which applies to government employees:

5.  As government employees, they can rely on a pension and health care that the rest of us will never see.

In other words, they are pretty typical upper-middle-class Americans.  Broke and blaming it all on someone else.

This is the guy we want for President?   A guy who doesn't know the meaning of spending restraint or budgeting his lifestyle?   A wife who drives a college to near-bankruptcy with grandiose expansion plans?

Sorry, but I don't see it.   It is funny, but in one of my previous postings, I profiled another Vermonter who actually ended up as President - Calvin Coolidge.  Forced to scrape a living from the rocky soil of his family's farm, he learned early on the merits of frugality.

Sanders, it seems, learned early on the merits of spending other people's money.