Upside Down on a Car? 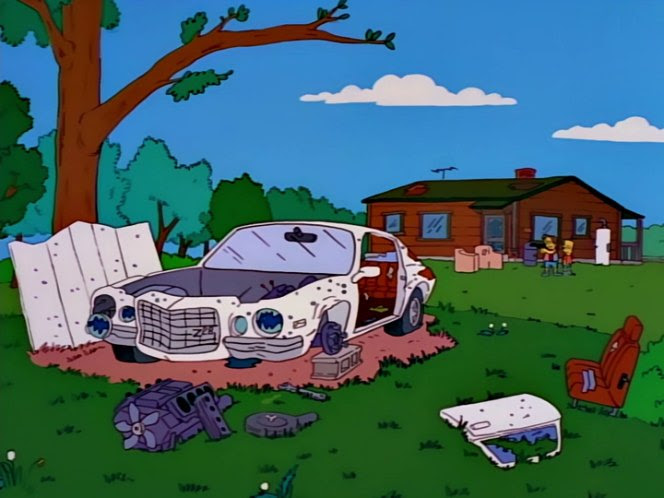 Nelson:  "That's our shooting car.  Three more payments, and it's ours!"


I wrote a while back about comments made by Bill Ford, who runs a small car company in Detroit. His concern was that the financial debacle of 2008 - in which easy credit on onerous terms caused people to borrow more than they should - was being repeated all over again.

He was a little nervous that car loans were now being extended to seven years and that this would ultimately backfire, as people would hang on to their cars longer and not trade in as often, which in turn would eventually hurt sales.   Even if people wanted to trade in, the negative equity in their car loans would mean they would have to fold that negative equity over into a new car loan - at a higher interest rate - and the credit industry would once again systematically destroy people.

Negative equity in vehicle loans is problematic.  But it is a game that anyone can play.   In RV and Boat loans, it was epidemic.   To make these largely unnecessary vehicles (luxury items) "affordable" to the average Joe, the finance companies would extend the terms of the loans to ten years or more - sometimes 20 - which was far longer than the purchaser intended to keep the vehicle, or indeed, far longer than it would last.

The problem is, throughout the life of most of the loan, they were "upside down" and would have to come up with cash to pay off the loan, if they decided they no longer wanted the vehicle.  And often these owners had no cash, so they kept making payments on a rotting boat or RV parked in the back yard.  Or like one friend of mine, end up getting a home equity loan and spend their retirement years paying off debt instead of enjoying retirement.

Auto loans are a slightly different beast - or at least were.   In this era of $70,000 pickup trucks and $100,000 SUVs, the auto industry is heading to where the RV and Boat industry were a decade ago.   You don't "need" to spend that sort of staggering amount of money for transportation to and from work.   And no, most of these dudes in these fancy trucks are not hauling loads of sand or cinder blocks - they are merely commuting to a job.   But people want fancy things - it is indeed human nature.

The problem is, lenders are all-too-willing to lend you money to buy things like this, and not tell you that no, you really can't afford this.   And so people buy this stuff, convinced they can afford the monthly payments, even if it means delaying funding their 401(k) or IRA or doing without health insurance.

That's bad enough.   What's worse is that down the line, with these extended loan terms, the vehicle will always be worth less than the loan amount, until only a few months from the end of the loan.

It is a double-whammy screw-job of a loan.

Compounding this even further is the fact that a lot of people don't take care of their vehicles and thus long before the loan is paid off, the vehicle is basically junk.   We see this a lot in the country here, where some redneck will be driving a three-year-old pickup truck that looks like it has been though a small war.  At this point, they can't trade it in, as the dealer will give them nothing for it.  So they keep it, making matters worse with some ill-conceived "mods" until it is hardly a vehicle at all.

Pretty soon, it is out in the back yard, the new shooting car.   Three more payments and it's all ours!

You laugh and think that is a joke.  When I grew up in Central New York in Madison County (home of the largest number of sketchy financial advisors!) there was a nearby town called Erieville.  It was a depressed area and a friend of mine grew up there.  His parent's house was covered with tar paper and looked like a scene out of deliverance.   On the hill behind the house were a number of scrawny goats, a couple of chickens, and a very sad-looking cow - along with several old cars.

One day, we were in the living room, and his Dad, taking a pull off a fifth of cheap bourbon, picked up a rifle, flung open the kitchen window and started shooting at one of the cars in the back yard - a mid-60's Plymouth, I believe.   When our ears stopped ringing, everyone laughed like hell.   Well, his family did, anyway.  That's what passed for entertainment in their home.  That and the eight-foot satellite dish in the front yard.

Three more payments and it's all ours!

Such folks are prime fodder for sub-prime lending, which is the practice of giving shitty deals to the folks who can least afford them.  A reader directed me to this article about the latest trend - increased delinquency in these loans.  And it is frightening how people get suckered into these bad deals:

Violette Morin, of Pulaski, N.Y., a 74-year-old grandmother, said she did not need or particularly want to buy a car. But after receiving a mailing from a local dealership promising a prize of a pearl necklace and a fishing rod, she visited the used car lot in May 2015.

The dealer qualified her for a $20,350 loan, according to her lawyer, to purchase a 2011 Ford Fusion. Earlier this year, she stopped making the payments. “I eventually had them come and get the car because I couldn’t pay for it,” said Ms. Morin, who lives on Social Security, receives food stamps and lives in subsidized housing.

That's a lot of money for a used Fusion, to be sure.  Ms. Morin probably can walk away from the deal, be hounded by creditors for years.  Or she will die long before she can pay it off.  Fortunately, she was able to wiggle out of the mess, only because the lender screwed up the paperwork:

Ms. Morin, the borrower from New York, said that when she asked for a copy of her loan application, she noticed that the document listed her monthly income as more than $3,300, which was false. She collects about $850 a month in Social Security.

Ms. Morin worked with the consumer law clinic at the Syracuse University law school, which contacted the lender, a credit union, on her behalf. Ms. Morin’s loan was forgiven and her default was scrubbed from her credit report.

Others are less fortunate:

Nashua Moore, 28, gets up at 2 a.m., takes two buses, and reaches her office in Las Vegas by the time her shift as a medical dispatcher starts at 5 a.m. She schedules plenty of time to avoid being penalized for being late. By car, her commute takes about 20 minutes, she said.

“I was desperate to get a car,” said Ms. Moore, who went back to work this spring after her daughter was born.

She borrowed $6,580 at a 30 percent interest rate to purchase a 2008 Chevrolet Impala. Her car was repossessed this fall, after she got in a dispute with the dealership. She is now working with a legal aid lawyer to get her down payment back and other damages.

30% interest rates are, of course, scandalous.   But when someone offers you a loan at this interest rate, it is a sure sign you shouldn't be taking the loan.

But why would lenders even offer such deals?   Surely the high delinquency rate of these loans - and the high default rate - would mean that they would lose money on each loan.   If enough people default and declare bankruptcy, the lenders will lose money and stop making these shitty, unethical deals, right?

Yes, in the olden days, when I grew up, people didn't loan money to folks who couldn't pay it back.   And the simple reason was, if you did, you were a fool.   The borrower could declare bankruptcy, wipe out the debts, and often end up keeping their car and "tools of the trade" and end up better off than they were before bankruptcy.

And yes, a lot of people abused this.  So they changed the law.  Maybe too much.   Today, you have to "work out" the debt over a period of years, with a judge deciding how much you can afford to pay every month.

What this means is the borrower, at 30% interest, often makes enough payments before the car is repossessed to actually pay for such a car.   (NOTE: As one reader noted, many of these "dealers" charge enough in down payment to more than cover what they paid for the clunker at auction!) The lender then repossesses the car and sells it, which is now pure profit.   Then in bankruptcy, they get another bite at the apple when the borrower is forced to "work out" the debt.

I have written about this before - in today's economy, you make more money by ruining people than by doing business with them.   A young person starts out in life, gets screwed by college loans.  With a ruined credit rating at age 21, they are forced to take on odious deals - which are dangled out like candy.  Rent-to-own furniture!  Get a new credit card!  Buy-here, pay-here used cars!   Before long, they are in bankruptcy court, where the fun is just getting started.

The problem with this model of absolutely destroying people is that you run out of people after a while.

Either the number of fools (motley or otherwise) is finite, or they start wising up and say "no" to payday loans and other shitty deals.

Oh, what am I saying?  There's a sucker born every minute - its the motto of our country.

Democrats have tried, in vain, to rein in this sort of thing.  They created a Consumer Protection Agency to weed out the worst of these deals and try to warn people about them as well (more on that in a coming post).   The problem with this approach is threefold:

1.  As I have noted in the past, the people who will shout the loudest to protect predatory lenders are their victims.  The efforts of the Democrats to help the poor and working class avoid these raw deals were clearly shouted down by the election of Donald Trump. Well, not shouted down, but a combination of people shouting and other people just not caring enough to even vote.

2. The Republicans have hampered the Consumer Protection Agency at every turn, from its inception, limiting what it can do.  They will kill this baby in the crib.

3.  In a few short months, the Consumer Protection Agency will be a vague memory, as the GOP wipes it out of existence.

This illustrates the problem in trying to protect people from themselves.  Not everyone will end up like the lady in Pulaski, NY, with a legal aid attorney helping her unwind the debt (which probably still cost her a lot of money, in terms of car payments, down payment, lost trade-in, etc.).

When it comes down to looking out for your own best interests you are basically on your own, 99% of the time.

And what most of these raw deals have in common is emotional thinking.  People don't need a new car so much as want one for status reasons. People buy houses at the height of the market for emotional reasons - they want the status of owning a home (the most expensive purchase of their life - one that could ruin them - and all over a sun-nook and a fancy kitchen impress friends!).  The poor get payday loans so they can order take-out food.

It's all about self-indulgence and weak thinking.  We can try to pass laws against this sort of thing - the predators just find new ways around them, such as "leasing" secondhand cars .

The shit just never ends.   Your only option is to look out for yourself!
Newer Post Older Post Home