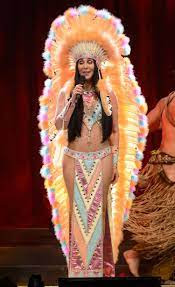 This would be considered so politically incorrect today.  But she does look good in it!


One of the great things about Netflix, is that for less than $10 a month, you can watch programs  - without commercials - and save over $100 a month over the cost of cable.  Not only that, Netflix doesn't induce the compulsive channel-surfing behavior that cable TV does.

If you are on Netflix, you no doubt are aware of the television series "Longmire" which has some good acting, some decent writing, but paper-thin plot lines.  Whatever, it is escapism.  And that is what entertainment is for.

One of the actors is the very underrated Lou Diamond Phillips, who is mostly fillipiino and one-eighth Cherokee (which Cher also claims to be, but in fact, she is Armenian).  Mr. Phillips is a great actor, but he is given the lamest sort of lines by the writers, who think for some reason that Indians can_not say contractions.  So instead of "don't" he says "do not".  As in "I do not think that is wise, Kemosabe!"

The show is basically a reboot of The Lone Ranger with Phillps playing the role of Tonto, updated for a new era.

But it begs the question.  Does it really matter if Mr. Phillips is of Indian ancestry or not?  Being born in the Philippines, I am not sure he has a deep connection with his Cherokee roots.   But apparently in our politically correct age, you have to at least allege such roots in order to wear a headdress or to play an Indian role.

I thought we had moved beyond that.

Crying Eyes Cody claimed to be part Indian, but was actually Sicilian.  Does it matter? He's an actor!
While racial stereotypes can no doubt be offensive, perhaps we take offense too seriously these days.  Every minority group is or was subject to some sort of stereotype humor.  Today, it is only "acceptable" if you are a member of that group.  So Jon Stewart can mock his own Jewishness, and it is OK.  He can also do gay jokes - so long as he is pretending to be gay.  It is, as I noted, the new blackface.

But what is behind all these "cultural" stereotypes, and do these cultural identities really mean anything, or are they are, in fact, partially made-up?

During the recent protests of the pipeline project in North Dakota, National People's Radio has been running appropriately somber pieces where Indians are interviewed - often invoking the great spirit or whatnot and basically feeding the white man that Indian mojo that we all love to lap up.

In case you were late for class, the narrative runs like this:  Indians are more spiritual and somehow better than us because they respected the land and wildlife more than we did.   Yet there is little evidence to point to this.  Native Americans or Indigenous Peoples or whatever - they are and were just like you and me.  They exploited the natural resources of a given area until the resources ran out, and then moved on.

And long before the white man committed cultural and actual genocide (the latter being a whole lot worse) on the Indian tribes, the Indians were slaughtering each other, with great regularity.  As in Western Society, going on the warpath was a form of population control.  They were not especially peace-loving people, despite how they are portrayed today.

When we showed up, our diseases and superior weaponry were no match for bows and arrows.   But many Indians adapted to this new environment - settling down to live in towns, farm, and try to become part of the new civilization that Europeans had brought to the Continent.   Sadly, racism and poor choices of allies sealed their fate.   When Indians in New York State sided with the French, they found themselves on the losing side of a European battle.  When many of them later sided with the British, they were trounced a second time.   After the end of the revolution, most of New York State was "cleared" of Indians in order to make room for new settlers - even though Indians had "settled" in towns and had built up farms just like white settlers.

Sadly, even as Indians tried to adapt to a new reality, the white folks weren't about to let them in to their little club.

What to do with Indians became a real problem.   Massacring them all was one solution - and one applied with regularity.  Putting the pitiful remnants of tribes into inhospitable reservations thousands of miles from their native homes was another.

In later years, attempts were made to wipe out Indian culture itself, by snatching children from Indian tribes and sending them to boarding schools to learn English and Western culture.   Our politically-correct Canadian friends were even more aggressive about this than our ancestors were. "Kill the Indian, save the Man" was the motto.  The net result was an entire generation who had no idea of what their cultural values were, or even their own language.

In the intervening years, attempts have been made to reconstruct these cultures, from memories, documentation, and whatnot.   Indians today arguably have greater cultural values than in the near past.  However, some of this culture is created culture or reconstructed culture which is suspect.  For one Western tribe in Canada, cultural dances are being reconstructed from archival films.

And Indians are not alone in this.  Creating culture is a game any race can play.   When Israel was formed in 1949, Hebrew was chosen as the official language.  The problem was - and is - that Hebrew ceased to be used as a spoken language centuries ago.   While the pronunciation of some words was known, many others had to be reconstructed or invented.

Similarly, in Scotland and Wales, more people today are learning to speak their "native" languages than have in the past.  It is part of a cultural movement to distinguish and separate themselves from British culture.  The funny thing is, of course, that we are talking about regions or countries about the size of the State of New Jersey.  Of course, one could argue New Jersey has its own language and culture as well.

Black culture in America is wholly manufactured.  Yes, some traditions in black families do date to the days of slavery (Juneteenth being one of them).  Other cultural values, such as Kwanzaa or Ebonics were manufactured from whole cloth, or are of recent derivation.

White people are not immune from cultural manufacturing either.  The so-called "Patrician" accent made so famous in the movies of the 40's and by actresses like Katherine Hepburn, is not an accent based on any particular country or culture, but in fact is unique to upper class white Americans in a certain time period in history.  It was created - in part - by the movie industry itself.

Oddly enough, another white cultural value is to claim partial Indian ancestry (my Mother used to do this - it was likely false) as Iron Eyes Cody did.  I guess everyone wants to claim they have some deep spiritual connection to the land or whatnot.  And like with Scottish ancestry, it was cool to be partially Indian, but not wholly so, if you wanted to fit into white society.

And it goes without saying that every "ethnic" group in America will claim to be of true (fill-in-the-blank) ancestry for certain events or parties.   On St. Patrick's day, everyone with an Irish-sounding name will claim to be 100% from County Cork, even if they are sixth-generation American and interbred with five other ethnicities.  On Columbus day (before it became politically incorrect) we are all Italian, of course!

So what is the harm in all of this?

Maybe nothing.  Maybe something.

It just seemed to me that a protest over the location of a pipeline should be based on the merits of the case, not on the ethnicities of the people involved, or whether certain ethnicities have a "more spiritual bond with the land" or whatnot, which is plainly false, if you've every driven through a reservation and seen all the shit on people's lawns - just like outside the reservation.

When I hear an Indian giving the white man that Indian mojo - speaking as if English were a foreign language and blathering on about the spirit of water and snow. I get the feeling we are being snookered here.  It is irrelevant to the underlying issue whether you think you have a more spiritual connection to the land than other people do.

And liberals, particularly on NPR, just eat this shit up.  They want to believe that ethnic groups are somehow more in touch with spirituality, religion, the land, emotions, or whatever.  They want to believe that city-dwelling folk are somehow out of touch with their spiritual side, and only someone growing up in poverty in a trailer park - either on or off the reservation - really understands spiritual matters.

It is a common trope on television and in the movies.  The poor are more noble than us and often have magical powers.   As I noted in an earlier posting, the movie The Green Mile is an example of this, where poor people have spiritual powers by dint of being poor.

I guess that is the booby prize for not being rich.

But sorry, I don't buy into this ho-ho-hokum.   Form as many drum circles as you want, it doesn't make the underlying facts any different.

A map of all the existing oil and gas pipelines in the USA.   I think the Indians are a little late to the game here.
Newer Post Older Post Home