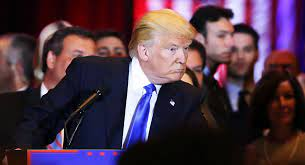 What would a Donald Trump Presidency actually be like?


A lot of folks are nervous that Donald Trump might actually win the election.  Stranger things have happened and stranger people have occupied the White House.   Consider George W. Bush and Dick Cheney.

But what would a Trump Presidency be like?  What would he accomplish?   It turns out, a lot of what he has promised simply wouldn't happen, because of Congress.   Congressional Republicans by and large are conservative in a fiscal sense, and thus are not in favor of doing anything that upsets big business.  "What's good for General Motors is good for America" used to be their mantra - back in the 1960's anyway.

So Congress would likely fail to enact many of the ideas Trump has, into law.   And Trump's policies won't accomplish a lot of the things he says he wants to do.   But there will be some major changes, and that is what has markets spooked.

1.  The Wall:   Mexico won't pay for it, and neither will Congress.   The reason we only have a partial wall right now is that walls are fucking expensive to build and our Southern border is, well, 'Huge" to coin a phrase.   Also, walls that we do have simply don't work.   Immigrants climb them, dig under them, or cut through them.   Build a wall, and you'll need hundreds of thousands of agents to patrol it, night and day.   Congress simply won't digest this cost - at least not a fiscally conservative Congress.

2.   Trade Protectionism:   Republicans (the real kind) are not in favor of tariffs and are in fact in favor of free trade.   So it is doubtful they would enact a 30% import duty on Mexico or China or whatever number Trump has pulled out of his ass during his campaign speeches.   Just ain't gonna happen.

3.  Your job coming back:  If you lost your job in the steel mill or the auto plant, odds are it ain't coming back.   Odds are, you lost your job to automation, not just overseas competition.   While some mills still cold-roll steel, the more efficient plants use a "continuous casting" machine which takes raw materials at one end and puts out rolled sheet metal at the other.  The old days of rolling slabs and then grinding them and then rolling them again and again and then sending them off to another factory to roll them into sheet metal, are long gone.  Even if they came back, the number of workers needed at such plants would be half of what were hired before.

4.  The Supreme Court vacancies:  The Senate needs 60 votes to end debate on a nominee.  It is possible the Democrats could enact revenge on the GOP's stalling on filling the Scalia seat.   Whether they could stall for two years (mid-term elections) remains to be seen.

1.  If he can get justices appointed to the Supreme Court, it is possible that things like Roe v. Wade or the legalization of gay marriage could be overturned.   This remains to be seen.  Again, the Democrats could try to throw a wrench in the works, which seems to be our new form of government.  They started it.

2.  Obamacare will be repealed - and nothing will likely replace it.   The GOP will move for another vote to repeal Obamacare and this time succeed.   Problem is, of course, the insurance companies will keep their premiums at their present sky-high rates, but our tax credit will evaporate.   We'll be screwed.

3.  The stock market will tank 5% the day after the election, and the economy may dip into recession.   We are due for a recession at this point anyway, and this could precipitate it.   If for some bizarre reason he does get protectionist measures through Congress, the spending power of your savings will evaporate with inflation and a prolonged recession will result.

4.  Intolerance will increase:  Just as after the Brexit vote, racists and bigots felt emboldened and validated, we saw, prior to the election, increased incidents of racism, including assaults and even murder (one fellow shot a Sikh, thinking he was "Muslim" and said he was doing his patriotic duty).  Trump has brought racism and intolerance out of the closet.

5.  Things like the Bureau of Consumer Protection will be abolished or neutered, and regulations on things like the payday loan industry will be slackened if not outright abolished.   For-profit Colleges?  Back in business, baby!  Remember that Trump actually ran one.   Agencies like NOAA who investigate global warming will have their budgets cut.   The Executive branch has a lot of discretion on enforcement of laws.

6.  Legal marijuana will go away:  While Trump has supported medical marijuana, he said that Colorado's legalization of pot is "a real problem".   One phone call to the DEA could put a lot of people in jail overnight.  What is odd to me is that Florida just legalized medical marijuana by overwhelming numbers, but also voted for Trump.

7. People will be deported:  This is nothing new, the Obama administration has deported record numbers of people over the years.   I doubt that Trump will be able to set up his national deportation Gestapo as he promised.   But there will likely be more harassment of people who appear "foreign" that we are already doing.   I mentioned before about my Cuban friend who was threatened with jail by an ignorant redneck Sheriff's deputy who didn't understand that a US Passport was indeed "proof of citizenship".  And the good old State of Alabama has detained and jailed executives from Mercedes who were there visiting their plant, when they could not produce sufficient ID to satisfy local cops.   Expect that sort of thing to increase.

8.  America's stature in the world is diminished:  The mere nomination of Trump has made us a laughing stock of the world.   The only world leaders to endorse him have been brutal dictators like Putin and Kim Jong Un.   That sort of says it all.   It is part of the new fascism I wrote about - people seem to want authoritarian leaders in an uncertain time.  And Trump fits that sort of mold.

* * *
Will a Trump Presidency be the end of the world?  Perhaps not.  Will it be the end of America?   Well, it could spell hard times for a lot of people - including the folks who voted for him on the premise that "times are hard" right now.   They will look back on the Obama era as the "good old days".

Of course, I am kidding.  When the economy goes in the shitter, they will blame Obama for it retroactively, just as they blamed him for the economic crash of 2008 which occurred under Bush's watch.   Hell, they tried to pin the Real Estate Meltdown on Bill Clinton, who had been out of office for eight years.

People believe what they want to believe.

But in two years, there will be mid-term elections.   And it may be that both parties do a lot of soul-searching and figure out why they got to be where they are.

And in four years, there will be another Presidential election, and maybe this time around, the parties will figure out in advance some decent candidates to nominate, instead of leaving it all to the chaos of the primary process.
UPDATE 2021:  I got most of it right.  I'm glad I was wrong about Obamacare being abolished.  Also, the Supreme Court has shown itself not to be a lackey of anyone.
Newer Post Older Post Home