The Changing Nature of Government Employment 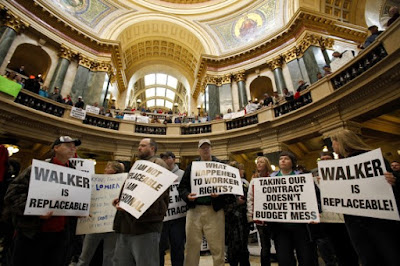 And I have to say, it is one area where I may agree with "The Donald".   Historically, working in government, whether at the Federal, State, or local levels, was never a really great deal.   The pay was usually lower than in the private sector, but the benefits were usually comparable if not somewhat better.   If you stayed there long enough (20-30 years or so) you could retire with a nice pension - not a rich man's pension, but a comfortable one.

When I went to work at the Patent Office on July 22, 1987, it was for the princely sum of $22,000 a year as a GS-7-1220.   This was actually more money that a standard GS-7 would make, as they had to sweeten the pot to attract employees.  They also had to jump through hoops to allow employees to jump to GS-9 level after six months, making (as I recall) $25,000 a year.  Now bear in mind that rent on a basic apartment back then was $900 a month and you can see it was tough to make ends meet.

Now, granted, if I had stayed at the Patent Office, eventually I would have retired with a nice pension (if I was under the old FERS plan) and in my later years would have had an astounding eight weeks of vacation a year plus paid sick days.   Some Examiners "saved up" sick days over the years and when they retired, got a lump sum check for all those days - paid at their final salary level.   So there were perks to working there.  And in the right Art Unit, with the right quota, it could be a fairly easy job - and certainly risk-free.   You'd have to really screw up to be fired from there.  And you certainly never worried about being sued!

After two years, I was a GS-11, making $32,000 a year, or maybe what a starting Engineer would have made in the private sector.   I left that year to work for a law firm, making $52,000 a year - with full benefits, of course.   Back then, the private sector paid more than the public sector.

Somewhere along the way, that changed - it flipped.  Today, working for the government is far more attractive that working in the private sector.   And two trends created this flip.

First, our economy became more competitive on a global scale.   Labor has to compete with labor from overseas.   Companies have to cut costs to survive.   Extensive benefits were the first to go.  Then people were put on part-time to cut out benefits entirely.   Employees were made "contractors" so they had to pay their own 18% self-employment tax plus fund their own retirement and health care.

Working in the private sector really started to suck - big time.   Unless you were at the top of the heap, chances are, you made less than someone at the Post Office.

At the same time, public sector unions got more bold.  They went out on strike (at the State level, anyway, this is forbidden at the Federal level, as air traffic controllers discovered) and demanded more money.  They promulgated the myth of the "underpaid teacher" and people signed on to pay them more.  They made saints out of our "first responders" and lavished them with higher pay and benefits as well.  Who will say "no" to a brave fireman or police officer - particularly during an election year?

In some instances, the union members ended up on the City Council and then awarded themselves huge salaries, bankrupting the city in the process. All perfectly legal, too - at least for the employees.  The politicians, well, they went to jail.

Most ordinary folks avoid local politics and only realized that "something was wrong" when they got a $10,000 property tax bill on a modest house.   School teachers were making six-figure salaries and retiring with $75,000-a-year pensions, sometimes (State) tax-free.    It is not that these people were worth nothing, but their salaries and benefits were starting to become obscene relative to their job description.

Government employees were being paid more than private sector employees - and this was a first for our nation.

Now granted, this is not necessarily the case everywhere in the nation.   Some school districts still pay their employees squat.  Some municipal workers don't earn much.   But in most cases, it is very hard to get fired from a public-sector job, and retirement benefits are still pretty cushy.

In addition to high property tax bills, these outrageous salaries and pensions have resulted in many municipalities struggling to make ends meet.   In Alabama, a small town stopped paying pensions entirely.    CALPERS, the California pension plan, is in real trouble, and many small towns who bought into it are finding it is hard to get out of it.   There is already talk that pensions may be cut.

Even prosperous Dallas, Texas is going bankrupt.  And the reason is not hard to understand - they promised huge benefits (a guaranteed 8.5% return) to public sector employees.  To achieve that rate of return, they invested in risky ventures which backfired.  A better approach would have been to offer a normal pension plan that could be realistically funded.

The reason for these huge raises and pensions is often given as "retention" - we are told that police, firefighters, teachers, and municipal workers will all flee at a moment's notice unless they are paid more money.   But where will they flee to?  Another bankrupt city?  The reality is, lazy management and government doesn't want to stage a confrontation with unions and public sector employees.   They perceive the voters as coming down on the side of the employees, which they will, until they get their property tax bill.

A few in government had the balls to take on the unions.  Governor Scott Walker of Wisconsin took on the public sector unions and won.   The unions tried to organize a recall vote, but failed to realize that while there are a lot of public sector employees in Wisconsin, there are far more property tax payers and that tax payers, even if sympathetic to the employees, are also sympathetic to their own pocketbooks.   When a grade-school teacher is making more money than you are, and you can barely afford to make ends meet, sympathy for the unions evaporates.   And let's face it, there is so much waste and abuse in public sector hiring - which is one reason so many jobs are being outsourced to contractors.

Sadly, the Democrats didn't do the math on this.  Worse yet, they failed to learn a lesson from the Wisconsin debacle.  Governor Walker was re-elected and his support, if anything, was strengthened and union influence was weakened.   Today they are still counting votes in Wisconsin, but it appears Trump may win in that State by a whisker.   The Democrats failed to read the tea leaves and see that they had a taxpayer revolt on their hands.  When property taxes literally price you out of your home, people lose sympathy for six-figure-salary public sector workers.

And that is the real issue right there.  Government workers are hardly exploited as sweatshop employees or assembly line workers in the 1930's.   We are not talking about abusive conditions or horrific work environments.   Rather, what they are striking for is simply more money and better benefits which is fine and all, but the rest of us don't have it as nice and moreover can't afford to pay these folks.

And that right there is maybe why Trump won these swing States.   The "blue states" that went for Hillary, particularly California, New York, and New Jersey, all have horrendous tax rates, both State and local, as well as highly paid public sector employees.   While these public sector employees end up as reliable voters for the Democrats, unless the government becomes the employer of a majority of people, their votes cannot carry the day.

And that is the deal right there, isn't it?  Republicans worry that if enough people are on some form or public assistance or are employed by the government, our nation may turn into a one-party system.   Once a majority of people are suckling at the government teat, they will have no incentive to vote for anything else other than "more for me, please!"