Is Global Warming a Hoax? No. Does the Media Exaggerate It? Yes. 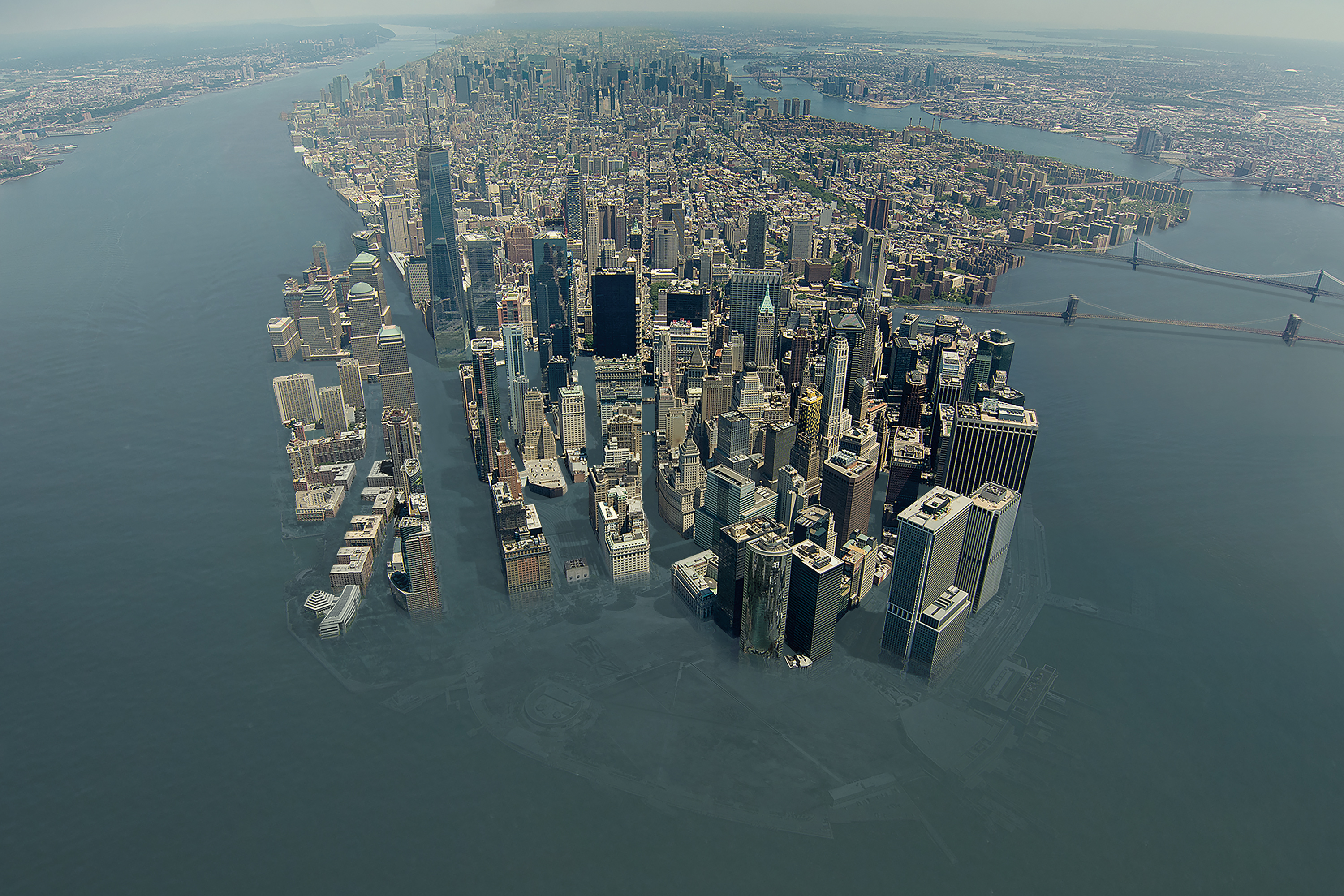 While sea levels are rising, reports of Manhattan being flooded in a decade or two are a little overstated.

One of the contentious issues of the last election was global warming.  Just as most Republicans stopped denying global warming existed (and that the moon landing was faked) Donald Trump "went there" by tweeting that global warming was a hoax perpetuated by China to put us at a strategic disadvantage in global trade.

China, ironically, is the largest consumer of coal but also the largest producer of solar panels.   They are well aware of the dangers of smog and pollution, as their cities are choked with bad air.  Thus, while they are responsible for a huge portion of the CO2 problem in the atmosphere, they may be the first to help solve it, by making solar panels cheap and affordable.

But is global warming being used as a trade leverage?  Maybe.   In many climate agreements, third world or "developing" countries (including China and India) are or were given a pass on emissions standards on the grounds that they are still developing economically.  In a way, it gives them a free pass to pollute while we have to spend extra dollars to find new ways to eliminate pollution.

And despite claims that there are ways to eliminate CO2 emissions, it basically isn't possible to do.  When you combust anything you produce carbon dioxide.  That is the basic equation:  C + O2 => CO2 + energy.  There are few exceptions, such as Hydrogen, which if combusted efficiently, produces only water.   But the problem with hydrogen is that most of it is made from fossil fuels, as "splitting" it from water using electrolysis is costly in energy terms.

So there is no easy out on carbon dioxide, other than nuclear power, hydroelectric power, wind power, or solar power - each with its own problems and detractors (The Donald says wind turbines spoil the view from his golf course!).

In the past, I have done some work for NOAA and talked with some of the scientists there.  As an Engineer and Lawyer, trained to study "just the facts" I am convinced their methodology is accurate and their results are valid.   Human activity, which covers the planet, is slowly warming it.   We have an impact on our atmosphere, which is only a thin layer of gases covering the planet only a few miles thick.

But the media, as usual, wants a sensational story.   Telling people that water levels may rise, on average, an inch or so a decade, isn't selling newspapers or eyeballs.   Instead, you have to tell them that Pacific Islanders are up and moving already as their islands are already underwater!   For some reason, an island several feet above sea level is underwater due to a 1" rise in ocean levels.  Or maybe not precisely.  In order to capture attention, you have to tell them that their vacation homes will be gone tomorrow, along with every coastal city in existence.

It is a bit of exaggeration, and it doesn't help the global warming debate one iota.  Because when these exaggerated outcomes don't materialize then people may conclude that the whole thing was a hoax - which it wasn't.

The reality of rising sea levels is that sea levels are rising, but not as fast as the media says they are.

Global sea level has been rising at an increasing rate since the 20th century. Analysis of a global network of tide gauge records shows that sea level has been rising at the rate of about 0.6 inches per decade since 1900. Since 1992, satellite altimeters indicate that the rate of rise has increased to 1.2 inches per decade—a significantly larger rate than at any other time over the last 2000 years. In the next several decades, continued sea level rise and land subsidence will cause tidal flood frequencies to rapidly increase due to typical storm surges and high tides in many coastal regions.

In other words, sea levels have been rising, but the rate of rise has nearly doubled.   In 100 years, at the present rate, levels may rise by a foot.

This may not sound like a lot, but for folks living only a few feet above sea level, this may mean that a super-high tide, accompanied by a storm surge, could flood their home, as opposed to merely crawling up the sidewalk.

And it makes a difference, too.  During the recent hurricane evacuation, we thought about this.  Even an inch of muddy salt water in your home can cost tens of thousands of dollars in damage.   Goodbye engineered hardwood floors and carpets, for starters.  If the water enters the walls and "wicks" up the insulation, it could mean re-sheetrocking your home.

We visited such a home in the Keys many years back, after a hurricane.  It was for sale and on a canal, and not more than a few feet above water level.  Inside the home, you could see where the homeowners had cut the sheet rock about a foot from the floor, patched it, and then put in new baseboard molding.  The problem was, when you entered the house, the smell of mildew hit you like a wave.  I am not sure the house was safe to live in!  And at the prices they wanted back then (pre-2008) it was certainly no bargain.

But in my lifetime, sea level rise isn't going to be much of an issue.  Yes, that sounds selfish, but that is just a statement of fact.  Another 4.5 inches over the next 30 years isn't going to make much of a difference to me.   For the next generation, maybe more so, and the generation after that, it may be a real issue.

But permanent sea level rises of 5-10 feet would be centuries away.  New York City isn't about to become the next Venice anytime soon.

But tell that to the New York Times.  Over the weekend they ran a fear piece that seashore properties are no longer selling as people are fleeing for higher ground.   A few skewed graphics (and scary hurricane photos) and some alarmist text (accompanied by conjecture) makes it seem like Miami beach is already under three feet of water.  This isn't the case.

The narrative is flawed, as are the statistics.  Consider this graphic and accompanying text: 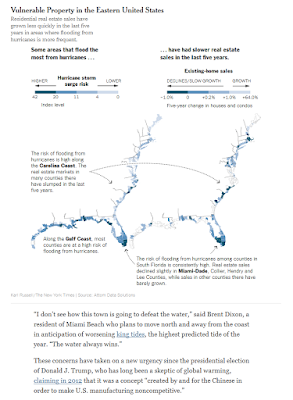 Look at the scales on this chart - they are extremely non-linear.  Click to enlarge.

The premise is that people are "fleeing" coastal properties and that sales are plummeting.   But if you look at the scale of the graph, the most negative areas are minus 1% while the most positive are a whopping PLUS 64%.  For some reason, the extremes of the scale are clearly lopsided.

The article goes on to state that the cost of flood insurance is making it hard to sell some homes.   And this is true - for homes built on the ground in flood zones.   People who wisely built on stilts find their flood insurance premiums far less.

It also illustrates the folly of building a mansion in a flood zone.   In years gone by, people built modest homes or "camps" by the water.  If your beach shack on Cape Cod blew away in a storm, no one much really cared - you simply built a new one.   Today, people build expensive "look at me!" houses right on the water and wonder why they cost over $10,000 to insure.

The answer is, don't build a monument to yourself on the water.   Or, if you are like me, pay cash for a waterfront home.   Does this mean that prices are adjusted accordingly?   Well, sure.   But most retirement homes in Florida, historically, were never mortgaged.   As I noted many years back, the rationale for living in Florida has somewhat evaporated.

Back in the 1960's and 1970's, you could sell your home "up North" for a lot of money and for half as much, own a nice house near the beach in Florida, with low property taxes, low insurance, and no income tax.   Since you paid cash for the house, you weren't too concerned with flood insurance.

Today, if you sell your house "up North" you can expect to pay double for a comparable house in Florida - and pay sky-high property taxes, unless you move to an inland area such as The Villages, which may explain why that area is growing rapidly.

The rest of the article is full of pablum and emotional thinking.  One homeowner on the Outer Banks (which have been hammered by hurricanes long before the white man set foot in North America!) laments that his house will eventually be washed away and "my grandkids will never experience it!"   But of course in the same breath, he laments his flood insurance premiums - which means FEMA will build him a new house, on stilts, for his grandkids to enjoy.

The New York Times article is flawed in that it reports a trend that really isn't happening.  A 1% drop in sales in some selected areas is hardly indicative of an overall trend.   Emotional quotes and vague paragraphs about how banks "should study the phenomenon of global warming" really aren't much of a story, so much as they are conjecture and click-baiting.

We expect more from the grey lady - the "newspaper of record".

So is global warming a hoax?  No, of course not.  The climate is changing, and a lot of this is due to our activities in burning fossil fuels.   Will we all be wearing hip waders in 20 years?  No, it isn't changing quite that fast, but fast enough that in the next 100 years, the architecture and construction techniques used in coastal communities will undoubtedly change.