Is Nestlé Stealing Our Water? Not Exactly... 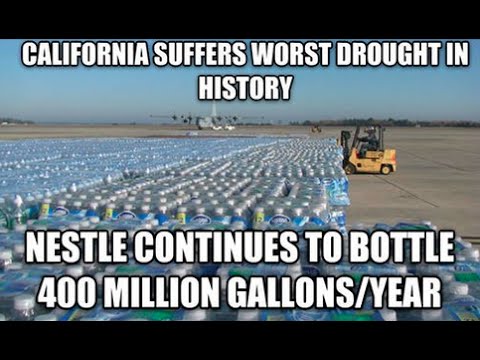 For some reason, it is not OK for Nestlé to use tap water to make its products, but it is perfectly OK for Coca-Cola to do the same - or the local brewery.


In whiny on-line articles, left-wingers argue that Nestlé is "stealing water" from the American public.  These are the sort of articles than handed the Presidency to Donald Trump - they are mindless left-wing bullshit that makes Liberalism look bad.

And "Liberal" isn't a dirty word, but one has to wonder if some of the more extreme versions of it are not in fact financed by the far-right to discredit Liberalism in general.

Nestlé isn't in fact "stealing" water from anyone, but as the article cited above even admits, is buying water from a public water utility for 65 cents for every 470 gallons, and using it to make bottled water.   Some folks think this is outrageous - that every bottle of bottled water should come from some quaintly named spring high up in the Rocky Mountains.  But the reality of bottled water is, it is usually just tap water or well water, sent through a reverse-osmosis system (which purifies it to basically distilled water) with minerals added (because distilled water tastes like crap).

It is a manufactured product like any other beverage.   It is no different from Coca-Cola, who takes tap water (or well water), purifies it, adds High Fructose Corn Syrup and their "Secret Ingredients" and sells it back to the public at a profit.

Oh, and yes, Coca-Cola also takes tap water or well water and purifies it and sells it as bottled water (the Dasani brand), which for some reason is OK, but not OK for Nestlé.

Or take your local brewer.   They use enormous amounts of water, and in most local breweries, this is local municipal (tap) water that they buy, just like you and I do, for so many cents per thousand gallons.  For some reason, no one is protesting the local brewery or Coca-Cola bottling plant, but they are protesting Nestlé.

Or take your local chemical factory, or car assembly plant, or, well, just about any other industrial concern.   Odds are, they are using millions of gallons of water a year, which they buy from the local municipality, and for which they pay the going rates.   Is it an "outrage" they are using so much water?   Would you rather they close the factory and lay off all the workers? The idea of buying bottled water, as I have noted before, is somewhat perverse.


Maybe what really angers these moonbats is the idea that companies are selling what once was free and an inalienable right - or so we thought, anyway.   When I was growing up in the 1960's, the only "bottled water" sold was maybe Perrier, and even that had to be obtained from some specialty store.  We made do with drinking fountains, which every business had at least one of.  A drink wasn't something you paid for, but something that you felt entitled to.

The fad of "bottled water" took off in the late 1970's and early 1980's and it was a status thing, particularly among fitness buffs who would slake their thirst with designer labels and look down their noses at people slurping from the public fountain.  And over time, it took off, until the point where I found myself buying water at gas stations for $1.65 a bottle.  I put a stop to that pretty quickly.

When traveling, we do use "purified" bottled water in our camper on occasion.  When you travel, your intestines are not used to new bacteria, and the constant changing mix of local water can cause, well, problems. "Montezuma's revenge" is not limited to Mexico, but to any water supply you are not familiar with or immune to.

But a case of bottled water at Wal-Mart is only about $3-$4, so it isn't going to break the bank.  Paying half as much for one bottle is.

But it seems the looney left is upset at Nestlé for a number of reasons.   There was the bru-ha-ha about Nestlé pushing infant formula to third world mothers as being "better" for babies.   That was the case in the USA in the 1930's and 1940's, when it was deemed "more hygienic" than breast feeding.   But a lot of people pushed back on this. The La Leche league was formed to promote breast feeding.  And people like my Mother opted to breast feed, although I am not sure if it is "healthy" for a baby to be breast feeding while Mom is sipping a martini.

The point is, people changed their habits, to the point where today it is more common to breast-feed than not, despite any "corporate influence" to the contrary. We are in control of our own destiny, provided we choose not to be mindless drones who believe everything advertised on the TeeVee.

But there are occasions where both infant formula and bottled water are useful products.  If you leave your baby with a sitter, she can't necessarily feed the kid breast milk, unless you left some in the fridge.  If you spend the weekend at Burning Man, you might want to bring a case of bottled water, or spend hours purifying water at home and putting it in containers - your choice.

But to say that bottling water is somehow inherently evil makes no sense.  What makes even less sense is to single out one company as being "bad" for doing this, while giving others a free pass.  And this is particularly egregious when other companies, such as Coca-Cola went out of their way to promote soft drinks and bottled water as alternatives to tap water.

Bottling water is just another industrial process, no different than bottling soft drinks or making beer.  If you think this is an overpriced product then don't buy it - it is as simple as that.

But to say that a company is "stealing" water when they are actually paying for it is just utter nonsense.

And to target one company as being bad, while giving all others a free pass is just liberal gibberish.

It is all part of this mindless corporate-hate that seems to infect left-wing America, who loves to find any reason - real or imagined - to hate Wal-Mart, McDonald's, General Motors, or whoever is the whipping-boy du jour. But don't look too closely in the back seat of their Chevy - you'll see old McDonald's wrappers obscured by a pile of Wal-Mart plastic shopping bags!

This is the sort of nonsense that the rest of America is fed up with.  By itself, it is not enough to sway an election, but in combination with a lot of other nonsense, it is enough for people to turn away from the Democratic party as being out of touch with reality.

P.S. - Note that the "meme" above quotes 400 million gallons of water, where the article cited claims 80 million gallons.  I suspect neither number is accurate - the Bureau of Specious Statistics strikes again!

UPDATE:  The outrage du jour about Nestlé has moved to Michigan, where a meme (always the best source of hard facts!) claims that Nestlé is stealing millions of gallons of groundwater for only $200 - the cost of a permit fee.  However, if Nestlé has a ground well, they can legally pump water from it, and Michigan is hardly going though a drought condition.

Moreover, again, we are not told why it is "outrageous" that Nestlé does this but not outrageous that Coca-Cola, local brewers, or even car factories in Michigan go through millions of gallons of water a year.

For some folks on the far left, they have a grudge against Nestlé.  Oh, wait.  Maybe this is part of an overall Union Propaganda Campaign?

I'm just guessing, but these horrific things that Nestlé is doing will suddenly be just fine, once the last plant is unionized.

"Nice bottling plant ya got here.  Shame if something happened to it......"
Newer Post Older Post Home