Fix or Throw Away? 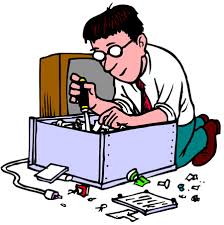 Is it better to repair or replace?


I was recently asked for my opinion about a new Swedish tax provision which provides tax breaks for people who fix things, as opposed to throwing them away and buying anew.

For some this is a validation of their beliefs that we can improve our environment and our economy and put people back to work by mending older things as opposed to tossing stuff away in our "throwaway culture".

The underlying premise, of course, is that we in the West are awful, decadent people who are wasteful and are destroying the world.   After all, that rotting meat in the dumpster behind the restaurant could feed five homeless people!   And France has recently enacted a law preventing restaurants from throwing away any food at all.   All I can say is, stay away from the Tuesday dinner special.
UPDATE:  The French found an end-run on this new law.  They simply wrap up leftovers and force you to take them home, American-style.  It is gross and unsafe, to be eating food that was in the trunk of your car, at room temperature, for hours.  That's the problem with these laws - unintended consequences!

Are we a wasteful, "throwaway" culture?  Perhaps.  But perhaps human beings have always been.   If you look in any museum or historical site, you will be amazed at the array of goods that archaeologists and historians found, simply by digging in the ground.  Our ancestors threw away broken dishes and whatnot, simply because it wasn't worthwhile or even possible to fix them.  Our ancestors literally lived on a pile of their garbage, which is one reason why ancient cities are buried beneath present-day ones.
But what about the Indians?  Native Americans were in touch with the land and never abused Mother Nature, right?   Well, it is a nice fantasy, but the reality is, they are pretty much like us evil Westerners. We visited one Indian site near Charleston where they had made a mound of oyster shells over 50 feet high.  The Indians pulled oysters out of the river, roasted them, and then threw the shells in a big pile, until it was a small mountain.  Today, we would "recycle" these shells to seed new oyster beds, particularly as the levels of calcium in the ocean declines.

Other "Native Americans" would settle in one area and then exploit the natural resources until they were exhausted - and then move on to more fertile territory.   The idea that certain peoples or races are more respectful of Mother Nature is something of a fraud.

But getting back to the main point, is it better to replace or repair?  A friend of mine harbors quaint notions in this regard.  "Mummy will send this to the man in town who will mend it!" she says.  Apparently the mending-man can fix anything, although usually the things he fixes are never quite the same as new.

And that is the problem with "mending" things.  Whenever you try to repair something, the end result is inevitably less than the item as-new.  Just taking things apart often breaks stuff.  You unscrew a bolt, and you've made the threads that much looser.  Odds are, you may strip out one bolt entirely.  For things like trim pieces, small clips and screws are always getting broken - and often left out of the reassembly, as the cost and labor of chasing down every last screw is atrocious.

You can weld to metal, but you affect the crystal structure of the material when you do so.  And you can only weld a piece of metal so many times until it is more weld than metal.

The big problem, of course, is that the incremental cost of repair far exceeds the cost of buying anew.   Let me explain what I mean.

When I was a kid back in the 1960's, we used to drive down route 81 in Pennsylvania as I recall.  There was a junkyard there that went on for more than a mile - covering two adjacent hillsides.  For as far as the eye could see, there were junked cars parked. Today, I think it is gone. Today, junked cars are quickly stripped of any usable parts and then crushed and recycled - as they should be.

As a kid, though, the junkyard fascinated me.  "Gee, Dad," I said, "There must be enough parts lying around there to build a whole bunch of cars!"  And indeed there was - there were enough junked 1965 Chevies there to assemble at least a few complete cars.   My Dad gently explained to me that the labor cost of taking all those parts and then reassembling them one at a time, by hand, would be far more than the cost of simply buying a car new at the dealer.  And the half-worn parts would not provide the service life of new ones.

And he was right.  Unless you are building a hobby car or restoring a classic, the cost of hand-building a car far exceeds the cost of building one on an assembly line.   Even then, with classic cars, the resale value when you are done is often "half what you have into it."   Only poor people think you can make money restoring older cars.   Well, yes, you can make money if someone pays you to restore a car, but the guy who pays ends up with 50 cents on the dollar most of the time.

Now of course, it is often "worthwhile" to repair an item if it still has some useful life left.  If your car needs new tires and it looks like it might go another 20,000-50,000 miles before it will be scrapped, then by all means, buy a new set.  But not a series of used ones, please!   But over time, the cost of repairs starts to add up and accelerate, and eventually you hit that point in the Weibull Curve where you are just throwing money away.

From an economic standpoint, as well as an environmental one, it makes sense at that point to junk the equipment and start over.  You'd spend more money, more energy, and waste more resources, trying to fix something old than simply buying anew - after a certain point.   Where that point is, of course, up for debate.

The short answer is, it is far more "efficient" to build something new on an assembly line than to repair it again and again, piecemeal, over time.  More efficient in terms of labor, materials, cost, and the environment.

Of course, the other real issue is obsolescence of technology. I sold one of my old BMWs not because it was entirely worn out but because it was obsolete. The navigation system relied on CDs and also had a cassette deck.  It barely had a cell phone interface, much less Bluetooth.  People today expect these sort of things in modern cars. With the advent of self-driving cars, I think you will see a lot of older vehicles leave the road, and this is not necessarily a bad thing. Also, older cars tend to pollute a lot more so it's better for the environment if people replace them with newer and more efficient and less polluting vehicles. The urge to save things is fine, but sometimes it is better to move on.

Other items simply cannot be repaired. While old-fashioned leather shoes could be taken to the "cobbler" to have new soles and heels installed (as I used to do when I worked at the Patent Office), modern sneakers and walking shoes are made of expanded polyurethane rubber, molded into one piece.  Not only can they not be repaired once they come unglued from the uppers, they largely are worn out at that point, as the polyurethane has compressed permanently and the shoes offer no support.

Of course for historic structures or vehicles, sometimes the cost-benefit analysis doesn't apply. And I'm sure Sweden has more historical structures than we do here in the United States.  Many of my European and Asian friends are amazed that in America we tend to throw things away or tear things down on a regular basis. When I went to visit Japan I noticed a lot of older buildings from the 1950's which were still standing which were kept in immaculate condition. In America usually an office building is torn down after 30 to 40 years. The cost of repair often exceeds the cost of replacement.  But in addition to wear and tear, sometimes a building outlives its usefulness and cannot be adapted to a new use.  In that case, it makes more economic sense to tear it down and start over.

Note that the law in Sweden addressed the VAT tax, which is less of an issue in the USA. The Value-Added Tax, or VAT is a huge tax slapped on the price of goods and services in most European countries. The proposed law in Sweden simply halves this tax for repair costs, and also allows the owner to deduct the income taxes paid by the repairman for labor incurred for the repair (how this is calculated is anyone's guess, it must be a bit of an accounting nightmare).
UPDATE:  My neighbor in Pompano worked with an SAS pilot rebuilding old SeaRay boats.  They would find a boat with a good hull, and tear out the gas engines and replace them with diesels from scrapped Navy landing craft.  They would reupholster the interiors and put new canvas on them and ship them to Sweden on container ships - and double their money.  The VAT tax made buying a rebuilt used boat from America cheaper than buying a new boat from Sweden.  Again, unintended consequences - which hurt the Swedish boat industry but helped a few lucky people in South Florida!

I'm guessing the Swedes feel that repairing older things is more environmentally correct than merely replacing. However I wonder if they are considering the overall cost in terms of dollars as well as the environment impact of  incremental repairing machinery and buildings. Eventually there reaches a point on the Weibull curve where is cheaper to replace than to repair. Sadly, laws like this are implemented by Politicians and not Engineers.

The wonderful thing is, of course, that we can see how such a tax strategy works out and whether it is advantageous. If it does provide some benefit to society, then maybe other countries will adopt it. If it turns out to be a boondoggle, maybe let it slide - sort of like this "guaranteed minimum income" craziness that is sweeping Europe at the moment.

Recently, one of my computers again crashed.  It appears the video card again went South.  I can buy a used video card on eBay for a few bucks and maybe get the machine to work again.   But the machine is almost a decade old, which is a lifetime in the computer world. Is it worth my time and effort to troubleshoot and repair a machine that might have a useful service life of only a year or two?   A machine that is already woefully obsolete?

That indeed, is the question.
UPDATE 2020:  I bought a used graphics card on eBay from some gamer who wanted to upgrade to a faster card.  Works for me!  But eventually the motherboard went South so into the trash it went.  Today, we have two hoard old Toshiba laptops (new hard drives, new memory, new keyboard) which seem to work fine with Windows 7 Ultimate.  But I can see a day - not too far in the future - when we will break down and buy a new Windows 10 machine for $300 at the wholesale club....