Will Trump Be Impeached? Why the Media Gets It All Wrong 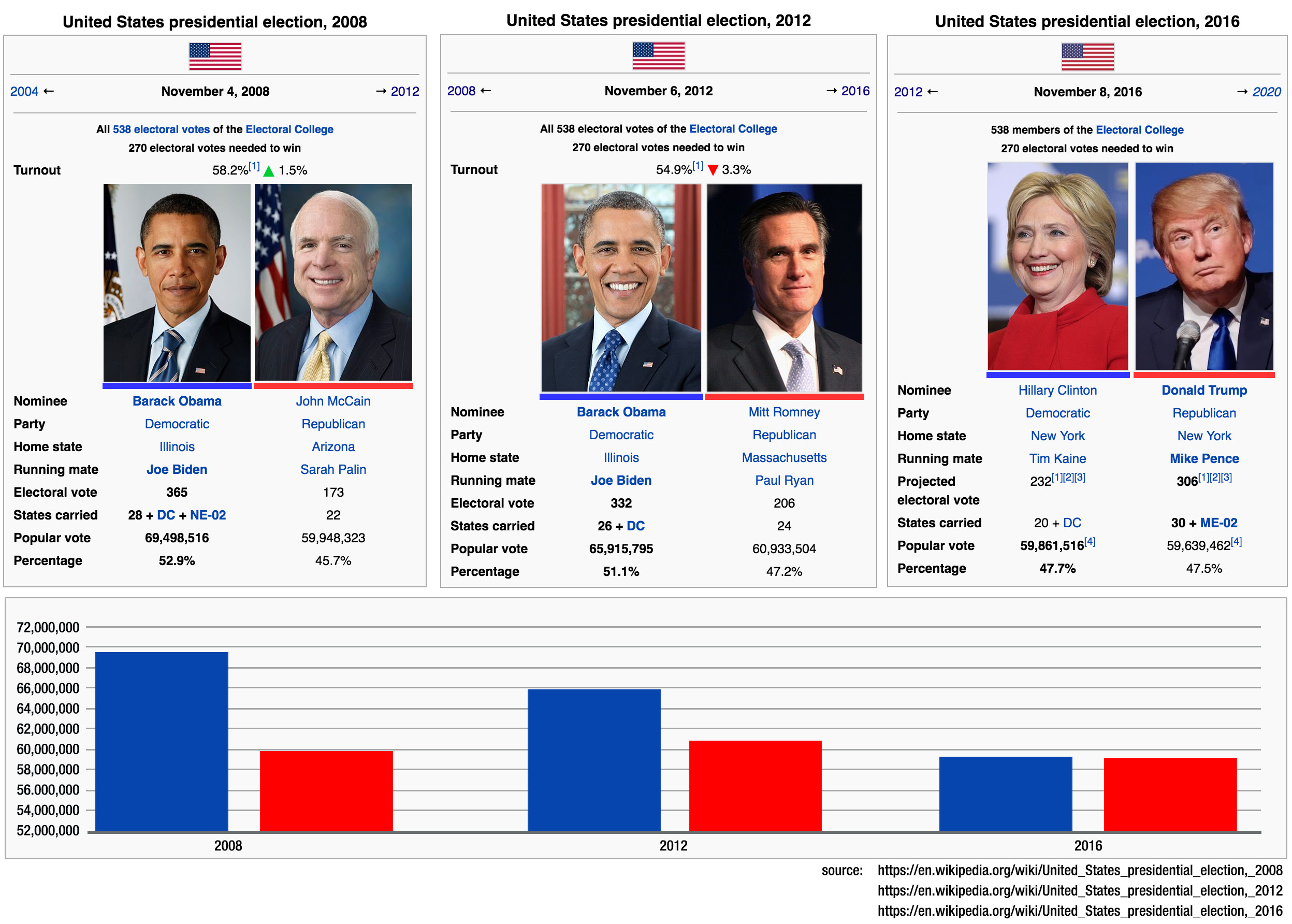 Trump has yet to be inaugurated and some are already speculating he will be impeached.

The media stubbornly refuses to accept reality.   In article after article and in talk show after talk show, prognosticators on both the Left and Right are proclaiming that Trump's "victory" is a sign of a "wave" of voter frustration and an uprising of a new, scary, far-right GOP.

Pundits on the Left use the Trump victory as a boogeyman to scare liberals into thinking that the "flyover States" are chock full lesbian-hating racist Klan members who are set to take over the country.

Pundits on the Right are talking about a "landslide victory" and a "mandate from the voters" that Trump has achieved.

Nothing, repeat nothing could be further from the truth.

Hillary Clinton, like Al Gore, actually won the popular vote. And even in the electoral college, the margins were razor thin - three states were "won" by margins of 1% or less.   This is hardly a landslide or a mandate.

It is also worth noting that the turnout for Trump was about the same as for Mitt Romney, which is sure to disappoint Mitt Romney.  The real cause of Hillary's defeat was that Democratic voter turnout has been declining almost linearly since 2008 when Obama was elected.

The above chart from "data is beautiful" illustrates this trend.  Click to enlarge.  Obama had a huge turnout in 2008 as people were upset about the economy crashing.  You may recall that Bush had to push through a bank bailout bill to prevent the economy from cratering and that gas was over $5 a gallon in California.   People were losing jobs and factories closing.  GM and Chrysler went bankrupt.   It was a scary time.

Compounding this, the first black candidate for President was running, and blacks were willing to stand in very long lines for hours just to vote on this historic occasion.   In the 2012 election, there was still enthusiasm, but not nearly as much, as the chart illustrates.  (Note the 0-point on the Y-axis is offset, which exaggerates the ratio of voters - the Democrats did NOT win by 2-to-1 in 2008!).

In the 2016 election, well, Hillary screwed up by not even visiting Wisconsin which was a swing State, and not having an effective "get out the vote" ground game in Pennsylvania, Michigan, and Wisconsin.   A few thousand votes in each state would have turned the tide.

So this election is less of a "rise of the far right" than the "we don't give a darn" of the left.   People just didn't get excited about Hillary, and in part that was due to her organization (Hillaryland, an echo chamber) as well as the charisma of the candidate (sorry, Hillary!).

And the evidence for this is in the past elections she has run in.   In 2008 she called herself the "presumptive nominee" and they took a huge lead and pissed it away thanks to a far-left "Hillaryland" group of insiders who failed to generate enthusiasm among the voters, who they viewed with disdain.   Any dissent was squashed quickly and as a result, she failed to get any good advice from outside her inner circle.

The scenario almost repeated itself again during the primaries in 2016.   In what should have been a cake-walk, Hillary had to fight off a vicious attack from someone who was not even in her party.   Bernie Sanders - a whack-job Socialist who has never held any job whatsoever other than "government official" actually had a chance to hijack the nomination.   That should have been a warning right there.

Even after the nomination was secured, there were miss-steps and unfortunate word choices in what should have been a blow-out campaign.  Again, a few votes in three States could have turned the tide.  Instead, the campaign ended up chasing its tail and generating more bad press than good.   It says a lot when you lose to Donald Trump.

If you are contemplating running for office, I would not recommend John Podesta as a campaign chairman.  Just a thought.

So the media is all wrong on this.  There is no "rising tide of right-wing sentiment" or a "mandate" for Trump.  Rather, the number of GOP voters is fairly consistent over the last three elections, and the Democrats failed to get their base to vote.   There were no "Reagan Democrats" crossing party lines to elect a Republican.  There is no groundswell of support for racism or xenophobia.   It is a nice narrative to sell newspapers, but it is utterly false.

And sadly, these false narratives are what turned the election in the first place.   All this talk of a "landslide victory" for Hillary is one big reason a lot of people simply failed to vote.  And I suspect that a lot of these non-voters or third-party voters are the same people burning police cars and smashing storefronts (or staging a "cry in" I-shit-you-not at Cornell) in "protest" of the election.   People who are willing to riot, but not to organize, contribute, or even vote.

But moving on to the next topic:  Will Trump be impeached?

It seems a bit premature to discuss this about a President-elect who has months before he is even inaugurated.   But the signs are starting to fall in place, including the idea being floated that the former head of Breitbart will be his chief of staff.   Trump needs a handler as President - someone to tell him "No" which was what was lacking through most of his campaign.  His family apparently tried to rein him in, but he is a loose cannon, to say the least.


"The President, Vice President and all civil Officers of the United States, shall be removed from Office on Impeachment for, and Conviction of, Treason, Bribery, or other high Crimes and Misdemeanors."  Article II, Section 4

What constitutes "High Crimes and Misdemeanors" is subject to debate, but most folks agree that it amounts to acts of malfeasance that occur while in office.   Trump might be on the hook for a lot of malfeasance due to his previous business dealings, but they probably would not result in impeachment.

What could and likely would get him in trouble is the way he plays fast-and-loose with the law.   As a "businessman" (reality TV star who licenses his name and image) he gets away with a lot of nonsense and the result is only lawsuit after lawsuit (more than 3,000 by his own admission) that he fights with a scorched-earth policy.

As a government official, his range of action is far more limited.  Everything you do is in the public spotlight, a matter of public record, and open to public disclosure.   The idea that you can just "stonewall it, dammit!" has already been tried, and shown not to work.  Even innocent-sounding things like using your own e-mail server can land you in a lot of hot water.

It is all speculation at this point, but if Trump is true to form, he will end up stepping in the dogshit eventually, by steering financial contracts to his own business interests - for example, using Trump properties for government functions, or other types of inside dealings.

His own business "empire" is part of the problem.  It can't be put in a blind trust, which is ordinarily what is done.  He has said his children will operate it in his absence.  But since it constitutes defined business interests (even if re-named "Scion") he will be well aware when he is steering business his own way.

And I doubt he could help it.  He is just that way.  And the Republicans in the House and Senate might pounce on the chance to boot out Trump so that Pence - a more predictable and desirable candidate from their point of view, assumes the helm.  This will be particularly true when Trump starts whining about his wall and import tariffs and term limits - all things real Republicans are not in favor of.

And at the first sign of trouble, Trump might just decide he is bored with the Presidency and just resign.   Weirder things have happened.

But it is all speculation at this point.  Stay tuned!

Fasten your seatbelts, it's going to be a bumpy ride!