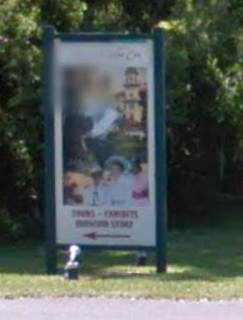 This sign advertising the Jekyll Island museum is very fancy but poorly thought out.


Living in a tourist destination is fun and all, but it can be frustrating.   Tourists drive slowly, looking for places to go and often do dumb things like jam on their brakes in the middle of the road or try to drive on the sidewalk (I kid you not) or bike path.   Outdated GPS units are part of the problem - many of them show sidewalks as roads (which they used to be).

But part of the problem is signage.  No one wants to be in a place with screaming billboards or ugly signs, that is true.  So many "upscale" places try to use discreet signage or attractive signs to ease the blight.   The problem is, they are often useless signs that do not convey much in the way of useful information.

Case in point is the sign above, at the entrance to the soon-to-be remodeled Jekyll Island Museum.   We can only hope a new sign is part of the remodeling.   Nearly every day, I see someone with out-of-State tags drive by this sign and then lock on the brakes, realizing after the fact that they passed their destination.  They then try to turn into the tramway, which is blocked with a gate, but appears to be the natural entrance to the building.   This causes a lot of backups and dangerous situations.

Why is the sign bad?   Well, it is a victim of modern technology.   In the old days, you hired a drunken sign painter (and they were all drunks, back in the day) and he painted in clear, large letters a sign with an arrow.   He knew his business and the business was no-nonsense clear and easily readable signs.

(I am not picking on this sign in particular, only using it as an example.  No doubt the people who designed this thought it looked good in the conference room - and it did - but as a sign it doesn't function well.  There are millions of ineffectual signs like this in America alone.   Oddly enough, the Authority has a standardized sign format which is a simple listing of destinations and arrows, but for some reason, they felt compelled to go with graphics on this sign, instead of sticking to the standard format).

Today, we have computers and machines that will print color images, so we think we need to do this to be trendy and hip.   The problem is, images don't read well when you are 100 feet away driving 30 miles an hour.  The above image, from Google Earth (yes, I am too lazy to go take a picture myself) is blurred out to obfuscate facial features.   But that is about what you see when you drive by in your car.

The sign has a lot of images of the club hotel and the "lady in the hat" but the actual wording of the sign is obscured.   At the top of the sign in an olde timey distressed lettering is the name of the museum.   You cannot read this driving by at 25 mph, which is the speed limit.   At the bottom of the sign is some lettering, but far too small for the size of the sign.  The graphics, which are unnecessary and communicate nothing - other than a lady in a hat - offer no real information and distract from what little information is available.

Sadly, a lot of people fall into this trap - designing fancy logos that cannot be read from more than five feet away.  After the hurricane, a local tree service put up signs on lawns of homeowners whose trees they serviced.   They might as well not have bothered as the logo had a large stylized tree on it, which looked like a Rorschach ink blot.  Maybe it was a tree, maybe a Denver omelette.  Hard to tell.   Worse yet, the lettering took advantage of another computer-generated nightmare - the ability to stretch and shrink letters.  So instead of JOE BLOW'S TREE SERVICE we had JOE Blows tree serVICE with the key word being "TREE" and that word being the smallest on the sign.   I could not tell if he was a roofing repair guy, plumber, HVAC tech or what.  Worse yet, the phone number (the key ingredient) was in even smaller lettering.

These computer-generated signs are like so much that is computer-generated.   It looks good on the display at the store or at the company, but in the real-world, it falls down flat.   For example, HTML coders using state-of-the-art computers on high-speed fiber optic networks located less than 100 feet from the server, generate complicated pages with lots of video and graphics and photos, which are all slow-to-load on older computers and slower connections.   We don't need a fancy graphical page to log into our bank account, thank you.  This is not progress, it is regress.

Sure, we can put photos in our signs.  And sometimes a catchy photo or logo "catches the eye" and gets people to read the sign.   Other times, what looks like a neat photo looks like an ink blot when viewed from afar.   Another sign on the island has a horse's head on it, and for about a year I could not figure out why they chose the face of an alien for a logo, until I walked up to the sign one day and saw, at about 20 feet away, it resolved into a horse's head.

Lettering on images is also problematic, as the contrast will vary with the background of the image.  Some folks put green lettering on a photo that is mostly green (a Christmas Tree, for example) with the net result being you can't tell what the photo is and certainly can't read the lettering.  Thousands of dollars paid for graphics, thousands more to rent billboard space - the net result is, no one can read it.   You might as well just not bothered.

The best signs have simple lettering in high contrast and can be read from 100 feet away or more, from a vehicle traveling by at the posted speed limit.   The best signs convey the basic information - what you are advertising, where it is located, what time it is open, what your prices are, etc. - the exact choice depending on the nature of the business.  For example for a gas station, just "GAS $1.99 THIS EXIT!  OPEN 24 HOURS!" is about all you need to say.  A fancy image of the gas pump or children frolicking in a field of flowers is just confusing.

The less information, the better.  Clear and concise.

And this goes for Garage Sale signs.   I have seen so many garage sale signs done in pastel markers on 8.5 x 11 paper, stapled to a utility pole so they blow in the wind and fold over.   The lettering is tiny - as if the author was too shy to advertise the sale.  Better off to print something on your computer (set the font to 75 point and make it fill the page - set the margins to zero and orientation to landscape).   Tape it to a piece of cardboard or some old political sign (which I paint with used house paint first) and "Wa-La!" you've got a simple, easy-to-read sign that someone in a car can comprehend in a nanosecond.

Sadly, bad signage is here to stay.  We have all this technology so we feel compelled to use it.  But I have lost count of how many "car wraps" I have seen where you can't figure out, for the life of you, what exactly it is they are trying to advertise and promote.