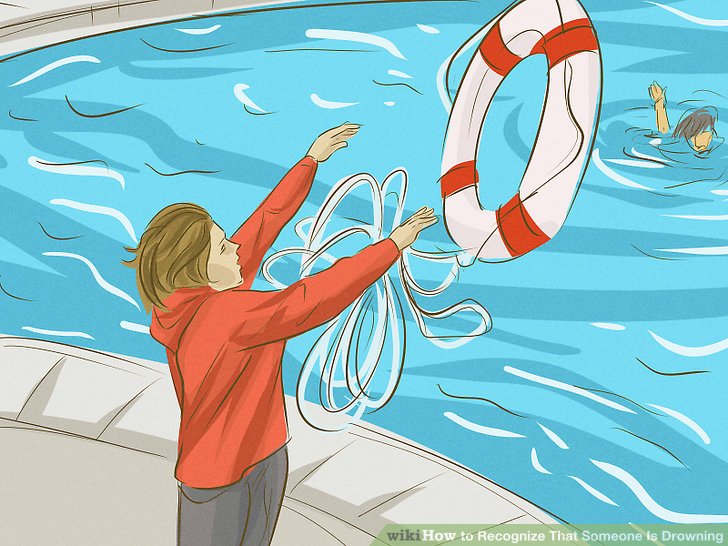 Sometimes, offering a helping hand to someone can actually drown them.

I noted before in an earlier posting that if you see someone drowning, throw them a life ring.   But if they tell you that they don't like the particular color of the life ring you threw them, and ask what the other color choices are, just walk on - the person really isn't in peril.

If you took Red Cross lifesaving courses, you know that rescuing people is fraught with hazard.   Every year, some good Samaritan tries to jump into the water to rescue a "drowning" person, only to be drowned themselves.   People who are panicked in the water will grab a hold of you and push you under in an effort to save their own lives.   You are nothing more to them than a source of buoyancy.  And after they sink and drown you, they inevitably drown as well.

We were taught in lifesaving class that you should keep your distance from panicked swimmers.  Push a swim float or other floating object toward them.  If all else fails, clock them on the head and knock them out and then drag them ashore by their hair.   I am not making this up - that was the lifesaving advice we were given in 1976.

And it was probably good advice, both for life guards and for ordinary folks as well.   In your life, you will be confronted - time and time again - by people who claim to need your "help" because they are in peril.  And often, your good nature is used against you.  You try to help, only to be dragged under yourself.  If you see a friend about to drive their car off a cliff, advise them it is a bad idea - but make sure you are not in the back seat when it catapults off the edge.

We all tend to think, at one time or another in our lives, that we are drowning in a bottomless pool of water, surrounded by dangerous sharks.   It is only when we stand up and realize we are in the kiddie pool, and it is only three feet deep, that we realize what idiots we have been.   And when you try to tell the fellow "struggling" next to you, he likely won't believe you - even as you tower over him, standing in the shallow water.   You must have some sort of special advantage!  Maybe you can walk on water or something!  Or maybe the kiddie pool just isn't that scary.

What got me thinking about this was a friend of mine who had a "troubled" daughter who turned her life around - but only after family members stopped trying to "help" her.  As a teenager, she got into trouble, running away from home, doing drugs and whatnot.   Family members tried to intervene to "save" her, which is a noble idea, but causes problems of its own.  When a toddler wanders off and heads toward the swimming pool, you should intervene and snatch them away from the edge before they drown.  They are too young to understand the danger, and yet they seem to be instinctively programmed to be attracted to it.  Every year, hundreds of toddlers drown this way.

But what about when people get older and can make decisions for themselves?   At what point is it better to let them make mistakes and learn from them, as opposed to coddling them and insulating them from consequences?  It is a hard call to make, but it seems that when people have to face consequences, they do better than when they are shielded from them.  And this has been particularly true in my own life.   What little success I have had in life came about not from "help" from relatives or friends, but because I had to sink or swim on my own.

My friend's daughter was rescued from a life of homelessness and survival sex on the streets (and likely exploitation, if not death).  But one wonders if she had stayed out on the streets a week or month longer, maybe she would have come back home having learned some valuable lessons.  I know that sounds harsh, but rescuing people is a narcissistic act on the part of the rescuer.  The rescuee often gets little out of the deal, other than to be put back into the situation they were trying to escape from.

Anyway, as might be expected, this young lady got into more legal trouble - petty theft and whatnot. Only this time around, being over 18 years old, it was time for adult court and adult consequences. But courts are lenient with young people and "first time offenders" (which translates to "first time they got caught") and the punishment was minor.   Her grandfather offered to pay her rent while she went to college, so she went to college - not to get a degree, but to get free rent (you see how this works).   The college degree really went nowhere and Grandpa's money eventually petered out.

Now, in her 20's, she has to sink-or-swim.  No more checks from parents or grandparents, no one to rescue her from her own malfeasance.  No lenient judges who will take into account "youthful indiscretion" and hand out light sentences.  Welcome to adulthood.

And a funny thing happened.  Left to sink or swim, she swam - beautifully.  Maybe not Olympic caliber stuff, but pretty amazingly well.  Once the "helping hands" and training wheels had been removed, she learned to survive on her own - and survive well.   Today she is a businesswoman and investor and she can honestly say she did it all on her own, as none of her accomplishments are the result of "helping hands" of parents or relatives.

The term "training wheels" is particularly appropriate.  In the various campgrounds we've visited over the last five months (!) we've seen a number of young families with kids on bikes.  And often you see a child with a bike with training wheels, making that horrid noise that training wheels make, as they teeter down the road, first on one wheel, then on another.   Often their younger sibling is already on two wheels - outshining their elder - as they didn't lean on the perceived safety net of training wheels.  It is almost embarrassing to see kids who are old enough to be riding a ten-speed, tottering around on training wheels.  The only thing more awkward than that is some 20-something male riding a child's BMX bike to the corner store to buy beer - something we also see a lot of in our travels. 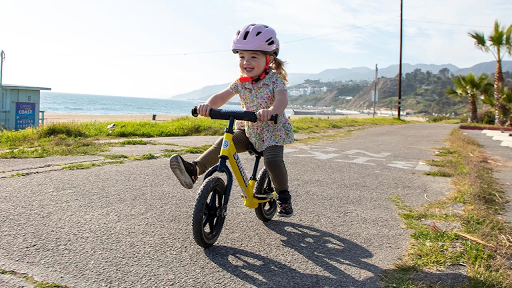 They have new kinds of bikes today for small kids - ones with no pedals.  They are like the original "velocipede" bike of the 18th Century.  You run your feet along the ground to move the bike - and the kids seem to take to this naturally, coasting for quite a ways on two wheels with no feet on the ground.  They can graduate from these pedal-less bikes to the pedal kind without the need for training wheels.  It is an interesting idea.

The point is, and I did have one, that training wheels and other forms of "safety net" may seem like a good idea and a humanitarian gesture, but often these sorts of things just allow a person to remain in stasis and not change their own environment and outlook in life.   Parents want to be "kind" to their "troubled" son and let him live in the basement well into his 30's.  Are they helping him or harming him?   For me it is not a difficult question to answer.

And often, the things we are "rescuing" people from are trivial dangers.  Grandma co-signs a new-car loan for her grandson, because he "needs a reliable car to get to work!"   We hand out money to people in this country so they won't be too uncomfortable in life, not so they won't starve to death.  Despite the nonsense you see on the TeeVee, there are few, if any, people in this country who are starving - in fact, quite the opposite.  The number one health problem in America among the poor is obesity.

We actually have a program in America to give out free smart phones to people, if they are "too poor" to buy one on their own.   This is a far cry from the "help" they offer to the poor in Africa - which usually consists of a bag of rice - if it is not stolen by warlords first.

It is not that these programs are bad or should be abolished, only that one wonders, if they were curtailed, would people seek out other options on their own? When some companies (and municipalities) raised the minimum wage to $15 an hour, there were reports that some workers asked for fewer hours to work, so they would not lose subsidies for food stamps, section-8 housing, medicaid, or Obama Care.  Hey, if Grandpa is offering to pay, why not?

But politics aside, on a personal level, being coddled and "helped" is a trap.   So long as you depend on others for help, you will be caught in a never-ending cycle of dependency and supplication.   And often in these deals, the person getting the "free money" from parents or siblings, resents the person giving them the money - because often this money comes attached with conditions or at least a lecture or two.  It is a hard way to earn cash!  It is a lot easier, in retrospect, to just earn your own, just as it turned out to be easier to walk out of the kiddie pool, rather than wait for rescue.
Newer Post Older Post Home