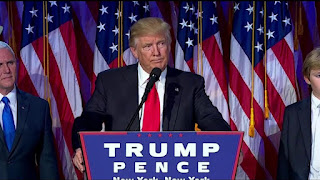 UPDATE:  Thankfully, I was wrong.  The Democrats won in spite of their best efforts!
I finally got those time machine parts on backorder from Amazon, and once I got it working, I decided to go to the future and see who won the Presidential election in 2020.  Stupidly, I forgot to get the winning numbers for tonight's power ball!  Oh, well, better luck next time.

I regret to say that Donald Trump won re-election, and the reason was not that he excelled in campaigning or was popular with the people, but that he read the electoral map (once again) and calculated where he could use his limited resources to the best effect.  And this time around, he had more resources to use as well.

But the real reason he won was the Democratic party - they put up a roster of loser candidates that Trump picked apart, piece by piece (and the Democrats obliged him - as they did in 2016 by picking each other apart as well).  And good old Bernie Sanders got onto the game again, campaigning as a candidate for the party he refuses to join.   He joins Ross Perot and Ralph Nader in the pantheon of great spoilers throughout history, as his eventual lukewarm endorsement of the winning nominee only served to insure that his supporters stayed home in droves.

So, how did the Democrats lose this time around?   Well, it was in large part due to who they put up as candidates - and how easily Trump and his minions picked them apart.

Joe Biden seemed like an early front-runner, and indeed, today, he holds that status before even declaring his candidacy or even before the campaign season begins.   Biden clearly worries Trump, as he has the mantle of Obama (which resonates with the core Democrats) and is also a member in good standing of the "old white men's club" which typically is the source of Presidential timber.

So already, even today, the attacks are starting.  "Crazy Uncle Joe" they call him on social media and Reddit.   You post a picture of a cute cat, and five comments later, someone says, "Gee, he looks like Joe Biden!" and after that, the thread devolves into "Crazy Uncle Joe" who has "busy hands" and five comments later that he is, in fact, a child-molesting pedophile who likes little girls.   All of this is taken as routine fact and never challenged.  And this drumbeat of hostility has been going on for some time now.

All Trump has to do at a rally during the campaign is say "Crazy Uncle Joe" and it is a dog-whistle to all the conspiracy theorists out there in his audience.   It also helps that the moniker also tags him as being old and out-of-touch.

But of course, Joe Biden isn't a pedophile.   But you tell that to the legions of people on Reddit who already believe this, without one scintilla of evidence.  Heck, they already believe that pizza shops are clandestine child molestation rings.   What is it about the far-right and their obsession with child molestation conspiracy theories?  Over-compensating a bit, perhaps?  Hey, this is politics - a counter-theory and smear are just as valid.

Of course, it didn't help that Joe Biden does have a "busy hands" problem in this day and age of "Me Too" - and that the other Democratic candidates took turns tearing him down for inappropriate behavior.   When he does a photo op, he often puts his arm around attractive women and sometimes says inappropriate things.  The Republicans only needed to photoshop half the pictures they spread on the Internet to make this point - the rest were bona fide real.

So Biden was knocked out early in the primary season, the victim of an effective smear campaign and rumor mill, as well as the "Democratic Firing Squad" who lines up in a circle and shoots themselves.

That left Elizabeth Warren as the new front-runner, and Trump and his minions have been sharpening their knives for her for some time now.   It may be that her candidacy was over before it started.  Once again, Trump maligns an opponent with a moniker - "Pocahontas" - and it seems to stick.  Warren was foolishly drawn into the game by having her DNA tested, which proved, well, nothing, other than she, like anyone else on the planet, is distantly related to other people, including native Americans.  The real issue is that she claimed Native American ancestry on an application form for Harvard and may or may not have gotten special advantage from this (no doubt Harvard used her check-box to show it was meeting racial quotas, but then again there are no racial quotas at Harvard, or maybe there are, as we'll find out in the upcoming trial).

Warren wasn't a bad candidate, but too far to the Left for most Americans.  Her heart is in the right place, but America isn't ready for far-left Socialism.

Of course, it didn't help matters any that the entire Democratic Primary system was distracted by bogus candidacies such as that of Michael Avenatti, whose only claim to fame (quite literally) was being Stormy Daniel's lawyer (and apparently not even very good at that, if today's decision throwing out her suit is any indication).   Apparently, in the post-Trump world, anyone can be President of the United States, regardless of experience or qualifications - the two things that sunk Hillary's campaign.  Being an "outsider" is seen by the ignorant masses as a sign of honor, not a sign of idiocy.

Eventually, Avenatti fell by the wayside during the primaries, when it became clear that he had no other platform other than to play a "villain" role in Trump's reality-television Presidency.  What puzzled so many of us is why the media even took his candidacy seriously for a moment.  Yet even today, the Post and the Times, report on Avenatti's moves to run for President as if he were a serious contender, instead of a punchline to a bad joke.

The rest of the pack wasn't much to write home about.  Julian Castro, the former mayor of San Antonio and a mid-level Obama official, didn't have much in the way of credentials to tout.   Being mayor of crime-ridden San Antonio is about as much a resume-booster as being mayor of Chicago (let's not even go there!).   Yes, like so many other people, I got my car broken into in San Antonio.  It is what you do there.  You go down to the riverwalk, see the sights, ride the tour boat, and then call the glass company to replace the window on your car.   People even told me in advance this is exactly what would happen.  And I was parked behind the courthouse - beneath a security camera (that of course, was broken, like the government in San Antonio).   Julian Castro?  Please!  Don't insult our intelligence.

Of course, the name of Alexandria Ocasio-Cortez was bandied about, but she is only 28 years old today, and would be five years shy of the minimum age needed to be President, according to the constitution.   Democrats were foaming at the mouth over her, convinced that "Democratic Socialists" would carry the day - which they might for the primaries, but the general election is won by the independent voters - middle-of-the-road middle-class people whose one major goal in life isn't radical change of the government, but don't rock the boat - not while they're paying down a mortgage and funding their 401(k).  Promises of a socialist utopia simply didn't resonate in suburbia.

And that, in short, is why Bernie Sanders fizzled out.  A man who won't commit to joining the party whose nomination he seeks, isn't fit for office.  His far-out socialist politics simply didn't carry the day.  Forced to choose between an unhinged Twitter addict whose policies are, for the most part, pretty standard Republican fare, and an uncertain future with draconian tax increases, big government, and socialize medicine, the independents either stayed home or held their nose and voted Republican.

New Jersey Senator Cory Booker tried to recapture some of that Obama magic - and hoped he could get out the black vote.  But being senator from a failed part of a failed State is about as toxic as being mayor of Chicago.  Next!

One would think the "Me too" movement would favor women candidates, such as Elizabeth Warren or Kamala Harris.  But as the Hillary experience proved, a substantial number of women are not prepared to vote for another woman just because of their gender.  Political positions and views are more paramount.  Warren failed in her attempt to counteract the "Pocahontas" nonsense - playing right into Trump's hands with a DNA test.  Harris, on the other hand was just too inexperienced, having only been elected to office in 2017.   It was all-too-easy to play her off as untested and unready.

New York Mayor Micheal Bloomberg might seem like a good choice - a member in good standing of the "old white men's club" and a conservative Democrat - being elected mayor initially as a Republican.  His experience and more centrist views would have won the votes of the independent voters.   And unlike Trump, he is a real multi-billionaire, estimated to have over $50 Billion in wealth.  But this very fact made him fodder for attacks from the Sanders crowd, and he was shouted down before he could even speak, early on in the primaries.

I won't be a spoiler by telling you who actually won the Democratic nomination, but if I did, you'd gasp and say, "really?  that was the best they could do?" and you'd understand why Trump won yet again.
Newer Post Older Post Home