And So It Begins - Not With a Bang, But a Whimper 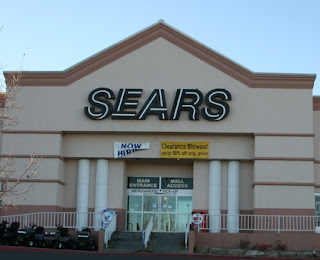 Sears just quietly declared bankruptcy the other day - and no one seemed to notice.

Like so many other people who follow the market, I have been on Sears death watch for years now.  At one time - decades ago - I owned Sears stock, which I bought through the Money Paper one share at a time.  I made a little money and got out.   And it was a good thing.  How they stayed in business for as long as they did is an interesting question - it takes a long time to topple big companies.  You can survive a long time simply by cutting off your limbs and eating them.

The financial press has been predicting a recession for some time now - and that is not a prediction that is hard to get right.  Our economy is defined by successive booms and busts, since the dawn of time.  And with each boom, there is a bust, and in retrospect, we all look back and wonder why it took so long.

And maybe, well maybe, the time for a market correction has finally come.   I am sure that those in power today hoped it would be in 2020 or beyond, so they could blame it all on the Democrats.   President Trump (throw up in mouth a little) already is posturing that if the Democrats gain a few seats in the House next election, they will be responsible for the coming recession.   Pretty neat game plan - blaming in advance for the fiasco that will inevitably come.

Sears' problems are well documented, and go far beyond the "everyone is shopping online on Amazon" excuse.  Sears made many mistakes - well documented - from trying to promote it's "softer side" to axing the catalog just prior to the age of online shopping.   One could even argue that their mishandling of their online service Prodigy was partly to blame - in a pre-AOL era, Sears pretty much owned online access, and could have piggybacked this with online ordering via its catalog, and pre-empted eBay, Amazon, and a host of other online commerce sites.

But absent a working time machine, "coulda woulda" is a stupid game to play.  And in an era where Walmart and Target and a host of other "brick and mortar" retailers are still coining money, these Amazonian excuses are a little thin.   Sears was mismanaged to the point where it was so cheap to buy that a bankrupt Kmart ended up owning it - with a major shareholder and CEO who felt the real estate was worth more than the underlying business.  And who knows?  He may end up holding all the real estate - as well as other properties, real and intellectual - when the dust settles.

But one thing is for sure, a lot of retirees counting on their pension from Sears are going to have a rude surprise pretty soon - including some people I know personally.

Of course, the Sears bankruptcy will spook markets, and people will be less willing to lend to sketchy old-school brick-and-mortar stores.  J.C. Penny will be next in line - also having to service a huge debt load, while at the same time seeing its customer base age out.

Who's next after that?   Heavily leveraged companies, particularly money-losing tech companies, will find the well has dried up.  Even if they can get financing to stay in business, they will have to pay higher interest rates on that debt, due to rising rates at the Fed.   Why risk losing everything when the government is offering guaranteed bonds for not a lot less?   So Elon Musk has a very good reason to get high as a kite all the time.  Just pretend it isn't happening, Elon - it seems to work for Trump.

But rising interest rates will have other side-effects as well.  As mortgages push 5% these days (which they are) the cost of owning a home will increase - or the cost of homes will decrease.  As I keep harping on in this blog, the price of a home is based on the monthly carrying cost, as most plebes have "jobs" and thus can only afford to pay a certain percentage of their take-home pay to service a mortgage.  Raise the interest rates, insurance rates, or property tax rates, and the prices go down - just like a see-saw.  And no, this is not up for debate.  Homeowners simply can't just come up with the extra dough to pay skyrocketing interest payments, taxes, or insurance.  At some point, people stop buying - and prices go down.

Price go down, and the guy who bought a house last week shits his pants.  His house is now worth less than what he owes on the mortgage.   If this goes on long enough and severely enough, people end up walking away from houses and mortgages.  Why do I say this?   Well, I've lived through this twice in my lifetime already, in 1989 and 2009.   These things are happening more often and with more pronounced effect, as time goes on.

Jobs are no longer scarce, and in fact, everyone is hiring.  But despite Amazon raising wages to $15 an hour, wages have not really gone up in real terms, at least according to the labor department.  With wages stagnant for a decade or more, people don't have a lot of money to spend these days.  A few shocks - psychological or real - could cause people to spend less.   When you see your disposable income drop, due to increases in rate in your ARM mortgage, you spend less.  When you see your neighbor lose his home to foreclosure, you tend to spend less as well.   The thing feeds upon itself.

A pensioner in upstate New York, who sees their modest pension from Sears drop from $250 a month to $75 a month, will start spending less.   Thank God her husband still has his pension from J.C. Penny, right?   These are real people and real situations.   When the shit hits the fan, they will start spending less.  Now multiply this by 330 million people.   You see how it plays out.

Does this mean the end times are coming?  Of course not.   It means a lot of us will lose a little money.  A few will lose houses and jobs.   Eventually we all go back to work, for a lot less that what we were making before.  Hopefully, when that happens, we will be able to spend our meager paychecks on cheap crap made in China.