The WGASA railway is no more.  What does this tell us about public transit choices?

The San Diego Zoo is famous for a number of things. When I was a kid a wildlife expert - Joan Embery - from the San Diego Zoo was always showing up on the Johnny Carson show bringing some sort of lemur or monkey which would poop on the desk or sit on Johnny's head.  Funny stuff.

The Zoo annex - the safari park - was famous for its WGASA "African Bush Railway" which took visitors around that Park.   According to Snopes, WGASA stands for "Who Gives A Shit Anyway?" - which was written across the memo soliciting names for the rail line.

But the WGASA railway is no more - and in fact it was never a railway, but actually a monorail.  It has been replaced by a series of open-air buses which are used to give visitors a tour of the safari park.  Similarly, in the main Zoo, open-air double-decker buses are used to drive visitors around the park - and the ride is included in the base admission price.  There is also an overhead tramway you can take from one end of the park to the other, sponsored by Alaska airways. 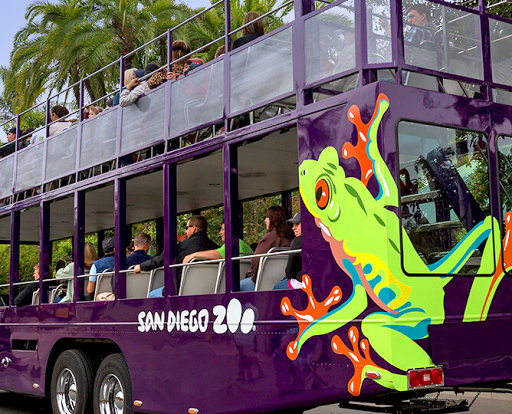 A bus is a lot cheaper to run than a railroad - particularly a monorail!

At first I was a little taken aback by this.  Buses?  Why not some sort of charming miniature railway or something, like at most amusement parks.  And make no mistake, the San Diego Zoo is part amusement park and part Zoo.  People come there for the rides as well as to see the animals.

But the reasons given for using buses in both parks was simple.  Buses are more reliable than a miniature railway or a monorail.  Buses can be taken in or out of service as needed.  If a bus breaks down, the whole system doesn't grind to a halt - rather, the offending bus is just towed away and another bus used to replace it.  Bus routes can be changed at will and new routes added to show new exhibits or old routes cut back if they are less popular.

But the big reason they switched to buses, is that buses are far cheaper than monorails or miniature railways or other forms of "light rail".  They don't require specialized tracks and they don't require specialized rolling stock.  Buses are mass-produced and can be bought very cheaply, even customized buses that have been cut open to allow people to see out more easily.

It struck me as very interesting that in both cases - the main Zoo and it's Safari Annex, there are a large number of people using the public transportation there.  One would think with such a guaranteed flow of customers, some form of light rail would be more appropriate and more cost-effective.  And indeed, with WGASA, light rail - a monorail - was tried.   But of course, buses are just a whole lot cheaper.

It is an interesting observation, as across the country, public transportation proponents have argued that we need to install more light rail.  And indeed, here in San Diego - and even in Los Angeles - they have installed light rail systems.  But are these systems any better than city buses?

As I noted before, for the cost of operating one light rail line, you can operate an entire fleet of city buses.  And again, just like at the amusement park, when one bus breaks down, it can be quickly taken out of service and replaced with another working bus.  The entire system doesn't have to be shut down because of one broken rail car.

And unlike light rail, city bus routes can be changed and altered at whim to suit the needs of the riders.  The main thing is, buses are a hell of a lot cheaper to run than light rail and thus have a better shot at at least breaking even compared to expensive light rail systems.

Oh, and if you decide to change vendors in a bus system, it is as simple as replacing your aging buses with newer ones from a different vendor.  Once you buy into a light rail system, you're pretty much locked into the high-tech vendor who sold you the system - as usually equipment is not compatible with other makes and brands.

Light rail proponents - which I'm not convinced are merely shills for the company selling these systems (act shocked - in this day and age?) - argue that light rail is more convenient and faster and easier to use.  I would disagree on all four counts.

The idea that light rail is faster is really bogus.  I rode the Washington metro line for years, and at best, it was really was no more faster than driving or taking the bus.  Often, it took far longer - sometimes hours, to go by "Metro".   Light rail proponents argue that the dedicated tracks mean the light rail can zoom past stuck traffic.  But often light rail tracks are laid down the middle of street and trolleys find themselves stuck in traffic with the rest of us.  If there is any advantage to dedicated tracks for trolleys, it can be - and has been - replicated by providing dedicated bus lanes or allowing buses to use HOV lanes.

There's also the problem with light rail interacting with city traffic.  In some cities, light rail travels down the center of the street - and there are a host of YouTube videos of cars colliding with light rail trains, due to the confusing nature of the signals.  Drivers try to make left turns in front of a trolley, and the trolley usually wins.  Oh, and when there is a trolley/automobile collision, the trolley line may be shut down for hours, until the wreckage is cleared.   A bus, on the other hand - tow it away and send a new one!

Here in San Diego, the light rail follows Interstate 5 part of the way.   When you get off at an exit ramp you have to turn to either cross the light rail tracks or go the other way.  Regardless of which way are headed, if a light rail train comes by it locks on the traffic signals to red, even for traffic that is turning away from the tracks.  Actually, the lights flash red, which usually means you can stop and then proceed with caution, but most drivers don't seem to understand this and are paralyzed until the light rail train leaves the area.

At that point, the traffic signaling system resets itself, and you are at the end of the cycle once again waiting for the light to change, so you can make your turn.  However, if before the end of the light signal cycle, another light rail train shows up - as happened to me the other day - the entire signalling system is frozen once again.  Suddenly, traffic is backing out into the interstate simply because two trains came through, one shortly after another.

And although it was rush hour, neither train had very many passengers in it.  Was it really worthwhile to inconvenience dozens, perhaps hundreds of people in order that 20 people could ride the light rail?

I'm not against public transportation per se, but it should be cost-effective and flexible.  Light rail systems are neither. They cost an awful lot of money and are very inflexible and expensive to maintain and thus have even less of a chance of even breaking even than bus systems do.  Oh, and we the taxpayers have to pay for these nightmares, simply because some big company lobbied (and bribed, no doubt) the city commissioners - and convinced a host of "useful idiots" that life would be a dream if we only brought back Zeppelins and Trolleys.

The San Diego Zoo abandoned its WGASA Railway because it was too expensive to maintain and broke down frequently.  When it broke down it left the entire Zoo paralyzed.  They have switched to buses is they are more economical, reliable, and flexible.  Maybe there is a lesson there for public transportation advocates.   Maybe!

UPDATE:  When leaving San Diego for Palm Springs, we noticed that they do have "bus lanes" on some expressways.  These bus lanes even have bus stations, that look a lot like "light rail" stations.   Nice art-deco sort of FLW design, too!    The idea is simple:  You can make a bus line look like a light rail line, and it costs a lot less than a light rail line!   The effect is the same, sans tracks and overhead wires and million-dollar rolling stock.
Newer Post Older Post Home