Anger Politics & the Politics of Hate 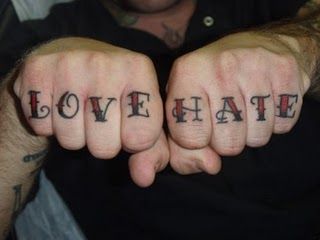 I mentioned before that one reason we left the lake house near Ithaca, New York (besides the staggering taxes) was that we were reviled in both the city and the county.   We lived in the Ledyard County, which is mostly farmers and pretty rural - very conservative social values.  They viewed us as liberal interlopers - "city folk" with skewed values.   And they came to this conclusion without even bothering to get to know us personally.  Hatred is all about snap judgement.

On the other hand, if we drove into nearby Ithaca, New York (nearly 20 miles away) to go shopping or visit a restaurant, we were accused of being too conservative by dint of having Georgia license plates, and the audacity to drive a nice pickup truck (without rust holes in it) or  God Forbid - a BMW convertible.   We were deemed too wealthy, too conservative, too Southern, too... whatever - and again without even bothering to get to know us.

It was an insane place, Central New York, and so we left.

But lately, it seems the whole country- indeed, the whole planet - has followed a similar path.   While traveling in Canada, we were buttonholed more than once by Canadians who wanted to lecture us on how bad Trump was, as if we were personally responsible for his election, or even voted for him.  For the record, a resounding "no" on both points.

You see this a lot today - people angry, white with rage.  They drive with their jaws clenched, tailgating and swerving in and out of traffic.   They hate their fellow man, who they see only as a nuisance to be overcome.

In politics, the effect is amplified by a factor of 1000 - on both sides.  And each side accuses the other of hate-mongering.  The left hates the rich for being rich, the right hates the poor for being poor.  No one is immune from this hate-mongering.

The left claims the right is "bad" because they are racist, islamophobic, or homophobic, or whatever.  And yes, there are people on the right who fit this description, but not all of them.   Meanwhile, the same left that decries the use of "dog whistles" goes on the Internet to decry garbage disposals as being "bougie" - alerting the rest of us to this coded language of hate the left is now using.

In case you are late for class, let me bring you up to date.  If you are a "person of color" or a sexual minority, or female, or of some non-Christian religion, you are OK in their book, by default.  If not, you may still join the club if you decry wealth and live in a van, or better yet, on the street.  So long as you own nothing and have no goals or desires in life, you are a decent human being.

On the other hand, if you think having a nice place to live is a good thing, and owning a car isn't a crime, then you are a "bougie" - which is short for "bourgeois" which is a term used to describe people they will line up against the wall or send off to "re-education" camps, once they are in power.

Am I exaggerating a bit for the purpose of entertainment?  Perhaps.  Perhaps not.  A lot of these angry people on the left don't just want to elect their own candidate, they want to annihilate the opposition.

Lest you think I am being unfair to the left, the right has been playing this game even longer.   "If only we had complete control of both houses of Congress, the Presidency, and the courts!" they whine, "Life in America would be paradise!"    But the "founding fathers" who they so desperately want to blow, were smarter than that, and devised this nice little clockwork known as the Constitution, which has effectively preventing any one party from running the show - for very long - or even getting anything done, if they are in power.

Today, we are not encouraged to talk about policies or positions, but rather personalities and personal foibles.   President Trump's policies merit serious dissection and discussion in the media - sadly this is lacking most of the time, in favor of the latest twitter outrage, which serves only to distract people from what is really going on, which is probably the plan all along.   Every time the New York Times gets its panties in a knot over something Trump says, his supporters shout with joy - because annoying the NYT makes them very, very happy - which is why they love Trump.  Trump trolls the left-wing media and they fall for it every time, like Charlie Brown trying to kick the football held by Lucy van Pelt.

So what's the point of this?   If you find yourself being drawn into a rage against the "other side" - regardless of whether it is left or right - ask yourself how this is helping your own bottom line.   People who live in their parents' basements will go on for hours about how they are outraged over politics.  Folks whose personal lives are a trainwreck, for some reason know all the answers to solve the world's problems - but never their own.

Hating Nancy Pelosi, Trump, or the "Gang of Four" is not constructive use of your time.   Falling into line with their own hate-cues is even worse.    George Orwell, in his dystopian novel, 1984, called it the "two minutes hate" - an opportunity for the State to rile up the people against "the enemy" in a cathartic release of hatred energy, all carefully controlled, of course:

The horrible thing about the Two Minutes Hate was not that one was obliged to act a part, but that it was impossible to avoid joining in. Within thirty seconds any pretence was always unnecessary. A hideous ecstasy of fear and vindictiveness, a desire to kill, to torture, to smash faces in with a sledge hammer, seemed to flow through the whole group of people like an electric current, turning one even against one's will into a grimacing, screaming lunatic. And yet the rage that one felt was an abstract, undirected emotion which could be switched from one object to another like the flame of a blowlamp.[3]

How interesting, when viewed through the prism of today's politics.  Whether it is chants of "Lock her up!" or "Send her back!" at a Trump rally, or chants of "Impeach!" at a Pelosi rally, it makes no difference.  Logical political thought is being replaced by sloganeering and brainwashing.   And it is fun, too, to wallow in the mud, reducing yourself to the lowest level, as Orwell noted.   It isn't hard to get people to do this.