Somebody Thought of That.... 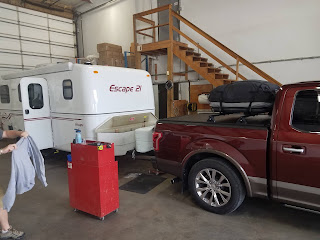 Every little detail on everything you own was thought over and maybe fought over by one or more people.


As an Engineer - or a former one, anyway - I appreciate the amount of effort that goes into designing a product.  Not only is there a lot of mental work, but there is the political aspect as well.  It is not just enough to design something, but to decide what is you are to design.   And even the smallest details require thought.

We are enjoying the used F150 we bought.  It averaged 22 mpg across 3700 miles of America, maxing out at an astounding (to me, anyway) 27 mpg going across Ohio and Indiana.   Once I let up on the accelerator, the mileage really improved.   With the trailer attached, the mileage dropped in half, which makes sense, as you are basically doubling the weight involved.   Each vehicle weighs about 4,000 lbs, and each is getting about 24 miles per gallon, so the net result is 12 mpg.  Not stellar, but better than the 5-6 mpg many motorhomes and larger trailers get.

One interesting detail about the truck is that when you hit the turn signal lever briefly, it flashes three times.   OK, no big deal, you say - most cars do this, at least at the mid-level trim and above, right?  They call it the "lane change" feature. But what is interesting is that with the trailer attached, it flashes five times.    Yes, the system recognizes the trailer (and keeps track of trailer mileage and tells you if a light is out) and also changes the directional turn signal operation when it detects a trailer is attached.

A tiny thing.  A stupid thing.  But a useful thing, as it takes longer to change lanes when you are towing a trailer.  And someone had to think of this.  And it is also useful in that the lane control feature (a primitive form of self-driving) will try to wrest control of the vehicle from you, if you change lanes without using a turn signal (it assumes you are drifting out of the lane, unless you put your signal on, first).

But it got me to thinking, who thought of this?  Some unsung Engineer at Ford, or one of their suppliers.  And I can see the meeting in the conference room going down - "Well, Fred here thinks the lane change feature should flash five times, instead of three, when you change lanes with a trailer!   Fred, don't you have anything better to do?"  And they all laugh at Fred, because the other Engineers are doing serious stuff, you know, like designing turbochargers or ten-speed transmissions.  Fred needs to get a life!   But he fought for this design change, and I noticed it.  And it is the little things that often make a difference.

Some other things are less little, but we notice them just the same.  On the ferry on the way to Victoria, I met two nice Indian Engineers.   I love Indian people and their cuisine.  I don't love it when they call me at all hours and try to persuade me that my social security number has been revoked, or that my computer has a virus.   India needs to police this sort of shit, as their reputation as a country is stained by the crooked telemarketers.   Most Americans' first impression of India is that garnered by crooked call centers.  Just a thought - if you want to make a presence on the world stage, basing your economy on corruption is a bad start.

Anyway, these guys used to work for HP, and one was responsible for inkjet printers.  So we talked about the good old days in silicon valley when silicon valley was silicon valley and not bullshit valley.  And one of the things we talked about was the demise of the printing business.  To be sure, the internet and large displays were part of the problem for printers - why print something out when you can see it on a screen - a huge screen at that?   The other problem is that HP and other printer companies (mostly HP, though) got greedy and decided to screw their customers.

In the old days, you bought an HP laserjet and it was like a diesel engine (smelled like one, too).  You put cartridges in it and it printed out hundreds and hundreds of pages without a hiccup.  The cartridge would finally empty out and you could buy a new or refilled one from a number of sources.   HP thought, "enough of that!"

So they put chips in the cartridges and using copyright law in a manner it was never intended to be used, claimed that anyone copying these chips violated their copyright.  The only purpose of the chip was to prevent the user from using a third-party cartridge or using a refilled one.  HP claimed - with a straight face - that this was to "protect" the user from bad cartridges!

And the cartridges got smaller and smaller.  Inkjet cartridges were the worst - running out of ink or just jamming up and drying up after a few dozen pages of printing.  The cost-per-page skyrocketed and people just stopped printing things as a result.  HP hit the skids and nearly went bankrupt.   The once fabled instrument and printing company has retreated, and with the purchase of COMPAQ has re-emerged as a laptop maker, besting Dell in the dying PC market.

Again, I can see the meeting where the marketing types pitched this (and the guy I met on the ferry pretty much confirmed this is what happened).  They could give away the printers for free, or sell them for way below cost, and then screw the consumer on the back-end by jacking the price on the cartridges.   Rather than sell a piece of hardware that the consumer would use, they would be selling printing services on a cost-per-page basis.

The problem with this model was that no one asked the consumers whether they wanted it or not.  It was just sort of forced upon us.  You bought a new PC in the last decade, and they threw in for "free" a crappy, jam-prone, inkjet cartridge printer with "starter" cartridges that might print a dozen pages before running out of ink.   The cost of all four color cartridges ended up costing more that what you would have paid for a new printer a few years before.

Maybe printing was a dying business - and should have been. When PCs first hit the market, the consumption of paper in the US exploded.  Since you would print out copy after copy of a document, with each revision, you did.   Paper was cheap, and so were printers and ink.  And back then, flickering CRTs didn't display what you would see on paper.  So paper use exploded, and arguably that wasn't a good thing for the environment.

But with large paper-white displays and WYSIWYG formatting, the need to "print out" a document has evaporated.  Even legal documents can be "electronically signed" today, and this is accepted by courts and government agencies. So overnight, the paper business went bust - with many "fine paper" mills retooling themselves to make brown paper for cardboard boxes.  FedEx reinvented itself as a package delivery service for cheaply made Chinese goods, instead of a document delivery service for lawyers.

The change was inevitable, but HP accelerated it. Or, perhaps like with AOL, they knew their business was dying, and like most dying businesses, decided to screw the crap out of their remaining customers to wring out a few extra quarters of profit, before the remaining customer base went screaming for the door.

The point is, somebody thought of that and we noticed.

When people add content to a product and improve it, people notice.  Even little things like two extra flashes on a turn signal.   And the same is true when you gut a product and wring out the last few dollars from it - we notice, because our pocketbooks are emptying out at a faster rate.  And stockholders noticed, when the CEO of HP nearly drove it into the ground.
Newer Post Older Post Home