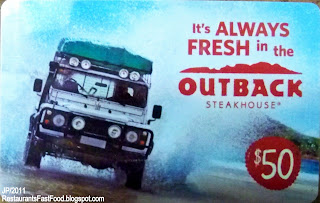 When it comes to meat, fresh is a bad idea.


There is a billboard in our home town for Outback Steak House, that has a picture of a land rover (because, you know, Australia) with the word "FRESH" - as if somehow steaks should be best served fresh.  They are not.

Speaking of Outback Steak House, I have had two experiences there.  The first was with a client who liked to go there.  They served something called a "Bloomin' Onion" which was this onion deep fried, which was as greasy as it sounds.  I am told this is authentic Australia cuisine and everyone in Australia eats this every day with their Vegemite - and I believe this to be true.  They also drink lots of Fosters Lager in large cans, because they are all bang-me-wallaby-down-mate manly Australian men.  I believe this also to be true.

The second time was in Branson, Missouri, which you have to go to at least once in your life, if not for the sake of irony.  Just avoid the deadly "ducks" cruise, if you can.  But the Lawrence Welk the-ater is totally worth the trip, and I say this without irony.   Anyway, they had the original Outback Steak House, which was unrelated to the chain, which licensed the whole thing from them, apparently.   The original one had kangaroo meat, as I recall.   Which brings up a point - when I think of Australia, I think of sheep stations, kangaroos, and Marty's Matchbox Makeovers, but I don't think of steaks or cattle.  Are we being sold a bill-a-bong of goods here?

Of course we are.  And part of this is the myth of "fresh" which like "lite" or "healthy" or "natural" tends not to mean a lot anymore.  It is merely advertising puffery, meaning nothing.  Nuclear waste could be considered "natural" - that doesn't mean it is good for you.  It's probably also "fresh".

Meat in particular, is, oddly enough, not best served fresh.  And this gets kind of gross, so here's your trigger warning.  If you keep reading, you may become vegetarian or worse yet, vegan - or God forbid, a Socialist Democrat.

Alton Brown did an episode about this.  Meat is muscle tissue from animals, and comprises strings of long-chain proteins, which when stimulated in a certain way, contract to cause the muscle to act.  When "fresh" the meat is stringy and tough and not very flavorful.   But as it decomposes, so to speak, these long-chain proteins and connective tissues break down into something tasty, which is why the vultures wait until that flattened squirrel has aged a day or two on the hot tarmac before snacking on it.

Anyway, it has been long known that in order to bring out the best flavor in meat, you have to age it or "hang it" and in the restaurants and butcher shops in New York, they would hang meat until it turned brown, sometimes with green slime on it.   Only when it was getting ripe, was it good enough to be "New York Strip Steak" or whatever.

If you see a steak in the grocery store - or hamburger - that is starting to turn brown, don't pass it up in favor of a "red meat" product - brown town may be where you want to be.  Those pesky long-chain proteins and connective tissue are breaking down and the flavor is actually better (and maybe more digestible to boot).

My racist grandmother, when she moved from Larchmont, New York (hometown of AOC, not the Bronx!) to Kerrville, Texas, complained about the meat.  "They have nothing here but baby beef!" she complained, "they don't let it age, like in New York!"   Bear in mind, she was born and raised in Austin, Texas, so she was hardly a complaining New Yorker.  But having had aged beef and then "fresh" she knew which was better.

But knowing all of this, I get a chuckle when I drive by this billboard for Outback Steakhouse, which proclaims two untruths, in my mind.  First, that Australia is somehow famous for steaks, and second that somehow a "fresh" steak is better than an aged one.

So what's the point of all this?  Well, that advertisements lie, of course, and use "puffery" language that means nothing, in legal terms, and often means the opposite of what it should mean.  People bite on the word "Fresh" like they bite on the word "Free" - assuming it is better than the alternative.   "Fresh" is the new "Natural" of today, implying farm-to-market and a whole host of other myths.

But often, it means nothing.  And in some instances, it is utter nonsense.   You really don't want fresh meat.
Newer Post Older Post Home