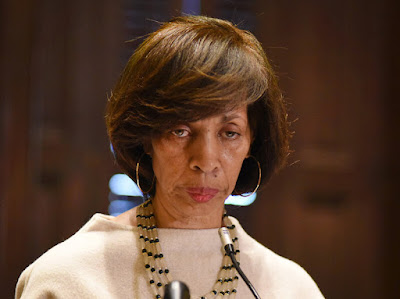 Saying the other guy is always wrong is what got us into the situation we are in today.   We cannot work together unless we realize that each side has a point to be made.


The Democratic Demolition Derby continues, with each candidate trying to pander more than the other by offering more and more "free stuff" to the population of the wealthiest country on the planet, as well as wallowing in the pigsty of Trump Hate.   Hey, it's fun to wallow - we all do it.   But it never really accomplishes much.

The Democrats, as I noted before, are playing the childhood game of "Mr. Opposite" - which was a stupid game that only moronic children would play.   It was a twisted version of "Mother May I?" where instead, one child would say, "I'm going do do this" and the other child would have to do the opposite.  So one child puts on a shirt, and the other has to put his on backwards, or try to wear his pants over his head.   Of course, the game always comes to a sad conclusion when the child who started the game (usually a psychopath in training) says, "Well, I'm not going to jump off the roof the garage!" and the whole thing ends up in the emergency room.

Like I said, it is a stupid game to play, and if you are goaded into playing "Mr. Opposite" just walk away.  And by the way, many adults play this game as well.  I know more than one "anti-materialistic" ex-hippie who drove his life into the ground because it was the "opposite" of what his parents or "the establishment" did.  It's OK to change your mind about these things, particularly before you jump off the garage roof.

But getting back to Trump, he is obviously a disturbed person.   But that doesn't mean he's entirely wrong about everything.   Sadly, this game of "Mr. Opposite" with politics has been going on a long time.   Democrats shouted down George Bush's immigration reform plan, which arguably would be more humane than what is going on today - and likely would have solved many of the festering problems in our immigration system.  But his own party shouted it down, because, you know, Republicans, and anything with the word "reform" in it, is shouted down.  Democrats, and a few rational Republicans at the time, could have banded together to make this work - they chose partisan politics instead, denying the President a "win" and the country a win as well.   Like I said, "Mr. Opposite" is a stupid game.

Speaking of immigration reform, let's recall that it was Ronald Reagan who pushed through and signed the immigration reform bill, which included "amnesty" for illegals residing in the States, during his tenure.   If you asked a Republican today, they will either claim that this never happened, or that  Reagan was "too liberal" - much as Democrats are running away from Bill Clinton and even Barack Obama today. Nothing short of Trotsky is good enough for today's crop of "Socialist Democrats" or "Democrat Socialists" or whatever.  But I digress.

The immigration thing - or "migration" - is going on worldwide.   Conditions in the most of the world are very, very bad.   People have problems worse than student loans - if you can believe that!  Some are starving.  Others are being persecuted.  Others are being slaughtered.   Western countries are the last haven for the vast majority of the world, and since most Western countries have humanitarian values and welcome refugees and asylum-seekers, people are flocking worldwide, largely South to North (with the exception of Australia, which has its own little offshore detention camp) to seek a better life.   You can't blame them for trying this.

Thus, Trump is not imagining an "invasion" even if his choice of words is poor.  We never had these "caravans" until recent years.   And the way our laws are structured, if you can make it to the border and say the word "asylum!" you are in the system for at least a few years until the courts can hear your plea.   And for many, that is all they want - a temporary reprieve from privation and a chance to make a few dollars under the table, and perhaps even to fall off the radar and stay in the USA or Western Europe or Australia or whatever country they can make it to.  Beats being killed, right?

What is the ultimate cause of this great migration, is a good question that no one is asking.  Is global warming causing climate change, resulting in more people fighting over scarcer and scarcer resources?  Is it the inevitable result of overpopulation, in 3rd world countries - aided and abetted by modern medicine which had successfully eliminated or reduced many tropical diseases and infant mortality?  Is it fundamentalism, spreading religions of hatred and fomenting war?  Is it income inequality driving economic wars that underlay the religious conflicts?

Perhaps yes, to all of the above.  Perhaps all of these reasons for migration are inter-related.  But whatever the cause, the question remains - for the entire Western world, and not just the US - whether we should have an "open borders" policy as proposed by some Democrats, or the current patched-together immigration system that we have today (which can result in uneven, unfair, and even cruel outcomes) or whether we should close the door or raise the bar to immigration?

Many on the Left point the past as an example of the "success" of open borders.  In the 1800's, millions migrated to the United States, and we let them all in, through Ellis Island.  It was written right at the base of the Statue of Liberty!  "Come on in, everyone welcome!"

Well, not exactly.  Our immigration policy in the past was alarmingly like what President Trump (throw up in mouth a bit) is proposing and implementing.   We let our racial and religious prejudices influence our actions back then, as we do today.   The Chinese exclusion act, the anti-Catholic riots (and lynchings), prejudice against the Irish, the back-to-Africa movement, and so on and so forth.  American history is full of Trumpian moments.

Sadly, it seems both Democrats and Republicans want to look back through the rose-colored glasses of "the good old days" and tell us how great things were "back then" and how we've let it all go to hell, because of the other party.   Neither side is right.

The point is - and I did have one - is that we need to discuss how to handle migration into our country.  Pat answers like "open borders" or "abolish ICE" are not answers at all.   The current system is broken, and Trump's proposals are idiotic.   If we had a "means test" for immigrants in the past, our country would be empty today.  Some of the most successful and wealthiest people in the history of the USA came to this country with nary a penny - which was, of course, how they became wealthy, as they understood privation and didn't squander their cash as "native born" Americans often do.

There are other instances where Trump is 1% right, but Democrats refuse to admit to it.  Trump was called "racist" for saying that aid to Puerto Rico would be stolen or wasted by a corrupt government.   And months later, the governor of that island resigns due to, well, corruption.    It is not racist to say that much of the aid was wasted, that the power company is poorly run and rife with corruption, that the island government is padded out with make-work and no-show jobs awarded to cronies.  Trump was at least partly right about that.

Similarly, his comments about Chicago and Baltimore are decried as racist.  Yet both cities struggle with staggering crime rates and government corruption.  The mayor of Baltimore (shown above) was tossed out of office for selling her poorly written "Healthy Holly" books to the school system, most of which were never delivered (she was paid anyway).   This is corruption of the worst sort - of course, not on a scale of Trump's.  Moral: If you are going to take cash under the table, open a hotel next door to the White House.

Regardless of Trump's malfeasance, he wasn't wrong when he said these are troubled cities.   And yet the mayor of yet another festering shithole - Newark, New Jersey - has the balls to run for President and claim he has ideas to fix everything, when he can't even fix his crime-ridden hometown.

The solution to all of this by "Socialist Democrats"?   Let everyone out of prison.  Let felons vote.  Eliminate bail entirely.  Castigate the Police.  Maybe these ideas will sell in the ghettos of Baltimore, Newark, and Chicago, but I doubt even there.  You see, most victims of crime in these neighborhoods are the residents of those neighborhoods.   The lady who is beaten nearly to death for her Social Security check by local gang members isn't all-too-keen on a "soft on crime" platform.  She refuses to testify against her attackers not because she hates the police, but knows they can't protect her.

Moreover, it isn't a winning strategy.   Voter turnout in such neighborhoods is ridiculously low.  You can blame gerrymandering or "vote suppression" all you want, poor people tend not to vote.   Meanwhile, old people do, and despite all this talk about Millennials taking over, the baby boomers are still a force to be reckoned with - they're still alive, they have money, and they vote reliably.   And at their age, they are as afraid of crime and criminals as anyone else is.  Democrats are reading the tea leaves all wrong here - remember it was Nixon who won in 1968 on a "Law and Order" platform.

And the "Millennial" protesting for prison reform is one bicycle-being-stolen away from becoming a Republican.  We talk about the next generation as if they were an homongenous group - all left-leaning, all antifa protesters, all decrying garbage disposals and plastic straws.   But the reality is, the people these "antifa" protesters are fighting are not from an older generation, but from their own.

Sadly, the Democrats seem hell-bent on losing.  In fact, losing is the new winning, in their mind.  Some of the biggest "stars" in the Democratic party are not winners, but people who lost elections.  "Beto" O'Rourke is famous not for winning an election, but for losing one.  In Georgia, our own Stacey Abrams has said she is open to being a VP on the Democratic ticket, her qualifications including losing the race for governor.

Meanwhile, the Republicans actually figure out ways to win.    Maybe we should do that, too?

Nah!  It's more fun to lose and then say, "I told you so!" particularly when the economy might melt down a year into the next Presidency.
Newer Post Older Post Home