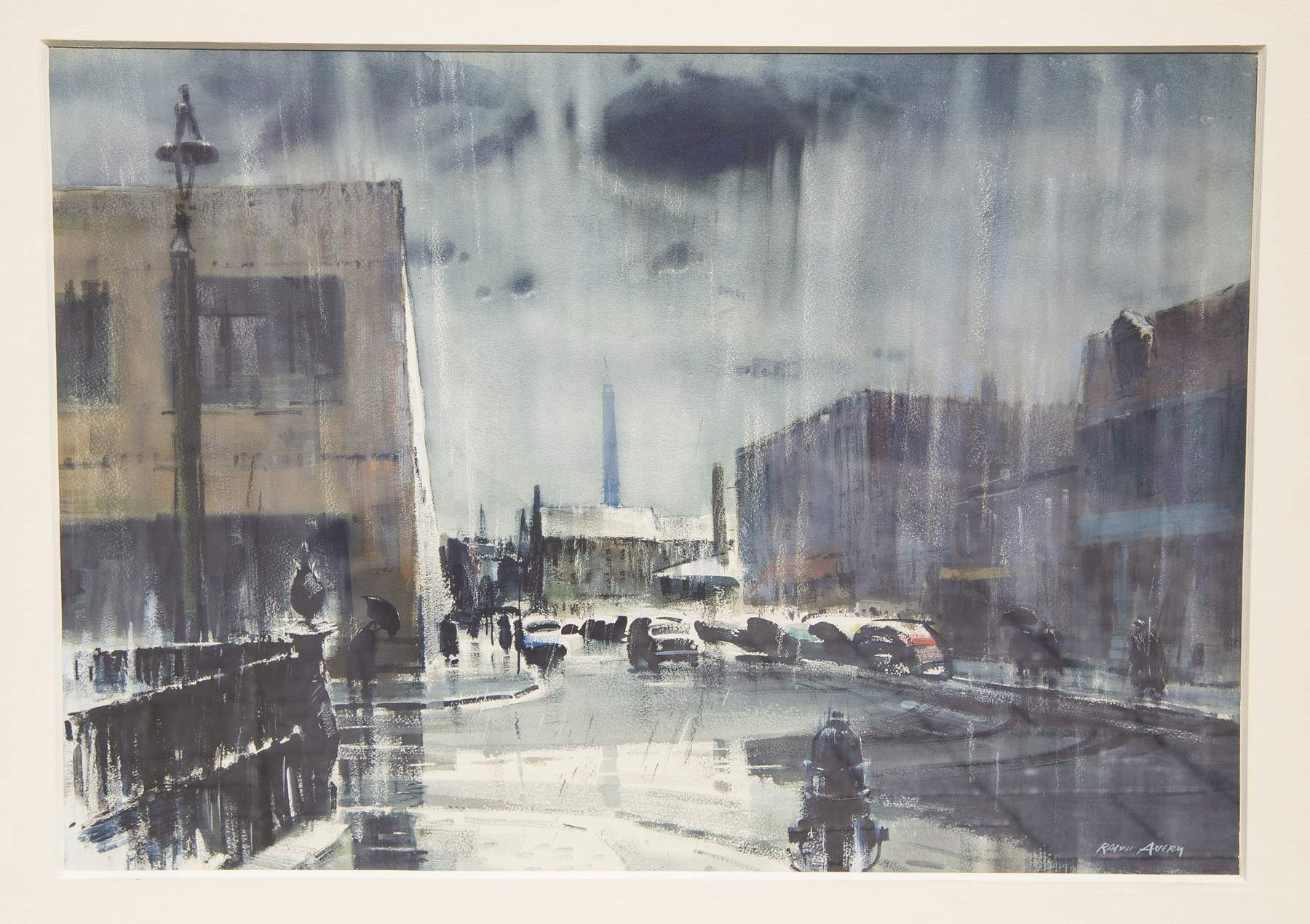 It is good to have "an art" on your walls.  However, don't kid yourself that you are an art collector.


We are about two-thirds the way done with the flooring project. The master bedroom is next.  And then we have to paint the remaining rooms in the house - the paint is nearly 15 years old, dirty, scuffed up, out-of-style, dull.   You have to repaint every so often.

It reminds me of a nice fellow I worked with at the Patent Office.  He is probably long dead by now - he was a big smoker.  He lived alone for decades in an apartment in Arlington, and spent all his money on a new Cadillac every few years, and at Pimlico, betting on horses.  That sounds very sad, but I think he was one of those people who knew exactly what he wanted out of life, and got it.  He wasn't interested in a career, family, or whatnot.  Just driving the caddy and betting on ponies.

Anyway, he was talking to me one day and mentioned that his apartment manager wanted to repaint his apartment.  "Can you imagine that?" he said, "I've been living there for over 20 years, and for some reason, they think it needs a coat of paint!  I told them, 'no thanks!'"  I think he eventually relented and let them paint the place.  But it illustrates that even landlords - who have every incentive to be cheap, realize that a coat of paint is not forever.

But speaking of painting (pardon the pun), when doing this makeover, we've had to remove all the art from the walls, and when we finished, put it back.  Hanging paintings is like rearranging furniture or trying on clothes at the department store - not one of my favorite tasks!  And yet, as I write this, Mark is down at the gallery.... hanging paintings.   I was there yesterday, but today, I got a reprieve.

We don't have any fancy or expensive art - that I am aware of.   And art is an interesting thing - like wines, some are so intimidated by it that they have none of it.   You've seen the houses, with the large blank walls with nothing on them, or "an art" as one wag put it - a tiny painting, hung off-center and crooked.

You can have nice artwork without spending a lot of money.  In fact, odds are, you can't afford to spend a lot of money on artwork.   Art is one of those things subject to The Casino Mentality.   The plebes love to read stories in the paper about some painting that the artist sold back in 1935 for $25 now selling at auction for $5 million.  Or better yet, how "one of us little people" strikes it rich when they discover the painting they brought to Antiques Roadshow is actually by long lost artist of the Hudson River School and worth millions.

Plebes love that shit, which is why they buy lottery tickets.

But it is true that some artists' works are worth millions, just as some rare stamps and coins are worth a lot.  I am not sure the winning baseball from this year's World Series is worth millions - but the press reports that every year.   Why would anyone spend that much money on what is, in fact, an ordinary baseball?   Maybe to complete their collection?   It makes no sense to me.

But again, plebe thinking is along these lines - that such-and-such a "rare" item is collectible and thus worth a lot of money.  And who knows?  Maybe you too, will strike it rich with collectible lottery - better hang on to those Beanie Babies and Elvis Plates - any day now, their value will shoot up!

By the way, there are a lot of cons out there involving collectibles.   People put up fake auctions on eBay, literally asking millions of dollars for "museum quality" Beanie Babies.  They then use these as price references to sell a similar doll for "only" a few thousand dollars to unsuspecting rubes.   The collector mentality is dangerous to your pocketbook.  Just because something is rare, doesn't make it valuable!

But the sad fact of the matter is that the crap that most of us own isn't going to be worth bubkis, in our time or even that of our grandchildren.   Yes, that meticulously restored numbers-matching Hemi Cuda convertible may bring a million at auction - when some clueless dot-com dweeb decides to blow his wad.   But no, your rusted-out slant-six Charger with three-on-the tree isn't going to be worth anything, anytime, ever.  The cost of restoration would exceed its market value for some time to come!

Part of the problem is, of course, that art collectors sometimes drive the market.  Peggy Guggenheim bought a lot of works before they were collectible - such as Jackson Pollack, who sold her his drop cloths.   By dint of her buying his work, it became collectible, valuable, and made Pollack famous.  It is an interesting analogy to the financial world - people with vast amounts of money can often drive markets, sometimes merely by investing in them.

When it comes to art, for the rest of us, a better idea is to find things you like to look at, and don't worry about making an "investment."    Buying original paintings is often out of the question for most of us, unless they are from someone we know, a local artist, or some unknown.   Prints are usually the order of the day for us middle-class folks.

The picture above is a print my Mother bought back in 1965, entitled "Fall, Third Ward" by Ralph Avery.   It is one of several gloomy pictures he did of the Rochester area.  He also painted more lively artwork for Reader's Digest and The Saturday Evening Post.   We had taken this down from the wall, and have not put it back up.  Not only is it gloomy (much as Central New York often is) it is faded a bit.  The original watercolor recently sold for $1650 according to one auction site.  A fellow Central New Yorker is offering a similar print to mine on eBay for $150 - with no takers.   In looking at the original painting online, I realized how much detail and color was lost in the print, particularly as it has faded over time.

On our cruise to Alaska two years ago, they had an art show on the ship - most cruise lines do this, as they have a captive audience.  They usually have a reception, with free (inexpensive) champagne, and some fairly recent artists who you likely have never heard of. The art is interesting, although sometimes a little gimmicky, and the prices are usually in the low four-figures - small enough to charge on your credit card, large enough for you to take it seriously as "art".   We took a pass, as I didn't see anything I liked looking at.

And for me, art is that way.  We were driving through Ithaca, New York, and saw a sign that said "Art Garage Sale!" and leaning up against a fire hydrant was this painting.  I locked on the brakes.  For whatever reason, it spoke to me, and I had to have it.  The artist sold it to me for $100 or $200 as I recall - she was desperate for money at the time. I kind of felt bad, paying so little for it.  I bought three or four more of her paintings.  She had just returned from Italy, and brought them back in her luggage, rolled up.

Will these ever be collectible?  Hell, no, unless I stumbled upon some unsung genius who will be lauded after their death.  And oftentimes, this is what happens.  We visited a museum in Mississippi, which showcased the pottery of "The Mad Potter of Biloxi" George Ohr.  Ohr was never famous in his lifetime, but after he died, his heirs inherited trunks of his pottery.  They managed to get some articles written about him in major newspapers, lauding this unsung artist, and they slowly sold off a few pieces as demand ramped up - sort of like a penny stock pump 'n dump - and it's been done before, too, with other photographers, painters, sculptors, and whatnot.

Good old market forces at work!  If you can inherit a trove of artwork from some unknown - that is essentially worthless - you can increase its value by having articles written about the artist in the New York Times, or perhaps a documentary movie or whatever.   If you can crank up demand, and control the supply, well, you can become rich.   You needn't be a Guggenheim!

So find a broken-down artist friend, buy up all their works for cheap, so they can feed their heroin habit.  When they die tragically, start a PR campaign to profile the misunderstood artist - and profit!

This is not to say people have done this intentionally, only that was the way it worked out.  Most artists don't profit from their works in their lifetime, except perhaps, Jeff Koons, who some would argue is not an artist at all.  I have an old vacuum cleaner and some Plexiglas, why can't I be a millionaire?   It would be funny, wouldn't it, if the cleaning lady at MoMA took one of his vacuum cleaner "art" objects out of its case, after hours, and cleaned the gallery with it - never realizing it was art - and then putting it back in place afterwords, with no one knowing.  Every night for a year.

Sometimes abstract art gets too abstract.

But getting back to plebe art, chances are, you will spend more on framing than on art itself.  When we bought our house in Jekyll, it had a long, long hallway going to the master bedroom. Lots of blank space and nothing on it.   We had a calendar of travel posters from the 1930's which was published by the Smithsonian, printed on archival paper.  We took it to a framing shop and they matted and framed all 12 prints, which we used to line the hall.   They look great, and cost little - well, the framing cost a bit, to be sure!

We were in Maine and visited a gallery that had a beautiful original painting of the coast.  The artist wanted over $5000 for the original painting and $500 for a lithograph print.  Mark's brother surprised us with a poster copy ($25) which I think we spent over $300 having framed.  It is a large piece and it looks great, and reminds us of that visit every time we look at it.

The point is, the idea that art is "unaffordable" is bunk.  Art needn't cost a lot of money, and you should buy what you like to look at, rather than something sold to you on the premise that it is "valuable" or might someday be valuable.

Whether you like how something looks and enjoy looking at it, is more important - as you will have to look at it, for years at a time.  And in that regard, with apologies to Mr. Avery, we have taken down the dreary Rochester print and put it in a closet for now.   It may be art, but it is not pleasant to look at, unless one wants to be in a dark mood.
Newer Post Older Post Home