Some Side Hustle Ideas 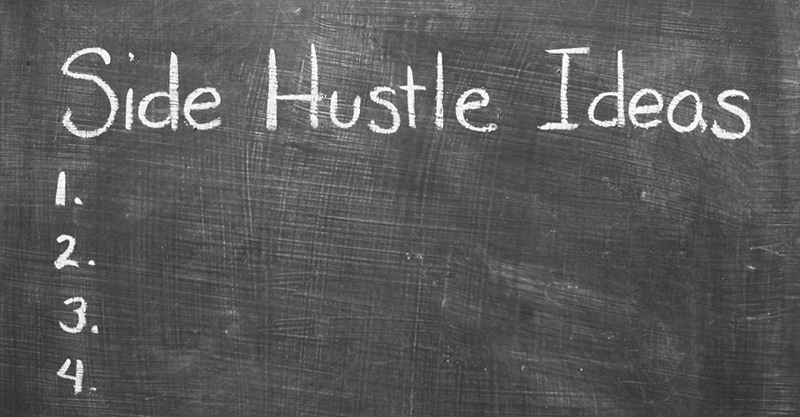 Creating a side hustle isn't difficult, just think of something illegal, then make an app for it.

This whole "side hustle" thing has got me to thinking.  Why can't I become an internet billionaire by taking something that's illegal and then making an app for it, for the smartphone and then just skim a little bit off the top of each transaction? Then I can go public in an IPO and claim this is "technology" and sell billions of dollars of stock and retire.  It's worth a shot.

Here are some of my ideas:

1. Foodber:  This is sort of a cross between Uber and Airbnb.  As I noted in another posting, a lot of people don't like to make their own food or are unable to do so.  Meanwhile, your kitchen is sitting around unused most of the day. Why not take your cooking skills and put them to use as a side hustle?

Even if you have no cooking skills, who cares?  Have you eaten at any of these "fast-casual" or fast-food restaurants, lately?  It is all just crap that comes out of bag, reheated by teenagers - possibly your own kids!  Just buy some frozen entrees and microwave them - who's to notice?  Not the types of people who look at restaurants in terms of calories per buck, that's for sure!

Put a few cafe tables in your living room - or perhaps on your back deck - and then start a-cooking! Put a menu board out front and a velvet rope on the front porch. Maybe your kids can make a little extra cash valet parking cars as well. Your wife could act as bartender, and you can use the family room for the bar area.

Since you don't have to do those messy things like getting a liquor license, health inspection, insurance, fire exits, or commercial zoning, you can save an awful lot of money and charge prices that are less than ordinary restaurants. Patrons can find your home-restaurant through the Foodber app, which naturally would also handle payments for you and of course, take a little skim (25%) off the top - for me, of course.

You just have to hope the authorities don't shut you down or the neighbors complain. And hopefully, you don't get sued for food poisoning or if a patron slips on your sidewalk, as your homeowner's insurance won't cover that.  But helpfully, we here at Foodber will provide you with a $100,000 liability policy!

2. Pimpber: Think about it. Your wife's vagina is sitting around most of the day not being used for anything. You could rent this out and have a nice steady stream of income.

The Pimpber app would hook you up with potential clients and also handle payments through their credit cards, laundry the money overseas, and pay you back in Bitcoin so it was not traceable.

Of course this need not be limited to just your wife. If you have children around the house who are of legal age, they can also be put to use in this side "hustle" as well!

Of course, my skim off the top would be a little higher.   Bitch!  Where's my money?

3. Drugber:  This is the ultimate side hustle for many inner-city youths.  Drugber can put you in touch with international drug cartels who can ship massive quantities of cocaine, methamphetamine, heroin, and of course, marijuana, right to your door. You can then resell this for a profit, again using your family members as sales people. I'm sure your teenage kids will have no trouble unloading some weed at the local high school.

Not only that, you can work this as an MLM scheme!  You can sell "distributorships" of your own to other people and assign them to different territories. Just make sure the territories don't overlap with other drug dealers or you could find yourself in a bit of a gang war!

4.  Churchber:  This was Mr. See's idea.   Why not set up an evangelical church in your own home?  In addition to all the money you make from tithing parishioners, you get tax-exempt status on your property.   The neighbors might get a little pissy about all the cars parked on the lawn, though.  But hey, a church in your home - it worked for Westboro Baptist, right?

The Churchber app would help traveling evangelicals find a place to worship, right in your own home!  Since you don't need any religious training to become a Baptist minister (or indeed, even have read the bible, as Jim Bakker later confessed) you need not worry about being "qualified" to lead a congregation.

Just spout some gibberish and claim to be speaking in tongues. Or randomly select a bible verse - preferably a sentence fragment - and then free-associate about it, hinting that perhaps God is displeased with his creation.

In place of a collection plate, however, parishioners would tithe with their cell phones, at which point, I get my "taste" of the action!

Illegal? Well hell yes, but so is driving a taxi without a chauffeur's license, a taxi medallion, and commercial registration and insurance for your vehicle.

It is no worse than turning a residential neighborhood into a hotel zone, without bothering with messy zoning commission hearings first, paying the bed tax, or getting proper licensing, inspections, hard-wired smoke detectors, emergency exits, and a host of other regulations that real hotels have to comply with.

These are just a few ideas I came up with on the spur of the moment. The possibilities are endless. Just think of something illegal and then make an app for it.

OK, my sense of humor is pretty lame.  But then again, isn't this the point of these "tech-that-are-not-tech" companies?  They often prey upon the desperation of people to make an extra buck, because a lot of people desperately need to make an extra buck to dig themselves out of debt, including student loan debt.  Or maybe they can't afford housing in places like California, so they drive for Uber all night long, and end up tired and wiped out the next day at their regular job.

By the way - and this is probably illegal today - when I was working at GM and UTC, it was against company rules to be "moonlighting" at another job.  You could be fired if they found out.   They wanted your entire productive output, not some phone-it-in effort after you've been delivering pizzas or driving a cab all night long.

Not only that, they didn't want competition.   Frank Lloyd Wright was a "side hustler" - cheating his employer by designing houses "on the side" for cash clients.    Of course, his employer found out and fired him.   But he ended up doing pretty well, nevertheless.

And I have side-hustled myself!  When I was in college, I was pretty poor, and I worked several "side" jobs, often at the same time - it was exhausting work.  Delivering pizzas, tutoring calculus, working at United Parcel until four in the morning.  Going to school at night and sometimes even working my full-time job at Carrier!  I learned to like coffee about then.  But I was young and when you are young you can do those sort of things.

And yes, I have rented out our condos in Florida on VRBO - although by the month, not by the night.  And in retrospect, we could have done far better with the New York property if we had rented out the "in-law suite" to a college student, or finished off the apartment in the barn and rented that out as well.   The entire house could have been rented out during Cornell's graduation weekend - entire families would come up to see their son/daughter graduate.

But, stupidly, we were concerned about our "things" being disturbed, which in retrospect, was idiotic.  We are not talking about museum-quality collectibles, but just the ordinary crap that people own.  Opportunities missed, because we worried about the material.

Of course, in regulation-heavy New York State, we would have likely run afoul of the authorities - which is why Airbnb isn't legal in Manhattan.  So we worried about that.  Turns out, the best "side hustle" was to sell the place and pay off all our debts and retire, debt-free.  That is the ultimate side-hustle - living off investments.

But there is another aspect to this "side hustle" thing that is disturbing.  When I was a kid, such things didn't exist, unless you were desperately poor.  Middle-class people didn't have two jobs.  In fact, most Mothers didn't work at all.  Over the years, women entered the workplace - nearly doubling the working population within a decade.  Oddly enough, the workplace absorbed all of these folks with no problem.  Dual incomes became the new norm, and maybe one reason our country became more productive and more wealthy - perhaps.

That is an interesting thing to note, to the naysayers who say that automation is going to take away all our jobs over time - more and more people are working today and yet the workplace absorbs them.  And the same is true with these "side hustles" - there seems to be no shortage of people wanting to take these crappy jobs, just yet.

But that may be about to change.  Wages are going up - often organically, sometimes by government fiat in places like Seattle, Washington.  Workers are going out on strike more often.  Uber drivers are demanding more pay (even as their company loses money) and to be treated as "employees" and not go-fuck-yourself "contractors".   The endless supply of desperate people who need to make an extra buck may start to dry up, in this era of record low unemployment.   We might just have to let those Mexicans back in, Mr. Trump!

But all that being said, I wonder sometimes if we haven't lost something here. Maybe it was "equality" when women entered the workplace - but before too long, two incomes was no longer an option, but a mandate to survive, at a middle-class income.   Today, two incomes are not enough - you need three or four, perhaps, as each spouse has a job and a "side hustle" as well. And financial "gurus" helpfully suggest this is the way to solve your financial problems, or to be able to afford a new car - by side-hustling.

Again, I've done it.  Granted, at age 25, I had the energy, and indeed, it was probably a better use of my time to work a side job than to hang out with my brain-dead drug-addled friends, smoking pot and grousing about how unfair life was.   In fact, I was happier working than slacking.

It makes me sad to think of these legions of young men in their 20's and 30's who are living in their parents' basements, smoking pot and masturbating all day long, playing video games, polishing their guns and katanas, and waiting for life to begin, when their most productive years are passing them by.  These kids don't need a side-hustle, they need a hustle.   I wonder what excuse they give their parents for not getting a job, in this era of low unemployment?  I wonder what excuse the parents make to themselves for not tossing junior out on his ass?