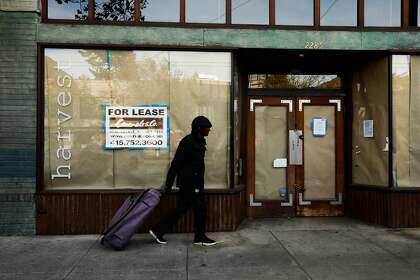 Why do some storefronts sit empty for years at a time?


In our small town, they keep putting up more retail space.  It seems every month, another dreary strip mall goes in, anchored by one tenant, with the rest of the space listed as "Available!"   This, after the downtown portion (like most older towns) sits desolate and abandoned, with just as many empty store fronts available.

What is going on?  Why aren't these places being rented out?   Well, some are rented, but only for a year or so.  The rents are so high that the small businesses can't pay the overhead based on their limited sales.  Or, the landlord, seeing the business successful, raises the rent to astronomical prices.  The tenant leaves and the landlord - or a friend of his - tries to "take over" the business by running a similar store or restaurant in the same space.   Usually it fails within months.

A recent article in The Atlantic opines that one reason so many storefronts sit empty, with astronomical price tags for monthly rent, is that landlords are hoping to win the lottery, and that a big bank or other "deep pocket" will decide to open an ATM branch in that space, and pay top dollar.  Or maybe a McDonald's?   By waiting around for the "whale" tenant, they can score big time, and have decades (they hope) of rental payments.   In the meantime, the property sits empty for years at a time, bringing down neighborhood values.  The author opines that "pop up" stores are the solution.  I am not so sure.

In an earlier posting, I opined there really is no such thing as unaffordable housing - that the market eventually corrects itself, and people reach a point where they stop paying.  The problem is, of course, that "eventually" can take months, if not years.  So long as tenants keep paying, landlords will keep charging.  But even in places like New York City, you can't just keep raising rents forever - people eventually break down and move to Jersey City.

The reason why rents don't track demand in real-time are many.  And part of the problem is the race-to-the-bottom. There is more money to be made in luxury housing (a lot more) than in middle-class or low-income housing.  So a builder is incentivized to build luxury housing, which becomes a glut on the market, as we've seen in so many markets.   Meanwhile, the middle-class and poor have to struggle to find a place that is affordable.   But eventually, something has to give.

I recounted before how in 1989 the market in the DC area burst.  Back then, they were building mini-mansions in places like Woodbridge.   And quickly, those mini-mansions turned into upscale ghettos, as no one wanted to live there (back then, anyway) and foreclosed-upon monster houses were rented out to a dozen tenants at a time.

What was upscale housing turns into tenements over time, as the upscale people move on to newer, greener, pastures.  And this has been an historical trend.  In the 1800's, rich people actually lived in cities, until the air became so unhealthy and conditions dire.   They moved uptown or to new suburbs, and their former mansions and town houses, turned into apartment buildings and tenement slums.  And over time, what were the "suburbs" became part of a greater urban area, and the wealthy moved yet again, further out, aided by successively new technologies in transportation (the trolley, the commuter train, the automobile).

In recent years, however, the cities are being rediscovered by a newer, younger, wealthier generation, who want some place to live that is "close in" and near everything.  Or, in the case of silicon valley, many are doing the reverse-commute - driving from San Francisco to the valley for work, and returning home to the city at night.  Needless to say, this has disrupted the pattern.   Suburban areas devolve into ring-city ghettos.

But getting back to unaffordable housing and unaffordable retail space, eventually something has to give.  A landlord cannot make money from empty storefronts - with no rent coming in, and property taxes, utilities, insurance, and repairs to make (even on an empty property - particularly on an empty property), the landlord will run out of money before he runs out of patience.  It make take a month, a year, or even several years, but eventually, he has to cash it all in and sell the property (or have it foreclosed upon) and let someone else take over - someone who will have a lower cost basis and can rent it out for cheap.

There are, of course, exceptions to this rule.  When I lived near Washington DC, I recall reading about slumlords who owned blocks and blocks of homes that were unoccupied and they never paid taxes on.   The city - poorly managed - never bothered to foreclose on these properties, or if they did, the owner would quickly pay up the arrears - on that one property - and keep the game going.   The landlord (or more precisely, property owner, as you can't be a landlord without tenants) was "sitting" on these properties, which were eyesores and uninhabitable.   He was hoping to wait it out until the neighborhood was revitalized or gentrified, and then sell the properties to a developer (who would tear them down and build town homes) and then he could make a tidy profit.

Nice work if you can get it, and easy to do in a corrupt and poorly managed city like Washington, DC, where they are so overwhelmed by unpaid property taxes that you can hold a place like that for years and not worry about losing it to a tax sale auction.

This is an outrage! you say, Sumptin' should be done about it!  And some jurisdictions do - reclaiming properties for back taxes.   And then people get outraged over that.    This click-bait article from CBS news, for example, says that people are "losing their homes" because they failed to pay $8.50 in back property taxes.   But scratch the surface and you realize that a landlord lost a house he was renting out because he failed to pay the entire balance due for several years in a row.   Do you feel as sorry for a landlord?

Granted, the guy was living in Israel, but you know, as a property owner, I log onto my county's property tax website every year (or six months, for Fairfax County) and pay the bill online and check to see that it is paid.  I put a reminder on Google Calendar, and my phone will beep and buzz and nag me until I pay the damn taxes and reset the reminder for next year.   In order to lose a property to tax sale, you have to not pay your taxes for several years in a row, and ignore warning after warning.  By the way, on these County tax websites, you can check the tax bills of all your neighbors, what their properties were assessed for, and whether they paid their taxes on time or not.   If you create an account (as some sites allow you to do) you can change your billing address and other contact information.  There is really no reason to not be aware of a tax bill.

And even after a tax sale, you may have the right of redemption, but there is a limited time period in which to claim this right - and you may have to pay off the guy who bought the property at tax auction, as well as some late fees and other fees.   Bear in mind, too, that a tax sale does not wipe out the mortgage balance owed, which is still secured by a lien on the property.   So the buyer of the property isn't getting a free house, if it is encumbered by a mortgage.  As a result, he would have to pay off the existing mortgage or get a new one.

But it pays to keep track of these things.  There was a famous case in San Francisco, where a right-of-way in a fancy housing development was deeded to the HOA, who failed to pay taxes on it.  A wily investor bought the land at tax auction and then ransomed it back to the HOA.  Perfectly legal, although maybe not perfectly nice.   You have to have your shit together, and Condo boards and HOAs usually don't (but they can tell you what color to paint your door!).

But once again, I digress, but not too far.   Some argue that property taxes should be levied on land alone and not on improvements.  Under this theory, a slumlord with an abandoned house has the same tax bill as the neighbor who fixed his house up and made it into a showplace.   This incentivizes the slumlord to sell his property and further incentivizes others to improve their properties.   The existing system, which penalizes those who maintain or improves their homes, also serves to enable slumlords and people who "sit" on abandoned properties and empty storefronts, hoping for someone to come along with a fat checkbook.

Tax policy can help.  In Vancouver and Toronto, there are a lot of houses being bought as speculative investments.   As I understand it, new taxes are being levied on unoccupied houses and houses bought as speculative investments.   The results are interesting - the housing market is cooling down, and some wily investors are renting out the pool cabana or even the whole mansion to college students, to avoid the punishing taxes.   The result is positive - some people who couldn't afford to live there, can now afford to.   And the rush to speculate on houses is being attenuated - somewhat.

I believe that one big problem with retail today is the high cost of retail space.   Despite the fact that so much retail space is vacant, landlords want punishing rents for basic storefront business locations.  As a result, a tenant has to have a high cash-flow in the first year, just to survive.   There is no place for the sleepy, small-town businesses we had in the past.  Today it is go big, or go fuck yourself.  You either have to be Walmart or nothing.   There is no place anymore for the vacuum cleaner repair man or the guy who fixed lawn mowers.   Even assuming he could have customers, he can't afford the rent on a shop anymore.

But like I said, that could change.  In the next recession, a lot of these landlords "sitting" on properties, hoping for that whale tenant, will run out of money and sell out.  When that happens, a lot of retail space could hit the market for cheap, and that could change the dynamics of modern retailing, just as every dot-com boom-and-bust produces cheap infrastructure for the next generation of tech companies to piggyback from.

Perhaps!   We'll see.   But I am not sure that "popup" stores are the answer, as The Atlantic stipulates.
Newer Post Older Post Home