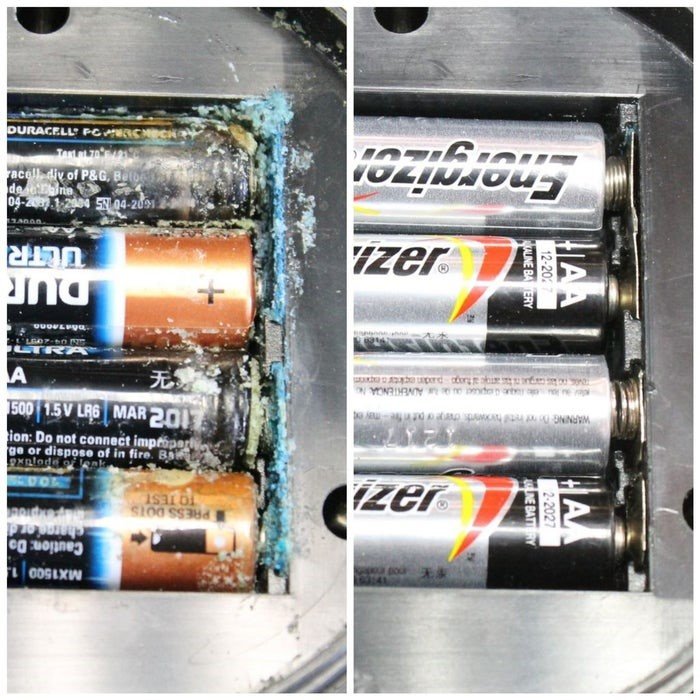 When did alkaline batteries start to leak?


When I was a kid, they had two kinds of batteries, Ray-O-Vac and Ever-Ready.   These were non-alkaline batteries and didn't last very long in flashlights and toys.  We constantly asked Mom and Dad for more batteries, and they would reply, "Didn't I just buy you new batteries last year?  Use those!"

Back then, alkaline batteries were a new thing - the Duracell "Copper Top" was just being introduced, and promised to offer battery life that was three or four times that of the older kind.   That, and they wouldn't leak.   Yes, those old Ray-O-Vacs and Ever-Readys would leak this brown goo inside the battery compartment of your toys or flashlights.   And often, this goo would ruin the item in question, as it corroded the contacts of the battery compartment.   Alkaline batteries never seemed to have this problem.

Recently, it seems that Alkaline batteries are leaking more than their predecessors, and leaking something far more caustic as well - a white powdery substance.  I have had several flashlights and electronic gizmos go to the graveyard over leaky batteries.  In some instances, the device can be repaired if I sand off the contacts with an emery board and apply a light coating of WD-40.   In other cases, the white powdery stuff eats through the contacts and even wiring, and sometimes seems to degrade the circuit boards.  Remote controls for the garage door opener seem to be particularly affected.

This sort of had me puzzled until today.  I ordered a new keypad lock for the trailer, and it uses "penlight batteries" to drive the mechanism.   On the website was the photo above and the following description:

Ever since we started producing keyless entry locks (NE and EM) we have noticed that some batteries corrode more than others. We also learned some provide more consistent electrical current than other batteries.
We have found Energizers perform the best for our keyless application, and most of us have switched all our other battery-operated products to Energizers as well. Energizers claim to not leak, and we believe them.
Batteries corrode (get white fuzz) because they can leak. The white fuzz is potassium carbonate and accumulates on the negative side of the battery. Essentially, the chemical reaction in an alkaline battery creates hydrogen gas. The gas begins to build pressure and can leak out causing the potassium carbonate to materialize.
Therefore, a non-leaking battery makes a big difference. It is also worth mentioning that a hot environment will increase the gas pressure in a battery. For you science enthusiasts you may recall the Ideal Gas Law that states pressure is directly related to temperature. In other words, if you are located in a very hot environment and using lower quality batteries you are at higher risk of battery leakage.
Here are a few ways to avoid corroded batteries.
This was interesting information. I realize, in retrospect, that moving to the South may have something to do with it.  As the batteries get older, they tend to outgas more.  And in the heat of the South, particularly in a parked car, the batteries can build up pressure and ooze out this white powder, which in turn messes everything up.

I had always been a fan of the "coppertop" battery, and in retrospect, I realize that it was the look of the battery that appealed to me - it looked more serious and technical, compared to the garish "Energizers" (the successor to the Every-Ready.   Ray-O-Vac is still around, but I think the brand was sold to China).   So I may switch to Energizers.

Speaking of China, I wonder if that is part of the problem as well.  Perhaps the seals on alkaline batteries are not as well-made as in the past, in an effort to cut costs.   We all want cheap stuff, to be sure, but when a battery ruins your electronics, maybe cheap is too cheap.

We've gotten into the habit of removing batteries from everything when we go on vacation or are not going to use something for a long period of time.  And I get in the habit of changing batteries on some items, regularly.   I have some sprinkler timers, for example, that I change the batteries on, every year, even if they are still "good."

It is funny, but we put new 8 volt batteries in the golf cart (which means our $300 cart is up to nearly three grand) and they leak a lot less acid than the older batteries, which were near the end of their lives.  I suspect that one way to tell if your golf cart battery is shot is whether it is boiling out acid when it charges.   You can keep adding water, but this just dilutes the acid further, and more boils out.  Maybe it is the same effect with the Alkaline batteries - they seem to leak powder near the end of their service lives.

A reader suggests I invest in rechargeable Lithium-Ion batteries.  I have a pair of these for my bicycle headlights, and you have to remove them and put them in a special charger.  They are slightly larger than an AA battery.   It is a hassle to have to recharge these, but on the other hand, they seem to hold a charge for a year or more.   They make Lithium-Ion batteries in regular sizes, from what I understand, and I will have to look into this before I waste any more money on "coppertops" that leak crap all over my electronic gadgets.  Most "rechargeables" are Nickle-metal hydride batteries, though.

Speaking of Lithium-Ion batteries, I looked into getting these for my golf cart, but realized that this application is still at the experimental stage.  Only one company I could find sold these batteries in a "kit" for golf carts that was plug-and-play (the same form factor, wiring, etc.) and it cost thousands of dollars.   There were some folks on eBay selling new or used Chevy Volt or Prius battery packs with the notation that they could be used in your golf cart - but you would have to experiment with the mounting, wiring, charging, and whatnot.  Those battery packs are very complex, and feature cooling fans to keep the temperatures down.   Not for the feint of heart.  I suspect, however, that in a few years, most golf carts will go this route from the factory.  The carts themselves last for decades (Mine is a 1994 model) so it would be worthwhile to put Lithium-Ion batteries in them.  Currently, most golf courses dump their carts every few years, once the Lead-Acid batteries die.  It is kind of wasteful!

I guess within a few years, batteries, like incandescent light bulbs, will be a thing of the past.  I still have a box filled with old incandescent and CFL lights in the garage - replaced with LED lights long ago.   Should I use them up?  Throw them away?  Sell them to some end-times survivalist who doesn't want "gub-ment" mandated light bulbs?  Or hang onto them until they become rare and precious collectibles?   Just kidding.  Throw them out.

I suspect in a decade the idea of removable light bulbs and removable batteries will be obsolete.  Why spend the extra dollars making something that lasts the life of the appliance removable?   Your remote control for your TeeVee will recharge on an inductive pad built-in to your overstuffed sectional sofa, or perhaps even via a small solar panel.   Who knows?  But removable batteries - that is so 2020.

UPDATE:  Searching online for rechargeable AAA batteries is interesting.  A lot of companies (mostly Chinese) are advertising on eBay and Amazon, but you have to be careful.  You search on "Lithium-Ion" and the results are Nickle Metal Hydride batteries.  In fact, the odd form-factor of my bicycle headlight batteries is no accident - they produce a different voltage (3.7 volts) than most Alkaline batteries (1.5 volts).  So the choice for recharagable batteries (that fit a standard AA or AAA slot today) is limited to NiMh, although one company makes a Lithium Ion AA battery with a voltage reducer built in.

It is a bit confusing for the average person!

UPDATE:  I researched this further and some readers have been helpful.   The problem for the NiMh batteries is that they are 1.2 volts, not 1.5 volts as with alkaline batteries.   So you have to live with a slightly lower voltage, which should not affect most electronics.

Lithium-Ion, on the other hand, as I noted, are at 3.7 Volts, which means they are ill-suited for plug-and-play replacement with Alkaline batteries, unless some voltage correction is implemented.

Like I said, I think the ultimate answer is down the road - when new appliances come with built-in batteries, like your cell phone already does, instead of removable "cells".

As for Golf Carts, EZ-GO is indeed selling a Lithium-Ion cart, which will no doubt be the wave of the future.  As for retrofitting older carts?   Probably like trying to retrofit older appliances with newer batteries - just not cost-effective or convenient.