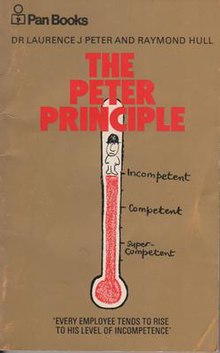 Is it really true that we all rise to our level of incompetence?


In a previous posting, I opined that the way I got major raises in my salary wasn't by "asking for a raise" but by getting more and better skills to qualify me for better jobs.  From laboratory technician, to Electrical Engineer, to Patent Attorney - these were the major raises in my life.

However, I realized the moment I said this that it could be taken by some as an impetus to get one of those dubious "online" advanced degrees that they are pushing on the Internet.  For only a few tens of thousands of dollars in impossible-to-get-rid-of private student loan debt, you can get an advanced degree and qualify for a better job!

Well, in theory, this works, but in reality, maybe not.   Getting an online degree or a degree from a "for profit" college isn't the same as a law degree from Harvard - or even lowly George Washington University.   And I should have mentioned, in that previous posting, that when I was designing circuits for UTC, I was going to school at night to work on my EE degree - in effect getting the job before I got the degree.   The same is true for Patent law - I was writing cases and working on litigation while going to night school.   For me, these degrees were just certificates I needed to keep the job I already had, not some wild bet on a possible new career down the road.

Others are not so fortunate.  They sign up for one of these online deals, promised that they will get that "executive" job with the corner office right after graduation, as they are now "qualified" for that position.  But there is a big, big difference between having a degree and having experience and skills.  You can go to college to be a business manager and be a shitty business manager who drives companies into the ground - my Dad exemplified that.

On the other hand, if you have a job skill and experience - as I had - you'll find people lining up to hire you, with the degree merely a formality as a job requirement.   I learned more about circuit design by designing them.  I learned more about the law by practicing it.   School is fine and all, but a lot of what is taught isn't really relevant to your career, other than to teach a certain mindset.

But getting back to our topic, does the Peter principle make any sense - and is it useful to an individual in making career decisions?  Is it possible you have already reached your level of incompetence?   Or are you merely an underachiever who has yet to recognize their own abilities.  Or maybe an overachiever who has elevated himself far higher than he is entitled to go?

The Peter Principle states that:

It is an interesting concept.  And in a way, it is a self-fulfilling prophesy.  Anyone's career can be characterized this way - we all work our way up the ladder, so to speak, until our careers stall at a certain level - at least most of us do.   Few end up continually moving up forever in life, if any.

And the concepts of underachieving and overachieving are interesting, but also could be just crippling labels that we like to slap on people, particularly in an academic environment.  The underachiever is deemed to be a smart person, but for whom, for one reason or another, does not live up to their potential (sounds like my 5th grade report card!).

Perhaps there is some truth to this.   Throughout school, I was capable of getting much better grades than I did, but I was bored, stoned, and depressed most of the time.   It turns out that your emotional state is as important as your mental abilities.   So I ended up dropping out of college and taking slacker jobs, for the most part.   It was only when I stopped smoking pot that I realized that not only did I want more out of life, that I was capable of more.

Low self-esteem drives a lot of this.  People who are smart and productive end up falling down the economic ladder because they let emotional issues dictate their lives.  They spend too much time worrying about the past - their dysfunctional parents, their horrific four years of high school - and forget to appreciate the present or plan for the future.  And the sad thing is, with all this introspection, they learn nothing.   The past can be instructive, if you use it as a means of learning and growth.  It is self-destructive if you just use it as a means of feeling bad about yourself.

Perhaps I was an overachiever, though.  Overachievers get ahead not through intelligence or skill, but simple brute-force hard work.   You could say I did that, working several jobs at once, going to night school for 14 years, and butting my head up against the wall again and again, until I punched through (Thermodynamics - three times!  I did finally get an "A" in it!).

But that is the problem with these terms - they are just labels, and labels are not very useful, other than in terms of symbolism.   It is like people trying to argue that Abraham Lincoln was autistic - or gay.  What does it mean, other than to slap a label on someone - but label-slapping is in vogue these days.   Is your child transitioning yet?  Which gender do they present?

And in a similar manner, the Peter principle might be worthless as well, as it doesn't really present any good advice for managing people in a work environment or in managing your own career.   It, does, however, provide endless amusement for employees who want to tag their bosses' foibles - he can't help it, right?  He's reached his level of incompetence!  That explains everything!

There is another principle that may tie all of this together, and I call it the "Dirty Harry Principle."  In that movie, Clint Eastwood is given the line, "A man has got to know his limitations!" which in effect, touches on all three of the principles discussed above.

If you understand what you can and cannot do, I think you can be happier in life.  Because we can't all be rock stars or even YouTube stars, and that's OK.   The vast majority of us will be plebes and unfamous and unknown.  To quote About Schmidt, once we are dead and everyone who knew us is dead, it will be like we never existed.   And that's OK, too.  Once you accept your insignificance, it is a lot easier to be happy in life.

Others take a different tack.   They posit that it is "unfair" that others are making so much money and are so successful, and "but for" the actions of others, they would be similarly wealthy.   And maybe they have a point - the system is unfair and people who are utterly incompetent end up floating to the top of the septic tank.   On the other hand, complaining about the wealth of internet billionaires on your facebook page or through a tweet or on a message tagged with "Sent from my iPhone" is the ultimate in idiocy.   Here you are handing over your money to these people, and then complaining that they "took" it from you.   Sheesh.

(I digress, but the recent revelations that Trump had a "secret" dinner at the White House with Mark Zuckerberg and right-wing Trump supporter and Facebook Board member Peter Thiel are quite interesting.  Any liberal or Democrat who maintains a Facebook page is, in my mind, an utter hypocrite.  It would be like decrying global warming with a bumper sticker on your monster truck!).

Overachiever, Underachiever, Level of Incompetence - these are all just labels.   Be happy with your station in life, and if you can't earn more money, figure out ways to live within the salary you have.  Odds are, earning more is just a way to get onto a bigger hamster wheel, not a way of getting ahead.