Flipping a Coin - The Gambler's Fallacy 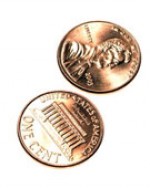 Basic probability is beyond the minds of most consumers.


Note:  This is an older draft that I put aside a few years back and only completed today.

As I noted in The Problem of Risk Assessment, people have a skewed idea when it comes to the laws of probability.

Consider the simplest probabilistic event - a coin toss.  I would not have a hard time convincing you that, for a normal coin, the odds of it landing heads up or tails up would be about 50%.  If you toss a coin, there is a 50-50 chance it will be heads.

Now, if you toss a coin 100 times, chances are, 50 times it will be heads and 50 times it will be tails.  And most people go along with that.  But within that 100 tosses, there may be a string of heads or tails in a row.  This is to be expected, and is not some "streak" of headness or tailness that can predict anything.  If you flip 10 "heads" in a row, it does not mean you are "due" a tails anytime soon, or that the likelihood of "tailness" has gone up.  Each flip is still a 50/50 proposition, and even if you flip 100 heads in a row, the next flip still has a 50/50 chance of heads or tails.

It is a probabilistic distribution.  Suppose you have a classroom of 100 students and have them each flip a coin 100 times.  Most will flip about 50 heads and 50 tails.  But a few will be skewed toward a 70/30 mix (or 30/70) and if you plotted out the distribution, it would follow a Bell Curve:

So you might have one student who flips mostly heads and another who flips mostly tails.  But that does not mean either is "lucky" or has some inherent "headness" or "tailness" in their flipping.  And it does not mean that they are "due" for another heads or tails or the opposite.  Each successive flip is.....50/50 chance of either outcome.

And these skewed ideas make them more prone to doing dumb things like gambling or in making poor investment choices.

Gamblers will hold two very contrary ideas, in their heads, with regard to probability - at the same time.  For example, if I flip a coin five times, and it comes up heads each time, a gambler would argue one of two things.  First, they might say the coin is on a "winning streak" and thus more likely to come up heads.  Alternatively, they will say that the coin is "due" for a tails, and the probability that the next flip will be tails is higher.  This latter argument is known as The Gambler's Fallacy.

Neither argument holds water.  The next flip has a 50/50 chance of being heads or tails.  Period.  But a lot of people don't see this.  Even some so-called smart people try to obfuscate this.*  And this illustrates why the gambler mentality is so idiotic.  Gamblers - often the same gambler - uses both kinds of "logic" in making risk assessments, even though they contradict one another.   In other words, neither theory holds any water, but either can be used as a justification to place what they believe to be a winning bet.

And Casinos know this, and thus promote the idea of being "on a winning streak" or "on a roll".   And when it comes to slots, they don't discourage the idea that a machine is "due" for a payout.  If you go to a casino and play the slots and the machine doesn't pay out, as you get up to leave, some addicted gambler will jump right in there to play, as they feel the machine is "due" for a payout, according to their theory.   For the most part, this isn't the case, however.   The machines are programmed to play randomly, and the machine doesn't "learn" that it hasn't paid out over time and then decide to reward the next spin.

And this illustrates how easy it is to sucker people into gambling (or "gaming" as they like to call it).   Since most people struggle to understand the basic laws of probability, it is easy to get them to put down money on long-shot odds, that, over time, will drain their pocketbook.   The law of probability dictates it to be so.

If you go to a Casino and play a wheel game that pays out 99 cents for every dollar played (and that would be an astounding payoff, most games pay back far less than this) eventually, over time, you would lose all of your money.   Every hour you played, you would end up with less and less money, until eventually, you end up broke (which is why they put ATMs in Casinos).

And the odds are stacked in the Casino's favor all of the time.  They have to make money - to pay back construction loans, pay for all that staff, free drinks, the cost of the machines and tables - and make profits, often huge profits.   It is very rarely that a Casino goes bankrupt, and when they do, it is either because they don't have enough customers (saturation of the market), inept management or over-expansion, or the Mob was involved, and the bust-out was a strategic move they actually made money from.

But gamblers don't see this.  When I look at an expensive and glitzy casino, I see the hard-fought wages of the gamblers that paid for all of this.   Gamblers, on the other hand, see a glitzy casino and see the opposite - that somehow the casino is going to pay them because, well, the casino has a lot of money and  can afford it.    The casino has a lot of money - your money - but they don't hand it out to the customers.

The "gaming industry" knows all about this, which is why they promote the gambler's fallacy, and they promote the image of gamblers as suave, sophisticated individuals, like James Bond (in the modern context) or as daring scoundrels, such as riverboat gamblers, in the historic context.   Either way, they are promoted as people who are sophisticated and smart, and not the blithering idiots and morons they usually are.   Go to any casino sometime, and see all the lower-class people, often in bathrobes and pajamas (or sweatpants) gambling what little money they have, away, in an obsessive-compulsive manner.   It isn't pretty, glamorous, or funny.

One of the basic problem in finances in America is that Americans suck at math - and are proud of it. "We don't need to know math in real life!" they cry, and then wonder why they are broke and in debt all the time.   For them, money is a mystical thing - one day it rains buckets of pennies, and the next day, there is a drought.   All you can do is pray for rain - or pay money to a rain-maker.

As I put it in that earlier posting:


And that is the point of this posting.  Not to stay that some people are stupid idiots who blithly ignore the laws of probability in daily decision-making, but that most of us do this on a regular basis.  We all secretly believe in "luck" or predestination or whatever.  And even the most astute mathematician might buy a lottery ticket now and again.

So long as we choose to be ignorant, we will be easily fleeced.  When simple things like fractions are seen as "hard" (and I believe that many school systems, over the years, have instilled a fear of math, and fractions, in their students, perhaps on purpose) then concepts like compound interest will be seen as supernatural.   Such folks will go into debt and stay in debt, convinced that only if they can get another loan, will they be able to get ahead - not realizing they are burying themselves further.

It is sad.   But is ignorance a destiny or a life choice?   You decide.

* Mr. John D. Cook, PhD (pronounced "Phffffd!") obfuscates this by arguing that if you have ten coins that are 50/50 heads and tails, placed under a cloth, and you pull them out one at a time, and five in a row come out heads, the odds of the next one being tails is higher.   Indeed, if ten in a row were heads, the odds of the next one being tails is 100% or 1:1.    But that is not the same thing as flipping a coin, where the outcome is not predetermined.   In his scenario, the coins are already flipped and merely being revealed ("sampling without replacement") in a different order.  Sadly, Google's "AI" interface chooses his answer if you ask the question, "am I due for a tails if I flipped 10 heads in a row?"  However, if you read his blog posting carefully, he points out that for flipping a coin, each flip is an independent random event.  You have to be careful using Google to answer questions!

** "And if the student who flipped 30/70 kept flipping 100 more times, or 1000 more times, chances are, his ratio would eventually tend toward the 50/50 mark."  This statement of mine bears comment.   It is not that the overall ratio will trend toward 50/50 as more tails are "due" only that the initial result of 30/70 will be diluted by subsequent flips of 50/50 over time, to the point where the overall trend will be closer to the norm.  Each flip is still a statistically independent event.
Newer Post Older Post Home