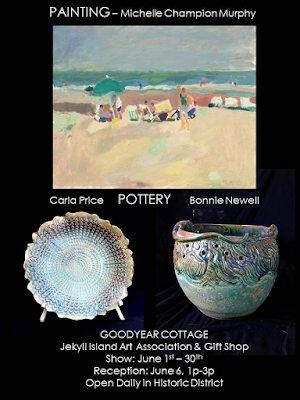 Well, we sent all those Mexicans packing. How's that working out?

Today was an odd day.  We spent the afternoon in the golf cart, driving around to various restaurants, bars, hotels, and gift shops, putting up posters for the Arts Association.  Every month there is a new show in the gallery, and in addition to advertising in the paper, on Facebook, and wherever else, we put up these posters all around the island.  The local merchants are very cooperative in this regard.

This Sunday, there is a reception for the artists.  Small snacks and wine is provided, free of charge.  I am to bar-tend.  Here is my wine list. Don't miss it!

As you can see, we sort of punished the Pinot Grigio people.  We have a  budget, so none of the wines are very expensive.  Hey, it's free!  Don't complain!

Anyway, putting up the posters was a lot of fun, driving around the island in the golf cart and seeing the sights and whatnot.  The new hotel is almost complete, and they are putting the finishing touches on the new condos at the marina.  A good excuse to get out.

Mark spent the morning help "hang" the show - although mostly he was there for the "3-D" artists, setting up the pottery on pedestals and plinths.   So he was ready for lunch, and we thought we would eat out at a restaurant, which is not typical for us.  Someone recommended the oyster po'boy sandwiches at the Jekyll Market, but when we got there the place was mobbed.  The whole island is packed - on a Tuesday!  We have been gentrified and people are "discovering" our little abandoned island.  No doubt, my videos were to blame.

So we were disappointed, as Mark didn't want to wait.  Too bad, too, as I am sure they were good.  You can't help but like a grocery store that has a bar in it, serving draft beer.   Makes those $8 jars of pickles seem more attractive.

So, where next? Well, Rob's Place - the Sunrise Grill!  Best fried shrimp in Georgia and the beer is ice cold and..... they are closed!  This is not usual, but after a slammed weekend, the staff needed time off.  We've been a fan of Rob since he was bartender at the Hampton Inn, making the best fried shrimp and other appetizers in a kitchen the size of a closet.   But maybe next time.  Everyone needs a day off.

Hey, there's this new restaurant that opened up where the ill-fated Jekyll Seafood Company was located - "Sweet Georgia's Juke Joint."  Maybe they have some hot wings and cold beer.   The menu was very limited and kind of pricey, but what the heck.  Well, we get in there and in front of each chair is a plastic puck epoxied to the table or bar, saying you have to download an "app" by taking a picture of this barcode, in order to order your food.  So in order to do this, I need to download an app that allows me to scan these codes to download the app.  Then I have to download the app, then order my food.  The bartender (we are sitting at the bar) offers to help me download the app on my phone, rather than just pouring me two beers and ordering a dozen wings.  So we noped out of that.

OK, what the heck is going on?  A quick review of the Google reviews tells the tale - they can't get help, so instead of having waiters, they have an "app" which is fine for McDonalds, but not for a sit-down restaurant.  Big signs up front announce that they do NOT take cash, either (not that it matters to me).  For a fast-food place, maybe I could see this - downloading an "app" for Mickey-D's might make sense.  For a one-time purchase of food at a restaurant that has two locations (one in Atlanta)?  Nah.

We are starting to see a pattern here.  The Jekyll Market is overwhelmed with customers and not enough staff in the kitchen.  Rob has to close because his staff is exhausted.  A restaurant resorts to apps to replace waitresses.   This is weird.

So where to go?  Well, Rob took over the Golf Course restaurant and the tourists don't know about it.  So off we go.  We get there and it is not crowded.  Two beers and oyster Po'boys and boy they come out scalding hot and melt-in-you-mouth.  Rob knows how to run a restaurant!  So our crises is averted, for the time being.

We got back in the golf cart and drove around to put up the posters, including at a local hotel where a friend of ours is a manager.  She pulled in behind us and gave us a big hug and looked very sad. "What's the matter?" we asked.  "I've been working 12-hour shifts for a week now, without a break!" she said.  And of course, as a salaried manager, no overtime.   I felt bad for her, but it was the same old story - no one will work!

On to the Villas by the Sea - home of the very reasonably-priced Driftwood Bistro restaurant serving "down home" Georgia cuisine.  There is a line out the door - two-hour wait for a table!  The reason stated by the staff for the delay is lack of help.  We tell a hapless foursome about Rob's new place at the golf course.  Hope that helped.

On the way back, we stop at Tortuga Jack's to put up another poster.  Same deal - they are slammed and not enough help to handle the crowds.

It is almost like God is trying to beat us over the head with this.  Businesses are short of staff and help.  Help wanted signs are everywhere.  The local Dollar Tree has bare shelves and a stockroom overflowing with inventory because no one will work stocking the shelves.   This is just getting out of hand.

Why is this happening?  I think there are several causes, some short-term, some long-term.  The problem will not go away quickly:

1.  Unemployment:  We keep extending unemployment benefits, just as we did during the recession of 2008, when "Help Wanted" signs proliferated as well.  What's worse, with bonuses provided to unemployed workers, many were making more money on unemployment than when working.  In addition, many States suspended the requirement that you be "looking for work" so people could just sit at home and do nothing and collect a check.  It is Andrew Yang's socialist fantasy brought to life with horrific results - restaurants turning to automation to replace missing workers!

2. Immigration:  Trump's stupid wall kept no one out, but his aggressive immigration policies sent a lot of people back.  Maybe the person waiting on you at the table wasn't from Latin America, but the busboy or the dishwasher might have been.  With those jobs vacant (and no American willing to take them) restaurants are struggling.  And let me tell, you, having worked as a dishwasher, it is a messy, disgusting job!

3. Aging Population:  So many baby boomers are retiring and the next generation isn't quite as large. As I noted early on in this blog, the age pyramid looks more like a minaret these days.  It is not that the next generation is smaller only that it isn't large enough.   There are too many people not working and not enough people to work to support them.

So what does this mean?  Well, Katie-Bell, it ain't quite the end of the world.

First of all, the extended unemployment benefits will end, eventually, just as they did in 2009, and people will go back to work.  More liberal immigration policies will mean more foreign labor to fill some of these jobs that Americans simply won't take.  And many older people - many who did not save for retirement - will go back to work to make an extra buck.

Some of these places are paying $15 an hour - that's thirty grand a year!  At one local store, they had a sign up saying, "Now Hiring!  Interview NOW, Go to work NOW!"  In other words, none of this, "We'll get back to you!" nonsense, but rather they put the Wal-mart smock on you and put you to work stocking shelves, right away.

Thirty grand?  Might not seem like a lot to you high-flyers who have "careers" but it is what I live on, quite comfortably, right now.   I might consider something like that, part-time at least, to supplement my income, or more precisely, reduce the need to tap into my 401(k) for another year.  It is nice also to have something to do.  I mean, volunteering to put up posters is fun and all, but it is much more fun to get paid to do something.

So I suspect many an oldster will look at these "Help Wanted" signs and say, "Why Not?" just as a friend of mine, who has a generous pension, went to work at a number of places, as he "likes to keep busy" - and that is an admirable trait.

Over the long run, the situation will sort itself out.  Nature abhors a vacuum.  But part of the problem, as I see it, is that to attract more people into the labor force, wages will (and are) going up.  People have been whining about a $15 minimum wage for many years.  Funny thing - it has pretty much arrived, not due to legislation, but because employers are desperate for workers.

But higher wages means higher prices.  Lunch was $60 and I can't afford that very often - it buys an awful lot of groceries!  So with higher prices (inflation) a lot of older people who stopped working may decide to go back to work, as they may perceive (rightly) that you can't be too thin, too young, or have too much money.  For those who cannot go back to work, this means retirement could get ugly in a real hurry, as their finite resources are not enough to pay the bills.  They will have to live in a vacuum.

In the meantime, I think we will be making more meals at home.  It costs far, far less than eating out.  On the other hand, we are not equipped to fry oysters at home!    Sadly, only after we were finished (and stuffed with food!) did we realize we could have easily split an entree and saved a lot of money, and our waistlines.