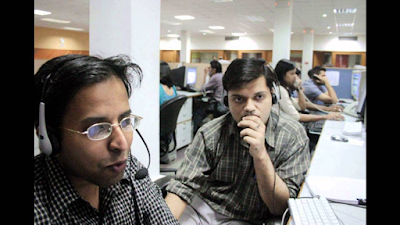 Call center scammers are real sons of whores...
In recent months and even weeks, the telcos are getting better at identifying scam calls, which I think is a result of a recent communications act.  More and more scam calls are identified as "possible SCAM call" on my phone.  Of course, I can tell they are scams, as they are from Northern Virginia area codes, which is designed to trick me into thinking they are from a friend or someone I know locally, as my phone has a Northern Virginia area code as well.  The joke is on them, though, I haven't lived there in over a decade, so getting a phone call from area code 703 is a sure sign of a scam (the people I do know from NoVa are in my contacts list, so it is easy to spot them!).
That being said, I am sure they will find a way around this latest hurdle.  The scammers are like our squirrels.  You can put up obstacles and "squirrel-proof" feeders all you want, they just figure out ways around the latest obstacle.  It is like the CAPCHA anti-robot pictures, you are just training the neural net with each response.  The shit never ends.
Recently, I have been getting such calls from 800-numbers.  I got one the other day, and curious (which killed the cat) I called back and got a weird answering machine message (that sounded like someone was recording it on their phone) saying I should have received a survey from "my health care provider" about CoVid-19 and I should visit my "Health Care Provider Website" to fill out the survey.  Well, Ambetter had no such survey, so I am not sure what they are talking about, and the recording is so cheesy that I have to think it is a scam of some sort - the call-back number sounds legit but in fact, isn't.
The fact that the people on the answering machine don't identify themselves or their organization is pretty much key.  If this was legit, they would at least say they were from the CDC or whatever.  Oh, shit, I just gave the scammers an idea.  Sorry!
I looked up the number online and found this interesting entry, which reads like a white paper on phone scammers.  By the way, I am not sure I would recommend "robokiller" or any other service that you pay money for, to spike robo-calls.  Like I said, the telcos are doing a better job of identifying scam calls (so hard to do - they can detect when a phone number is spoofed).   And in the future, I suspect these sorts of calls will become even easier to identify - if we light a fire under the telcos.  Letting them sell us a "no scams, please" service only incentivizes them to allow for scam calls.
Anyway, I thought his approach was interesting, but swearing in Hindi is tricky:

Fake "Medicare Health Center", "Medicare Options", "Medicare Rewards", "Medicare Advantage", "Senior Benefits", "American Benefits", "Insurance Solutions", "Insurance Enrollment Center", or "Health IQ" Medicare and life insurance scam by criminals phoning from the Philippines.
This is a massive and widespread identity theft, health insurance, and Medicare healthcare scam by Puta'ng Ina Ka criminals calling from the Philippines using thousands of different spoofed phone numbers and mainly preying on seniors to steal your credit card number, Medicare and Social Security numbers, and personal information to commit Medicare fraud and identity theft under the pretense of saying that they will help you obtain health insurance, Medicare supplement plans, and burial expense or life insurance.
This Filipino scammer, with more women than men in their overseas phone room, asks for you by your name to sound like a personal phone call to gain your trust, but they are randomly auto-dialing everyone. Scammers use huge phone database listings of millions of names with phone numbers and addresses to have the autodialer display the name that is currently dialed. If you decline their fake scam, they sometimes threaten you, saying that you need their fake insurance or else you can be arrested or fined.
This call center also runs a similar auto insurance scam, pretending to be either Allstate, Farmers, State Farm, or tries to sell you fake car insurance, or car or home warranties, or pretends to be a fake loan company or fake debt collector.

I looked up "Your mother is a whore" and that translated to वेश्या की संतान - veshya kee santaan not "Rundi Ka Bacha" so I am not sure if his Hindi swearing is on target.   In fact, the only place I could find "Rundi Ka Bacha" was in the Urban Dictionary, which I have often found to be full of shit or at least full of sons of whores.  But perhaps it is slang.  I notice "Rundi Ka Bacha" is the username of several people on social media.  They call themselves sons of whores?
The idea of keeping them on the line and frustrating them sounds like fun, but wastes a lot of your time.  But perhaps it works.  I notice more and more of these scam calls are "hang ups" and perhaps they have a database of time-wasters.  So the robo-caller calls me, and when I say "hello?" the computer connects me to a telemarketer whose computer screen shows notes from earlier callers, perhaps something like 'Time wasting rundi ka bacha!" and they hang up, knowing I am not buying an extended warranty or timeshare or whatever.
Of course, Lenny is the king of wasting scammer's time.  And there are so many scams out there that old people fall for - the "Windows Tech Support" scam is still going on, I think.  The Do Not Call registry turned out to be a bad joke - allowing people to sue directly, those who call them.  But of course, you can't sue someone in  India, even if you could track them down.  And the use of "survey calls" for scams has made us all so suspicious that actual polling data is now skewed badly.
And yes, it may be tempting to play blame the victim when people fall for scams.  But as I have noted before, I have been drawn into some scams, at least initially, and if you are not paying attention, it isn't hard to be spoofed by a wrong number or a convincing scammer.  As I noted above, it is like programming a neural network - the scammers get more sophisticated and better with each iteration. Meanwhile we get older and more confused.  If you plot these two trends on a graph, there is an inevitable intersection point where the scammers get good enough and you get senile enough that, well, they empty your bank account.
You have to hope that intersection point would occur only after you are dead, or that it occurs at a time when you are in the rest home and have no access to a phone, computer, check book, or credit card.  Only then are you safe.
So blaming the elderly or the unsophisticated for falling for a scam is pointless.  Scammers recently shut down medical computers and indeed, a whole pipeline system, simply by making targeted e-mails directed at employees at the company in question.   All it takes is for one single employee to open an attachment in a rogue e-mail, for the entire network to be contaminated.  At one law firm I worked at, this happened, and ironically, the person who opened the .exe file was our IT professional.
Curiosity killed the cat, and don't you really want to click on that link or attachment to see if there are really "hot pictures of your wife!" on the Internet?
We've all seen them, you know.  Click here to find out!
Newer Post Older Post Home