Another Day, Another Scam.... 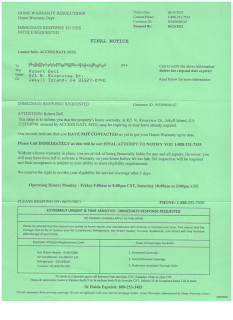 Scams aren't funny and they should bother you because they are an attack on civilization itself.  That, and they are on the rise.

Scams bother me.  Some people say, "Well, you'd have to be stupid to fall for a scam!  Those people get what they deserve!" - which is just blaming the victim.  Yes, you should not walk down a dark alley at night, but if you are raped, robbed, or murdered, it wasn't your fault, but that of the rapist, robber, or murderer.   Of course, defense attorneys would (and do) argue otherwise, which is why they always try to put the victim on trial, not the defendant.

Scams bother me on a number of levels.  The first is that they are on the rise and have been for decades.  Al Gore once famously (or fatuously) said that we are moving from a manufacturing-based economy to an information-based economy.  I will take that a step further and suggest that we are moving from an information-based economy to a fraud-based economy.  When so much "information" out there today is clearly fake, how can such an economy succeed? It is a lot easier (and far more profitable) to scam people than to do business with them.  Eventually, we will spend all day defrauding each other, rather than doing actual work.

The problem is, of course, that scamming has gone mainstream. Back when I was a kid, shysters and con artists weren't so hard to discern.  There weren't so many of them, as each Police department had a "bunko" squad who chased such gypsies out of town. Ordinary merchants offered reasonable deals.  Your local banker paid 3% "bank interest" on your savings and loaned out that money to local people in 6% mortgages and pocketed the difference.  Maybe there were no screaming deals, but there were no ruinous rip-offs, either.

Today, in an era of 3% mortgages and fractional savings (and near-zero fed rates), Banks offer 22% credit cards to middle-class people, and the friendly people at the payday loan place offer 300% interest to the very poor.  You can make more money today by ruining your customer than by doing business with them.  No one cares about their business reputation anymore or "repeat customers."  It is assumed that every customer you deal with will be browned-off at you, but since every other merchant is offering shoddy, deceptive deals, what are people going to do?   The cable companies knew this - and perhaps today they may be paying the price.   Or maybe not.

But beyond that, shoddy deals erode away our civilization.  Scratch a Qanonsense believer or an Antifart Activist and you get the same thing - a person who is upset with society because their personal lives are a train wreck.  Whether it is ruinous student loans or an upside-down mortgage they've been struggling to hold on to since 2008, these are people for whom the American Dream turned out to be a nightmare.   Their education - if they have one - turned out to be worthless, and every merchant they deal with basically loots their wallet.  It is all so unfair, and as far as they are concerned, our society isn't worth maintaining. They pine for the end-times, or the zombie apocalypse.

Now, of course, it is easy to play blame-the-victim, as I have done here in this blog.  These folks made a series of shitty choices in life, often egged on by the industries offering these shitty choices.  The College Industry promotes the idea that a college degree - any college degree - will make you wealthier, and they use backward-looking statistics going back to the 1960's to make this point.  And yes, back in 1968, a degree in "Liberal Arts" might get you a job.  Today?  Not so much.

Similarly, the blue-collar worker never saved a dime from his cushy union job, but relied on the pension plan and health insurance provided by the creaky, money-losing steel mill. Mitt Romney buys the mill, guts the benefits and underfunds the pension and suddenly, their world comes apart. Yes, they probably shouldn't have gone on strike for two years to demand wages double those prevailing in their area.  They are to blame for the choices they made.  But of course, it is too late to unbark the dog.

The problem is, in both cases, these folks feel they have nothing left to lose in our society, and that is a dangerous thing.  The 1% has a vested interest in keeping the 99% happy, or at least not miserable, as the 99% outnumbers them, well, 99 to 1.  When people start to think that working hard and saving money is only for chumps, they stop working hard and saving money and instead think that voting for Andrew Yang is the answer.  Free Money!  Why bother trying?  And that is how civilizations fall.

Which is why it is obvious to anyone who thinks for even a microsecond, who is promoting these sort of things. Maybe such movements originated organically, but foreign forces certainly do their best to amplify such discontent on the Internet.   And I say this with certainty, as it is well documented that the same foreign influences have been at work for decades, and in fact, our government does the same thing, by trying to influence elections in foreign countries, or destabilize foreign governments.

Yet, people spread disinformation about even this.  Russia is our friend! they say, denying that the Russian Internet Research Agency even exists, or that ransomware attacks are going on daily.

It seems that the sheer volume of scammery is increasing every day.  Since sending e-mails and texts and setting up websites is basically cost-free or of very low cost, you can attempt to scam millions of people at a time, for only pennies. Every day, I get dozens of scam e-mails in my SPAM box - a box created to accommodate the incredible volume of this stuff.  My phone rings daily, exhorting me to buy an extended warranty or some other scam.  It never ends, these days - even letters in the mail (how old school!) arrive almost daily, pushing some scam or another.

Consider the one above.   The letter is addressed to me, and no doubt uses data pulled from "public record" or some other data source.   We've been living in our house for 15 years now, and never had a home warranty.  And while I have had a number of mortgages with Access National Bank (which was bought out by another bank several years ago - I was a founding shareholder) all of those were for investment properties.

Home warranties are not a wholly bad deal.  For a few hundred bucks, you can offer one, as a seller, to qualm the fears of buyers, particularly first-time buyers, in a normal real estate market.  Today, well, right now you can ask whatever price you want, no matter the condition.  But back in the day, it was an incentive many used to sell their home, or something buyers bought if they were nervous.

However, no home warranty company is going to offer to "extend" a warranty 15 years after purchase. It is just a SPAM letter, hoping to snag someone who is nervous and fearful - and this is an excellent example of why fear is never an emotion to be trusted. The "home warranty" is fraudulent, period.  They take your credit card payment over the phone, send you some official-looking documents, and figure you won't file a claim for months - if ever - and never realize the scam.  Even if you file a claim, well by then, they have closed up shop and moved along.

And I can say this with certainty as they are lying to me from the get-go - saying the home warranty I never bought has expired, on my house which is mortgaged by a company that never held the mortgage.  You don't need to spelunk this deal to see if it is a scam, any business deal predicated on a lie, no matter how trivial, will go downhill from there.  So getting a letter like this, with obvious mistakes, misstatements and lies, well, you need not try to figure out if the home warranty company is a fraud or not.

Notice how the top of the page, which appeared through a window in the envelope, says "To the Order Of" as if it were a check, and also "FINAL NOTICE" as if it were an overdue bill.  Both of these are lies, small lies, to get one to open the envelope.  But lies nevertheless.  And I just think it's swell that my postal person thinks I am not paying my bills!  But then again, she probably delivered the same piece of junk mail to everyone on the street.

And like I said, such warranties have uses - but you have to buy them from a legitimate company at the time you buy your house.  You can't wait until your roof leaks and then try to buy a home warranty and think you are going to get a free roof out of the deal.  No shit, some people really think that way.  They think they are going to "pull a fast one" on a major multinational corporation. And those corporations like to let you think you are getting away with things like that, with free flyer miles and BoGo bonuses.  I know way too many people who go on frequent cruises and claim to have gotten away with some great freebie because they knew the secret tips 'n tricks.  Disney people are the same way - buy the annual pass and spend $10,000 and you get a free tote bag!  Betcha didn't know about that!

But nothing in life is free and Their Ain't No Such Thing As A Free Lunch (TANSTAAFL!) and when we try to seek out free things or too-good-to-be-true bargains, well, that's when the scammers get us.  And by scammers, I mean not only the outright crooks in the world, but the companies trying to throw pennies at us, hoping we spend dollars.  And yes, this is blaming the victim - but again, you kind of sort of have to these days, as there is no way to go after many of these scammers, as often their business model is perfectly legal, because our "free enterprise" friends in government legalized their scams.  Payday loans exist only because we decided to allow them to exist.

Scams make me angry - or sad anyway.  Because they are corrosive to our society.  And sadly, today, so many people get scammed and then want the government to bail them out.  Republicans decry such bailouts, but then again, they were the same ones who voted to make the scams that people fall for, legal.

Maybe we can put a stop to a lot of this nonsense, or at least try to.  At one time in this country, we tried to stamp out bad bargains, scams, and rip-offs.  Today?  Well, we just shrug and hope it isn't us who gets caught in the trap.

Somehow, I don't think that is a good plan.