People Much Smarter Than Me... 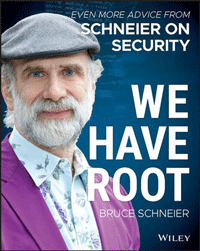 There are lots of people in this world a lot smarter than me.  But what they have to say is important based on what they are saying, not because they are smart.

A reader sends me links to two interesting articles about Bitcoin.  The first is about the security of Bitcoin and how it is somewhat laughable - after all, so many exchanges have been hacked, and so many Bitcoins have been lost or stolen.  And when that happens, you have no recourse, as no one runs the damn thing.  If you have a $100 bill and you put it through a shredder, you can mail the pieces to the Treasury Department and they will send you a new $100 bill.  There are people in the loop, and mistakes and errors can be corrected.

Contrast this to the guy in England who threw away his hard drive, thinking his Bitcoins stored on it were worth only pennies.  Today, they are worth millions.  He is trying to bribe the local council to let him dig through the landfill to find the hard drive.  It is sad to read about.  It reminds me of the guy who lost a winning million-dollar lottery ticket and was so despondent he killed himself.  The Bitcoin is the ultimate bearer bond, it seems. You lose that piece of paper (or stored encryption) and all is lost, irrevocably and for good.

But the weird thing about Bitcoin and other "blockchain" cryptos is that the "ledger" contains a list of all transactions for all "coins" for all time.  Imagine the dollar bill in your hand has a list of every transaction it has been used for, as well as a list of the trillions of transactions of every dollar in the United States since December 23, 1913.   As you can imagine, this document would get rather large in a hurry.  What's worse, people are vandalizing the ledger by inserting garbage text, prayers, photos, pornography, classified government documents, etc.  It isn't hard to see why each new "coin" takes longer and longer to "mine" and why each transaction takes longer and costs more.  And the ledger can never, ever, be edited.

The second article concerns trust, and this is an interesting take on Bitcoin.  People claim Bitcoin is more trustworthy, or more precisely does not rely on trust.   And as a person with trust issues, this is appealing, until you realize that a computer has no trust at all, other than to do as it is programmed to do.  And if the GPS says drive off a cliff, well, it will drive off a cliff.

Cryptocurrencies are not useless. They are functional money. You can pay with them.

They give a bank account to billions of unbanked people.
They provide an exit from defunct currency systems such as in Venezuela.
They make international payments far cheaper and quicker.
They are a way for companies to save credit card fees which are 1-3%.
They make micropayments possible which the existing financial system seems unable to provide.
They are programmatic money enabling lots of new use cases and innovations. Any teenager can now receive and send money programmatically. No licenses.

All of the above statements are patently false and easily provable as such. They are not functional money, and no, you cannot pay with them.  I am not sure where "tobi" is coming from, other than to cheerlead for a currency that has never had any currency.  Taking his items one at a time:

Bank accounts?  Sure, you can set up a "wallet" with an "exchange" but to fund it, you have to link it to a bank account with money in it.  Yes, there are a few "Crypto" ATMs out there, but they are few and far between.  Even if you could "fund" your exchange account with your unbanked cash, since you can't spend it anywhere (see below) it isn't really a functional bank account of any sort.

As an "Exit" for a "defunct currency" I suppose he has a point - provided that the country in question doesn't outlaw the exchanges, as China is poised  to do (or is doing) to prevent such a capital flight.  But this illustrates that the only real uses of Bitcoin and other crypto are to skirt the law.

International Payments cheaper and quicker?  Maybe when the system was new, but today, it can take hours to "decrypt" a transaction in a mining machine(s) and the electricity required is staggering - and hence the costs involved.  Exchanges don't operate as charities, and charge fees for sending and withdrawing money.  A traditional wire transfer is now faster and cheaper than Bitcoin.  In fact, my European friends tell me they can do this from their phones, in a matter of minutes.

Save on credit card fees?  Not bloody likely on two counts.  First, the cost of Bitcoin transactions can far exceed that of credit card fees - in the tens if not close to a hundred dollars.  The fantasy of swiping your phone and paying for your Starbucks with Bitcoin will forever remain a fantasy - and it doesn't look like any of the other "coins" have cracked this problem either.   Second, no one takes it as payment, other than drug dealers, arms dealers, human traffickers, and as we learned lately, computer hackers.  And unlike credit cards, there is no recourse if your "coin" is lost or stolen.  I've had credit (and debit) cards "hacked" more than once.  I never lost a penny in those transactions.
Micropayments?  Again, make me laugh.  I am going to wait a half-hour or more and pay ten or twenty bucks so I can pay someone ten dollars?  It just isn't feasible.
Programmic Money?  I am not even sure what that is, but a "teenager" buying Bitcoin is problematic, as when he reaches age 18, he can renounce any contract he signed (including the one he signed with the exchange) which is why no one lends money to or contracts with, minors.
The funny thing is, and no one seems to want to ask this question, is that Bitcoin has had over a decade now to show it can work as a currency - so proponents (including the Sooze) have pivoted to calling it "virtual gold."  How long before the plebes see through that one?  For at least the last five years, it has been more expensive to process a bitcoin transaction than to use a credit card, at least for very small, everyday transactions.  As this site explains, the cost varies and is unpredictable, as it depends on the volume of transactions on the network (!!).  So you make a purchase with bitcoin and the cost is... unknown.  Sounds swell.
Businesses like predictability as they can plan around it.  Republicans have been pushing this false narrative that businesses hate regulations and want them all abolished, as they are "holding back" America from being an economic powerhouse (which it already is).  The plebes, who never ran a business, bite on this nonsense (and Bitcoin, too!).  But the reality is, Businesses would prefer fewer regulations to comply with, but what they really want is consistent regulations that don't change from day to day, month to month, or year to year.
California decides that any product with a "cancer-causing chemical" has to be labeled, and businesses balk at the burden.  Then they realize that all they have to do is label every product they sell as containing cancer-causing chemicals in the State of California (but apparently cause cancer nowhere else) and they are  in the clear.  A small change to the owners manual, or, as was the case with a piece of knock-down furniture I bought a few years back, a slip of paper stuffed in the packing box, with the requisite warning - that's all you need do.  Done.  Finished.  Move on.  Leave it be.
Predictability is what business wants, which is why the car companies fought Trump on loosening emissions and mileage regulations - they had already budgeted for this, in production plans that go ten years out.  Ford doesn't want to throw away all the R&D that went into their new hybrid pickup truck (a neighbor has one - makes my King Ranch look like a model T!) or their new electric pickup.  GM doesn't want to throw away all the carbon credits they bought from... Elon Musk.  Steady as she goes, is what they crave.
So it seems unlikely to me that "business" would want to jump on the Crypto bandwagon, other than to do a splashy press release (as Kodak did) hoping it might spike the stock price.  It is like all the hoopla around "AI" and how everyone is falling all over themselves to be "diverse" these days - in a year, much of it will be forgotten.
A "currency" that drops by more than 50% in value in a matter of hours or days isn't feasible or predictable for business - or even for the individual.  Even in the worst days of the recession of 2008, I didn't lose but maybe 1/3 of the value of my portfolio, over a period of months.  And even then, by the end of the year, it had recovered all of the losses. Compare the volatility of anything - any other currency, commodity, real estate, stock, or whatever, and Crypto comes up lacking - shooting up and down in value in response to millions of minions responding to tweets of celebrity influencers.
This is the future of "investing"?
I think not.
Newer Post Older Post Home